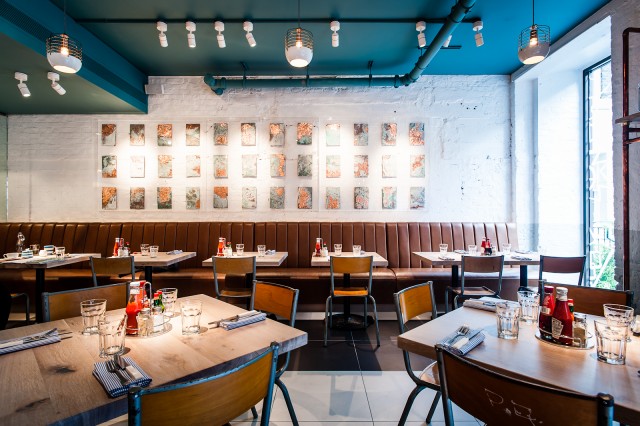 Fish and chips has gone gourmet. It began with Bonnie Gull on Foley Street. Having started life as a pop-up seafood shack, its unprecedented success led to a fixed site in Fitzrovia, complete with the obligatory blue and white seaside interiors and an offering of responsibly sourced British fish. Noting the trend, savvy D&D London, owners of Le Pont de la Tour, Le Coq d’Argent and Launceston Place among many other restaurants, were quick to get in on the act and hook London up with another classy chippy. 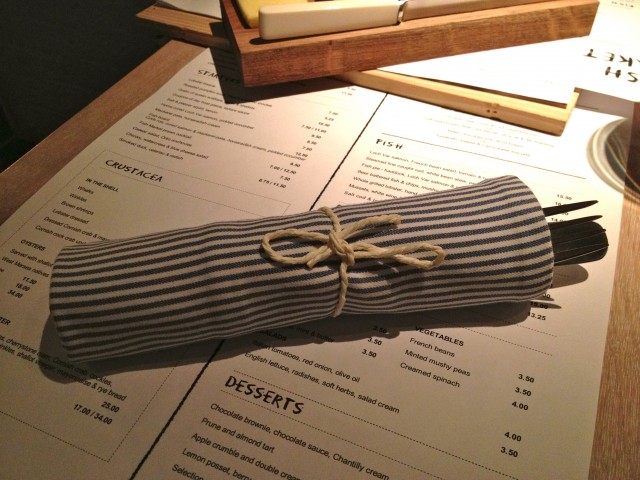 Fish Market’s interiors don’t disappoint. On my visit one cold December night, the entrance was paved with flickering tea lights and lanterns. Inside, brick walls are bright white, the ceiling a nautical teal and the floor formed of black and white tiles.

Lining the back wall are chocolate brown banquettes, coupled with casual wooden chairs that wouldn’t look out of place in a primary school. The light fixtures are industrial – filament bulbs in steel grating, while pipes are exposed and licked with teal.

Above the banquettes are a series of seascape art works made from copper and dried rock salt, which add an air of authenticity to the beach hut feel. Tables are square and wooden, each prepped with a Heinz ketchup bottle, vinegar, and Tobasco sauce for the oysters. A particularly notable touch are the blue-and-white striped napkins, each tied with string into a boating knot. There’s something delightful about the interiors. Stepping inside, the stresses of urban life ooze out of you. It’s a slice of the seaside in the City – throw in some pebbles and a low-flying seagull and the chic shack fantasy is complete.

A marble bar dominates the back of the restaurant, proudly displaying a modest collection of crustacea for imminent nibbling, from red-clawed Cornish crabs to slippery Colchester rock oysters and beady-eyed king prawns. The unpretentious, all-day menu is split into light bites, starters, crustacea, fish, mains and sides.

The hunky manager informs me that all of the fish is freshly caught. The restaurant works with six suppliers across the UK, from Brighton to Hastings, and receives a delivery every morning. It takes its quest for quality so seriously, it closed for two weeks over Christmas and New Year as it wouldn’t have been able to guarantee the freshness of the fish.

Ravenous, I chose a dish from each of the sections, beginning with mini Cornish crab pasties. Served on a circular black slate, the plump morsels were piping hot and crammed with flavoursome brown crab meat. Filled with derring-do, I ask for ½ a pint of winkles.

They arrive on a bed of ice, curly black shells glistening wet and redolent of the ocean. I venture into one with a toothpick and gouge out its innards, my stick revealing a slimy, slug-like creature. I wasn’t wild about the texture, but this was no fault of the kitchen: I’m just not a winkle kind of girl. Much more pleasing was a platter of golden plaice goujons cased in crunchy breadcrumbs, which, when smothered in homemade tartare sauce, were as comforting as a cuddle from granny.

The prawn cocktail, presented with a king prawn balancing atop the Mary Rose sauce like a crescent moon, was perfectly pleasant, but textbook rather than envelope pushing. The standout dish was the salt & pepper squid served on a sheet of white paper with a slice of lemon and a pot of addictive aioli dip. Lightly battered and with a fiery underbelly of chili, spring onion and garlic, the squid strips were finger-licking good and devoured disconcertingly quickly.

DIY dressed lobster meanwhile, which required an instruction manual to deconstruct, came with a pair of pincer-shaped claw crackers. Staying true to its origins, it was served naked in its shell, devoid of dressing or sauce.

While the meat was deliciously sweet and juicy, it would have been enhanced with a side of lemon mayo to add a further layer of flavour. It was like Marilyn Monroe without make-up – beautiful, but lacking the wow factor it so often possesses. Beer battered fish and chips meanwhile, was on point: crispy golden batter revealed a swan white interior, accompanied by moreish minty mushy peas and thin, pleasingly salty, hand cut chips.

The compact, 80-bin wine list, presented attached to a side panel of a wooden wine case, is led by style with a white slant due to the fish heavy menu, with each wine chosen for its food pairing capabilities.

A glass of Château de La Négly, Côteaux du Languedoc 2011 paired well with the goujons and squid, its iodine notes echoing fresh sea air, enhanced by hints of peach and pear. A 2009 Byron Pinot Noir from Santa Barbara meanwhile, charmed with a perfumed nose of juicy cherry and tart raspberry, and a soft, generous, fruit-driven palate.

Desserts are filling and comforting, the highlight being a piping hot apple crumble served in a miniature white bathtub with a jug of double cream, its rich, crunchy top revealing silky warm apples inside.

While Fish Market isn’t reinventing the wheel, it has created a relaxed, convivial space that evokes happy childhood memories of holidays by the sea. And while some of the dishes are lacking the X factor, the food is undeniably moreish and comforting, and the wines well judged. If you’re stressed out and looking to escape London without leaving it, then Fish Market’s your plaice.