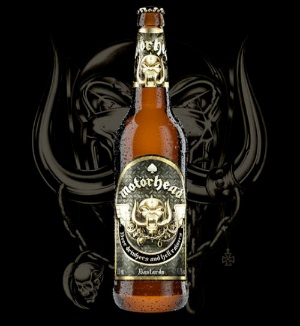 Named after the band’s album “Bastards”, the lager joins Motörhead Shiraz and a vodka.

So far the wine is reported to have sold over a quarter of a million bottles since being released last year, although it has been banned in Iceland due to alleged links between the band’s name and drug abuse.

The beer is brewed in Sweden by Krönleins and for the moment is only available in the country through the government monopoly Systembolaget.

The band’s fan site described the beer as: “For all beer drinkers and hell raisers, fans of loud and fast rock and roll, no matter if you have no class or if you are a damaged case, this mean machine lager is fuel for any head banging opportunity.”

At 4.7% the beer’s alcoholic strength is slightly less rock ‘n’ roll than the 7% ale recently released by the monks at a North Yorkshire monastery but Motörhead is not alone among rock groups in releasing wine and beer lines for their fans.