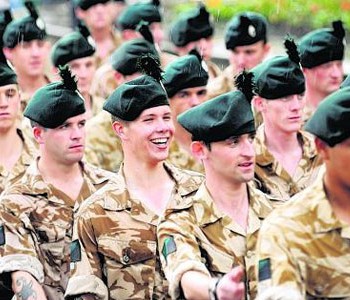 BBPA Chief Executive Brigid Simmonds, who is a former army officer, explained that many brewers and pubs work tirelessly to raise money for militarily charities across the country, and tomorrow is a key date in the fundraising year.

“Appreciation and respect for our armed forces is a cause that people feel very strongly about,” she said.

“Every pub is the heart of its community, and every community has brave young men and women serving their country in the armed forces, supported by their local pubs.”

Many pubs will be hosting fundraisers on the day, and there are many ongoing campaigns in the trade supporting our armed forces.

Among the best known is Kent-based brewer Shepherd Neame’s Spitfire Premium Kentish Ale beer, which was launched in 1990 to raise money for RAF charities on the 50th anniversary of the Battle of Britain. Since then, charity activities associated with Spitfire ale have raised some £100,000, and the brand’s tongue-in-cheek World War II styled advertising campaign has a cult following.

Tetley’s, owned by Carlsberg, is running a programme of support for Help for Heroes this year, which aims to raise at least £100,000 for the charity during 2012, as well as helping licensees to engage customer support for the charity.

Another campaign, “Beer for the Boys” has delivered over 60,000 free beers supplied by brewers to servicemen and women flying home from Afghanistan on RAF TriStar aircraft, which are operated by 216 Squadron.  Alcohol is not available to British troops whilst serving in the Middle East, so the service gives those returning an early, and especially welcome, taste of home.  The scheme is the brainchild of Wing Commander Steve Chadwick, formerly Officer Commanding 216 Squadron based at RAF Brize Norton in Oxfordshire.