Guillaume d’Angerville of Domaine Marquis d’Angerville has said he believes that Asia will “shape Burgundy in the next 10 to 15 years”.

Speaking to the drinks business at a tasting of the 2010 vintage organised by the domaine’s agents, Justerini & Brooks, Corney & Barrow and Armit, d’Angerville (pictured) stated that the movement away from more traditional markets was palpable.

“I can see the pendulum swing,” he said. “Traditionally, Burgundy exports have been focused on the US, UK and Japan but I believe that going forward, China and Hong Kong will grow at the expense of the US, UK and even France”.

He stressed that he was not about to abandon buyers in those three traditional markets and said he was sincere when he praised the work done by the three merchants.

But with the growth in the Far East he predicted that his exports would grow above the current 75%.

“I will not deny the UK at all,” he continued, “I will have to reduce other regions to supply Asia, probably France and Scandinavia. Continental Europe in general”.

However, d’Angerville expressed some concern about the future of Burgundy and in particular on the effect of money on the younger generation that is beginning to take over from their parents at what is becoming a crucial time for the region.

He explained that 1959 was “crucial” for the region, catapulting it forward in terms of quality and recognition and with it rises in price for both the wines and the land they come from.

The generations behind that vintage and its immediate aftermath are now dying or handing over control to their children.

The effect of the Napoleonic Code and the partition of a property between siblings means that some are now owners of land and property worth a lot of money, which will continue to rise as interest in the region grows.

D’Angerville stated: “The important thing for me is that Burgundy must keep its soul. I hope that money will not change that.

“But there are big tensions now in families that there wasn’t before and I think there is a risk of implosion.” 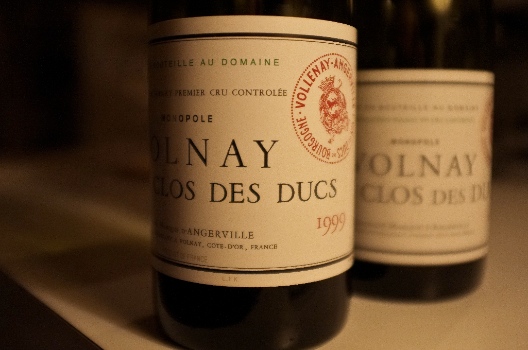 As with Domaine de la Romanée-Conti’s co-owner, Aubert de Villaine, d’Angerville is keen to lessen the investment grade of his wines by keeping them in the hands of collectors as far as possible.

However, he conceded, somewhat ruefully, that it is inescapable that wines from the region will rise in value.

The likes of DRC, Jayer and Rousseau have led the way but he recounted that he was “very impressed” at a dinner in Hong Kong two years ago with the “level of knowledge about my wines among collectors aged 25-35”, and he said he thought that the market would evolve very quickly.

After the tasting, he extolled the virtues of his Clos de Ducs 1998, which he said was “totally underrated” as a vintage but “showing very well” and spoke with high praise of 2010, lamenting its small quantity but hailing it as “pure and precise”.