“Italians are particularly prone to the comfort and reassuring nostalgia of food. They eat with a childish verve and enthusiasm, and exuberant remembrance of their homes, their mothers, their lovers and their Vespas.” So says AA Gill in his review of Casa Batavia in this Sunday’s Style magazine in The Sunday Times. 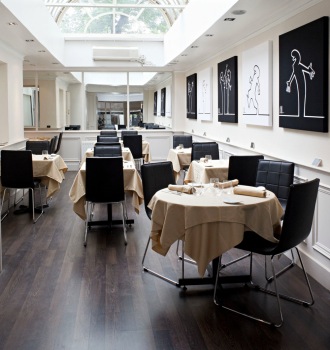 The Vespa reference is a national stereotype too far, but I get what Gill means. Italians have a love of food unequalled throughout the world.

They worship at the altar of food, the architecture of their day built around what they are going to eat and with whom.

Nicola Batavia is a self-confessed “eggspert”. I met the chef a month ago at a Castello Banfi dinner at Camden curio Gilgamesh. His arrival at the table was met with much fanfare and clapping of hands, like the returning of the prodigal son.

Unfamiliar with his oeuvre, I felt in the presence of a world-famous celebrity that had somehow slipped through my net.

Peering through a pair of neon orange specs, he tells me, in a Dalínian fashion, of his beatific reverence for eggs – of their mystic duality: the hard and the soft, the white and the yolk; the eternal conundrum.

Mention is made of a truffled egg dish, which recalls treasured memories of Spuntino’s truffled egg on toast. Noting my enthusiasm, Batavia invites me to try the dish when he’s next in town to cook it.

The Michelin-starred chef found fame in Italy with his Ristorante Birichin in Turin. He now has a regular spot on Italian TV, a book, wine line and olive oil to his name. This summer, he teamed up with seasoned London restaurateur Paolo Boschi to launch Casa Batavia on Kensington Church Street.

White walls, black leather chairs and polished wooden floors lend an air of austerity to the space, which is softened by playful graphic prints by Italian cartoonist Osvaldo Cavandoli.

The interiors are so pared down they border on corporate, but a glass-domed roof lends much-needed light to the proceedings. Tablecloths are a tasteful beige, mirroring the hues of the ladies who lunch that populate the room.

Boschi is so old school you couldn’t invent him. He takes my (beige) coat and sits me at the window table, in full view of the Notting Hillbillies passing by.

Our feast gets off to a good start with a cupful of crunchy, lithe grissini sticks served with Batavia’s bright green, grassy, Umbrian olive oil.

With it we’re served a generous-sized Riedel glass of Gancia Alta Langa Brut 2007. Aged for three years in oak, the northern Italian sparkler glints gold in the glass, offering a rich and toasty nose of honey and hazelnuts that could give vintage Champagne a run for its money.

We’re then presented with a silver slither of skate wing served with capers, tomatoes and olives.

Soft as swan’s-down, the fish is tremendously tender, and enhanced by the autumnal accoutrements. The embodiment of Batavia’s 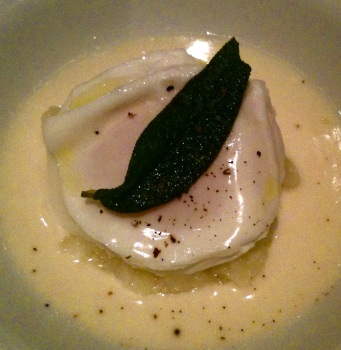 Then it arrives. I can smell it coming. The famous truffled egg. Hopes are high. Poached, it looks beautiful in the dish, nestled in a pond of potato fondue, a solitary sage leaf balancing on top like a fallen feather.

The egg is expertly cooked, its orange yolk oozing into the cheese pool below. Rich from the truffle oil, it’s decadent, delightful and comforting beyond belief – what baby food would taste like in heaven.

To follow is a trio of oxtail ravioli blanketed with a snowflake-shaped shaving of Parmesan. Packing a flavour punch, the Parmesan has the intensity of a fresh cheese straw and works well with the tender ox meat.

Astutely autumnal, Batavia is spookily in tune with the seasons, like a culinary weather vane.

To match, the sommelier suggests Andrea Oberto Giada Barbera d’Alba 2005. An attractive bright ruby, the nose bursts with black cherry, plum and forest fruits. Growing in intensity on the palate, blackcurrant notes give way to a chocolate and liquorice finish.

Mid-pour, the affable young wine waiter tells us he’s from Narni in Umbria, explaining that C.S. Lewis named his imaginary land of Narnia after the Umbrian hilltown, having stumbled across it in an atlas as a child. 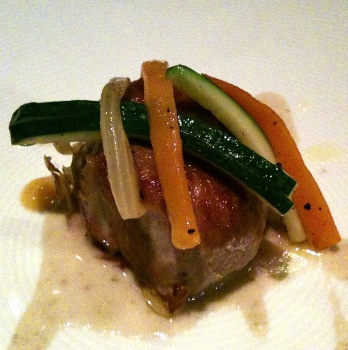 The final flourish before dessert is Batavia’s signature dish: pork tonnato in a rustic tuna sauce, latticed with courgette and carrot.

Usually made with cold cuts of veal, the juicy medallion of hot roast pork loin is textbook.

Dessert doesn’t reach the highs of the main event, though a devilish bowl of molten chili chocolate doused in Amaretto lifts the spirits, while a Lavazza espresso from a bespoke machine imported from Italy delivers an invigorating and smooth caffeine kick.

Judging from earlier reviews, the curious Haribo fried egg sweets presented with the bill have been wisely replaced with almond-filled biscotti.

Casa Batavia is unmistakably a neighbourhood restaurant. Though heaving on my visit, Batavia made the effort to talk to each customer individually, gauging their needs and tweaking their order accordingly. You’d never get that level of service in Soho or Mayfair.

My only criticism is that dishes are delivered at warp speed – we were served five in under an hour, giving us little time to luxuriate in the memory of what we’d eaten before we were onto the next course.

Eating out is all about the enjoyment factor. With the pace of life accelerating, it’s more important than ever to be able to take your time over a meal and let the memory of each dish solidify in the mind before moving on, otherwise we’re just refueling.