A new British craft lager is hoping to take on the international giants of the premium lager market. 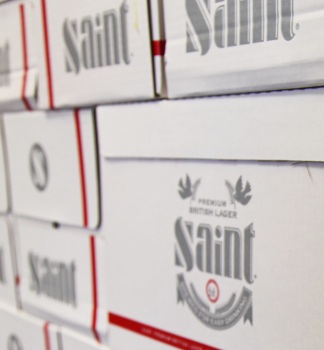 Saint is a 4.6% abv lager, representing the result of two years’ development by The Saint Brewing Co. in Manchester.

Promising “a distinct sharp citrus taste, floral and soft fruit notes, as well as a refreshingly light body”, the new product has been made slightly sweeter and less carbonated than many other lagers on the market.

The brand’s slogan, “Brewed for Easy Drinking”, aims to reinforce the idea of a fuller flavoured lager, which does not leave drinkers feeling bloated.

Gareth Whittle, managing director for The Saint Brewing Co. described Saint as “our response to the demand for more innovative beers that steer away from the overly gassy and bitter drinks produced by larger brewers. It’s completely new and best of all it’s genuinely British.”

Currently available to the on-trade only, Saint will initially be stocked in 330ml bottles by two Manchester bars, The White Room and Dukes92, before appearing in selected venues nationwide, including the Sanderson Hotel in London. Its price will be set independently by each bar.