Young and very ambitious, Stanislas Thiénot has international distribution plans on a grand scale for the Thiénot Bordeaux Champagne brands. 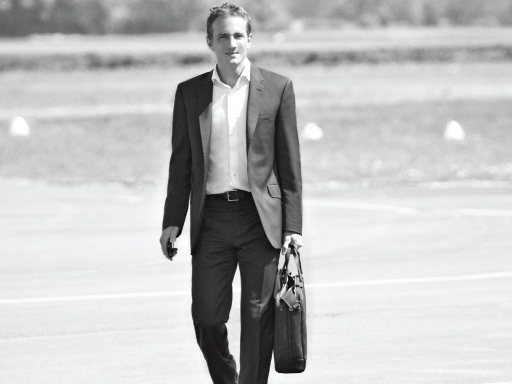 Founded in 1985, Alain Thiénot is the youngest house in Champagne, and its managing director and major shareholder, Stanislas Thiénot, born in 1976, must be one of, if not the youngest MD in the region.

And while it is fitting that the 34 year old should be heading up the 26-year-old brand, he is in fact managing a clutch of names within the Groupe Thiénot Champagne division, labels which are not only much older than him, but also his 71-year-old father, Alain, who established the company (and still works full time controlling the strategic direction of the business).

Among these is Canard-Duchêne – which the group bought from LVMH in 2003 – that will celebrate its 150th anniversary in 2018, a milestone which has inspired Stanislas to instigate a new look and marketing campaign for the brand, that is alongside an attempt to improve its distribution.

Indeed, Stanislas begins with news that Canard-Duchêne has become the second best-selling Champagne after Moët in the former French colony of Cameroon. Canard only began distribution in the country last year, but now shifts 5,000 bottles. “There’s the potential to sell 25,000 in the next three to five years,” he explains, adding that French communities in African countries such as Burkina Faso also offer an opportunity.

Stressing the importance of opening up such markets, he adds: “If you have a market of 25,000 bottles in 40 small countries, that’s a total of one million bottles.”

It’s Asia, however, that really excites Stanislas, and he speaks of his first shipment of Canard-Duchêne to China following an order for 6,000 bottles at Vinexpo Bordeaux. For Stanislas this market offers positive prospects in the long term not just due to its size: “China is 1.5 billion people, that’s more than the size of Europe plus the US”, but also because Groupe Thiénot has a major presence in the market with Bordeaux.

The company acquired 80% of CVBG (Compagnie des Vins de Bordeaux et de la Gironde) in May 2007, the region’s biggest exporter of fine wine, a move engineered precisely to open the door for Champagne in Asia, where CVBG has a powerful presence, according to Stanislas.

“CVBG is strong in exports and we are strong in France so we are complementary in distribution, there is a synergy,” he says, adding: “So this year we completely merged our distribution in France and the export markets; it is the same team now for all our wines and Champagnes.”

Before the purchase of CVBG, Bordeaux represented 1% of Groupe Thiénot’s business from three estates – Ricaud in Loupiac, Rahoul in Graves and Haut Gros Caillou in St Emilion – but today the wine region accounts for 55% of the company’s total E212 million (£184m) turnover.

This is highlighted by the title of Thiénot’s wholly owned UK distribution business, Champagnes & Châteaux – an office set up in 1989 when Alain Thiénot was beginning the slow process of building the brand in the crowded London Champagne category. “We opened up a subsidiary in the UK because nobody wanted to import us,” Stanislas admits.

Nowadays, however, Groupe Thiénot has its own offices in the UK, Germany and Hong Kong, so it is able to directly control the positioning of the company’s prized labels. “We want to bring better brand management,” says Stanislas.

But he also understands that the growth of Thiénot’s Champagne brands, above all in emerging markets, will take time. “If you look at all the new countries for wine in the last 20 years, for example Japan, it [the market for international drinks brands] started with whisky and Cognac, then wine, and finally Champagne… we had to wait until the end of the ‘90s.”

As for the development of the group’s sparkling brands over more recent history, he records, referring firstly to the 350,000-bottle Alain Thiénot label: “When we changed the labelling three years ago, 70% of its sales were in France, and of the 30% we exported, 80% of that was sold in the UK, so it was really only sold in two countries. But today we export 45% [of volumes] into 25 countries, we want to be an international boutique brand.”

Key to this expansion in size and scope has been the improvement in packaging, and post the Alain Thiénot relaunch in 2008, work has focused on Canard-Duchêne in time for its anniversary.

The final visible sign of this investment was revealed at Vinexpo Bordeaux this year, when, as reported by db, the brand unveiled its new-look prestige cuvée Charles VII, including a set of original names for the different blends, such as Le Victorieux for the brut and Cuvée de Beauté for the blanc de noirs.

The brand’s top cuvée was launched in 1968 for the centenary of Canard-Duchêne, founded in 1868, and Canard-Duchêne is planning to release back vintages in the approach to the 150th birthday, as well as a magnum of the cuvée to celebrate the date.

The marketing and positioning of the entire range has also been fine-tuned and centres on the environmental credentials of the brand with the strapline “Noble by Nature”. At the core of this new stance is an organic Champagne called “Authentic Green” made from a five-hectare certified vineyard owned by the group.

This site is enough to produce 50,000 bottles, but a further 50,000 will be available from 2015 when another five hectares of vineyard will achieve certification, ensuring Canard-Duchêne becomes one of the largest producers of organic fizz from the famous region.

Prior to this range addition and such cosmetic changes, the cellar master Laurent Fédou altered the style of Champagne to bring it more in line with the Alain Thiénot brand.

Stanislas says: “We are the youngest house in Champagne and we are proud of that, we focus on being young and modern, and we have a modern style of wine, which means we have fruit, freshness and finesse… when my father defined the style over 25 years ago he liked Champagne for its purity… and we want yellow fruit and not oxidation.” Hence, the Canard Champagnes have been made lighter and fresher, particularly the rosé, which was previously deeper in colour and more vinous in style.

And with the revised winemaking and marketing among the group’s strategic Champagne brands, the task of improving distribution can take place with confidence. As Stanislas states: “We need strong distribution to build our brands internationally, and we need to work on our brands to help build our distribution.”

But will the Champenois manage to build on the runaway sales performance of French luxury still wine brands in China? Considering the success of the Champagne-Bordeaux combination in other countries, including mature Asian markets such as Japan, it seems likely the diversification in tastes will incorporate sparkling too, and when it does, Group Thiénot will be among the first to benefit.

In the meantime, Stanislas says that the business should not forget its core customers. “We must be thankful to the French, British, Belgian and Italian consumers who are loyal to our brand,” he states, before pointing out something surprising in this era of European austerity: sales of Canard-Duchêne increased during the global economic crisis.