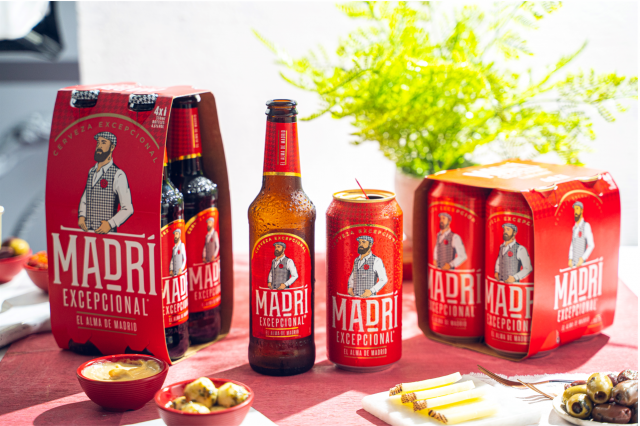 The beer, which has been available in British pubs and bars since October 2020, has now ramped up its presence and is already available in over 6,000 UK venues with its supermarket rollout planned for the spring.

The launch will be supported by a multi-million-pound investment to drive momentum behind the brand, including TV, video-on-demand, out-of-home and digital activity, as well as high-profile partnerships and activations.

Ryan Mclaughlin, marketing controller for premium beers, Western Europe at Molson Coors, told db: “World beers continue to increase their volume share of the beer category in the off-trade, and Madrí Excepcional’s crisp, refreshing double award-winning liquid and distinctive branding give it a real point of difference, which we are confident will help retailers drive sales in this growing category.

Mclaughlin added: “It has enjoyed a strong start in the on-trade after 12 months and is now available in over 6,000 pubs and bars across the UK, with one of the highest rates of sale in the lager category. We will be building on this momentum with a comprehensive multi-channel marketing programme to put it front of mind for consumers.”

Madrí Excepcional is a collaboration between Molson Coors and Madrid’s La Sagra Brewery and has been positioned as a beer that captures “El alma de Madrid” or “The Soul of Madrid” described by the brewer as “a modern European-style lager” that is “crisp, clean and refreshing”

The 4.6%-ABV beer sports branding inspired by the term “Chulapo” – originally a group of people in Spanish society in the 19th century, famous for their vibrant and elaborate style of dress that, today, represent the people of modern Madrid.

Carlos Garcia, founder of La Sagra Brewery and master brewer, added: “La Sagra is founded on taking the best of the diverse cultures that surround us and applying innovative brewing techniques to create great tasting beers that stand out from the crowd. These principles are shared by Molson Coors and by working together we’ve created something really special in Madrí Excepcional, a unique fusion of the Chulapo way of life and British brewing heritage.”