A three-day series of wine auctions as part of Sotheby’s Hong Kong’s spring sale has brought in an above-estimate total of HK$177 million from 2,600 lots. 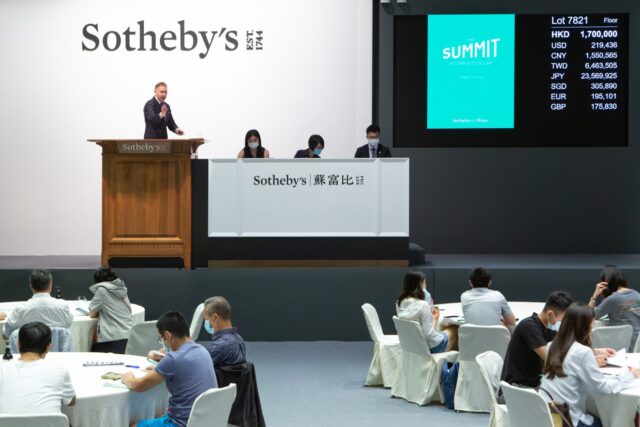 Sotheby’s Wine resumed live auctions in Hong Kong with a three-day series of wine and spirit sales held from 5-7 July. The sale concluded with a total of HK$177,087,500, marking the third highest-valued wine sale ever held in Asia.

The sale received enthusiastic bidding from collectors around the world. Nearly 90% of buyers placed their winning bids via phone, online and absentee bids, and almost one-third of buyers were under 40 years old.

A six-litre Methuselah of Romanée-Conti 1999 took the top spot, doubling its pre-sale estimate to sell for HK$2,108,000.

In the first sale “The Summit, A Complete Cellar”, the focus was on a collection originating from the cellar of an American wine collector. The total amount sold was HK$123 million. 93% of the lots were sold and 64% achieved prices their top estimate.

In the sale, DRC continued to reign supreme, dominating the top prices. Meanwhile, the sale also featured a selection of Rhône wines, including a case of Domaine Jean-Louis Chave Ermitage Cuvée Cathelin 1990, which sold for HK$992,000.

This was followed by a dedicated sale highlighting the private cellar of renowned international businessman Sir Dickson Poon, whose close links with the United Kingdom allowed him to source great quantities of the finest Bordeaux from trusted UK merchants and auction houses including Sotheby’s, in original cases and in many instances, on release.

98% of the lots were sold, totaling HK$19 million. The top lot was a 12-bottle case of Petrus 1970, which sold for HK$297,600. Meanwhile, a 12-bottle offering of Haut Brion 1961 exceeded its higher estimate to bring HK$235,600, showing the strong demand for mature Bordeaux from discerning collectors.

The final sale focused on rare wines and spirits, with 88% of the lots sold in an auction that realised a total of HK$35 million. DRC took the top spot again, with an 8-bottle offering of DRC Romanée Conti 2007, selling for HK$1,054,000. In the spirits selection, The Macallan 60-Year-Old in Lalique, Six Pillars, led the sale and brought in HK$744,000.

A private collection of Moutai was 100% sold, totalling HK$2,131,560, with all but one of the 22 lots achieving prices above their top estimates. Last but not least, a bottle of recently released Karuizawa The Aqua of Life 50-Year Old 1969 was sold for an above estimate HK$520,800.

Jamie Ritchie, worldwide head of Sotheby’s Wine, commented: “Whether live or online, out of Hong Kong, New York or London, our sales this year have proven that the appetite for wine transcends geographical boundaries, as collectors across different time zones are prepared to place their winning bids by any means.

“The combination of the presentation of the two exceptional single owner sales, the total sales of HK$177m, and the 50% of lots that sold over the high estimates puts Sotheby’s in pole position as the clear market leader in the region, with a long-standing reputation for sourcing the world’s top wines from the most prestigious collections.”

Adam Bilbey, head of Sotheby’s Wine, Asia, added: “We were delighted to pick up the gavel once more in Hong Kong and bring it down on a three-day series of unmissable wine sales, not least the two outstanding private collections which we were privileged to have been entrusted with.

“As we have seen time and again, great wines with great provenance have a proven track record, and even in these times of concern, our expectations were exceeded. With intense bidding from collectors in Asia, with whom we are hugely grateful, we hope this sets a trend for another successful sales season for Sotheby’s in Hong Kong.”