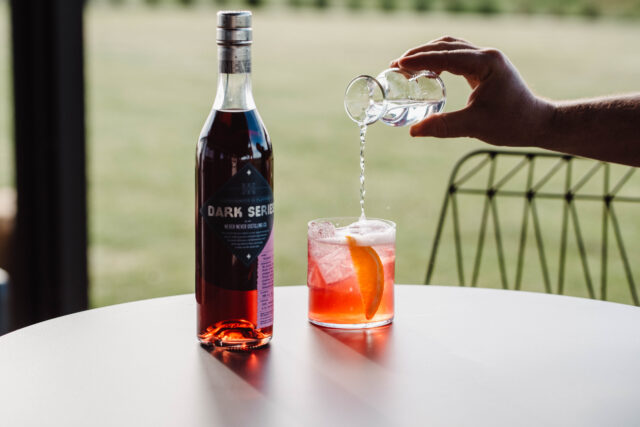 The new product, named ‘Ginache,’ is made of the distillery’s award-winning Triple Juniper Gin and Grenache using grapes picked from Chalk Hill’s Slate Creek vineyard. The Harveys, the family behind Chalk Hill Wines, have been growing Grenache in the McLaren Vale region for generations. The Grenache grapes used were harvested in March from the family’s plot planted in 1989 in Biscay soils.

“We wanted to make a product that championed not only McLaren Vale’s most exciting varietal, but also celebrated the relationship we have developed with the Harvey family,” says Never Never head distiller, Tim Boast.

“Grenache is an incredibly sustainable, hardy grape. We wanted to create a gin style that would be championed by locals and speaks of the wine produced in the region,” says Never Never brand director, Sean Baxter.

He adds, “we wanted to create a gin style that would be championed by locals and speaks of the wine produced in the region.”

As the distillery’s tasting note says, the cherry red with rose-gold hued gin imparts a bouquet of rose petals, cinnamon and fresh raspberries on the nose. For the palate, the gin shows a pink-lady tannin and a voluptuous mid-palate balanced with the sweet and spicy flavour profile, ending in a dry and long finish where coriander spice, savoury juniper and sour cherry lingers.

Just like most gins that use grape to flavour the base, the colour and flavour of the gin will change over time. “We definitely recommend drinking this one while it’s fresh and the fruit character is at its most vibrant,” says Baxter. “Over time the colour will deepen and the flavours will become more earthy.”

Since the harvest was small, the Ginache Dark Series release is limited to less than 2,500 bottles. A small volume will be reserved for guests visiting the distillery’s McLaren Vale home when it reopens in the coming months.