Picking during social distancing, an early harvest, and processing grapes in two months rather than four are just some of the ways wineries experienced an “unforgettably challenging” harvest in 2020, according to Wines of Argentina. 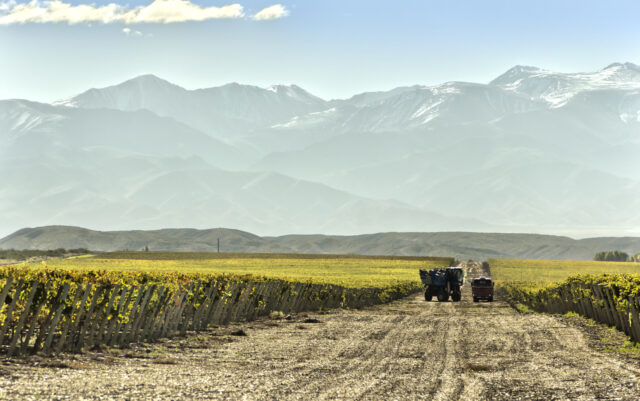 In its 2020 harvest report, industry body Wines of Argentina stated that “nothing about the 2019-2020 season has been usual”. As was the case over the border in Chile, the growing season was unusually warm and harvest came much earlier than normal.

In many ways, the global health pandemic, with lockdown coming into effect in mid-March, was just one of a number of hurdles wineries overcame in the past year.

A combination of high temperatures, drought, frost, an exceptionally early harvest and lower yields also made this year stand out.

The first point of note was the heat. With the exception of Cafayate and some other high altitude areas, Argentine vineyards experienced “historically high temperatures”.

While there are not yet official figures to support the conclusion, producers state that this was their hottest harvest in the last 50 years. Between five and seven heatwaves (a week of temperatures above 32°C) were recorded in most of the country’s wine-producing regions between December and March.

This was combined with a period of drought. Wines of Argentina said the growing season was “especially dry”. Snowfall in Mendoza was at its lowest level for the last 20 years, meaning rivers were flowing at 50% of their usual capacity, and at 11% lower levels than the previous year. Rainfall was also down a similar level (113 mm compared to 252 mm) and thus irrigation “was not always supplied at regular intervals”.

Wines of Argentina noted that none of those consulted for the compilation of its harvest report could remember such an early harvest. Having been forced to reduce irrigation, ripening was accelerated and harvest was brought forward by between two and four weeks depending on the region. Wineries thus had to manage the logistical challenge of pressing quantities of grapes that would normally be processed in four months, in just two.

While the frequency of hail storms was “average”, Wines of Argentina stated that the storms that did occur were “on unusual dates”. The Calchaquí Valley and Gualtallary in Tupungato were the most affected. In Mendoza as a whole, 7,007 hectares saw 100% damage, while a further 15,553 hectares were affected in some way.

Late spring frosts also proved to be a problem, particularly in the Uco Valley, San Juan, Mendoza and northern Patagonia. In Mendoza, 9,630 hectares were affected by frost, of which buds from 2,490 hectares were “completely destroyed”.

These factors led to a reduction in yield. On 26 April, Argentina’s National Viticulture Institute (INV) reported that 2.04 billion kilos of grapes had been harvested and processed. This compares to a decade average of 2.62bn kilos.

The report noted that this growing season has resulted in a “several unanswered questions”. The chief among them is how the grapes harvested “offer such freshness” in what has been a very hot year.

Fernando Buscema of the Catena Wine Institute noted how there was “no correlation” between temperatures and the resulting wines.

“Our hypothesis is that the lack of water was the key factor in accelerating ripeness while preserving acidity,” he said.

Martín Kaiser, agricultural engineer at Doña Paula, Mendoza, said: “There was dehydration, which might accentuate the relationship between acidity and polyphenols. The high temperatures in March might also be another key factor.”

Marcelo Belmonte, vineyard director at Grupo Peñaflor, said that the wine group has conducted its own studies.

“In our analysis, which isn’t complete, the most decisive factor in achieving the balance we’re seeing in the wines comes from a leaf-fruit ratio weighted towards the leaves. With the reduced fruit yield and the heat, the plants may be better able to metabolize compounds that result in more polyphenols.

“In all, this harvest was unique for a hot year in terms of acid preservation, good colour and fresh aromas. The reasons for this are being studied but experts are pointing to the lack of rain being a key factor,” he concluded.