Californian winemaker Randall Grahm has announced that one of his signature wines, that helped kickstart the ‘American Rhône’ movement, is to be discontinued – sort of. 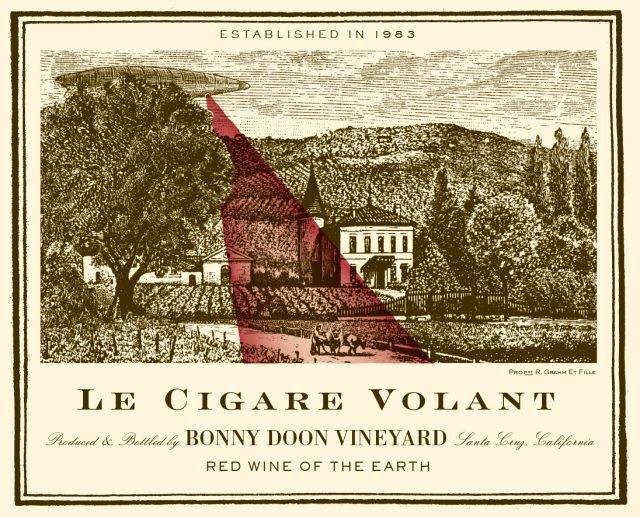 After 34 vintages, ‘Le Cigare Volant’ in is original form will be no more but Grahm announced that it will live on, with a tweaked blend under a new label in the Bonny Doon portfolio.

This new blend will drop the Mourvedre however in favour of more Cinsault in order to make a more affordable wine made in a lighter, “more approachable” style as Grahm related in a blog post last month.

He wrote: “I am saying goodbye to Le Cigare Volant, at least to the wine that I’ve made in a certain, distinctive style for so many years.

“It’s just a wine, of course, and presumably for as long as I continue to ply my trade, I will make other cool wines, maybe even a few ultimately far more serious or ‘important’ than Cigare, at least it is my fervent hope that I do. But Le Cigare is an old friend, arguably the wine that really boosted my career, gave me a certain degree of self-confidence in the righteousness of my path.”

Introduced by Grahm in 1984 using the principal Rhône varieties of Syrah, Grenache and Mourvedre, Le Cigare Volant became a cherished label in the pantheon of American wines.

The name is derived from an odd (but as Grahm noted “effective”*) 1954 by-law that prohibits UFOs landing in the vineyards of Châteauneuf du Pape.

Tickled by this eccentric officiousness, Grahm took the French name for UFO (Cigare Volant) for his first wine and it was an instant hit.

Its release gave a boost to Rhône varieties in California, spawning the ‘Rhône Ranger’ movement (a title initially given to Grahm by The Wine Spectator in 1989).

Although it is the wine with which he really made his mark, but, Grahm continued, in its current format he feels it has lost its relevance in the modern market.

“It has become,” he wrote, “a bit like the brilliant, slightly eccentric uncle whose bad puns, meandering stories and arcane references are amusing at holiday get-togethers, but maybe just once a year now seems to be about the right frequency for a visit.”

For Grahm it lacks the “pedigree of provenance” using as it does grapes blended from several areas. Furthermore, with some of the complex viticultural techniques used in its production, its current price and practice of holding the wine back before release it is just not paying for itself as it might.

One senses from reading his eulogy, that it is also no longer a style that Grahm wishes to make with his current outlook on wine and the authenticity, the ‘message’ he wishes to communicate. A sentence in the post illustrates this point neatly. Le Cigare may have shown off his “blending chops” but, “a wine that is merely the product of the winemaker’s imagination and aesthetic sense remains limited in its complexity and its power to captivate, enchant and create emotional resonance in the consumer; I believe that it is only vins de terroir, wines of place, that can express real profundity.”

He does say that more recent vintages of Le Cigare Volant have been among the best he has made (2017 being the last) and while the old Cigare may be departing this universe it’s only to allow space for another to land.

*Have you ever heard of any UFOs landing in Châteauneuf since then?