Assistant professor in the Department of Food Science at Cornell University, Sam Alcaine, is attempting to turn the by-products of New York’s Greek yoghurt industry into beer. 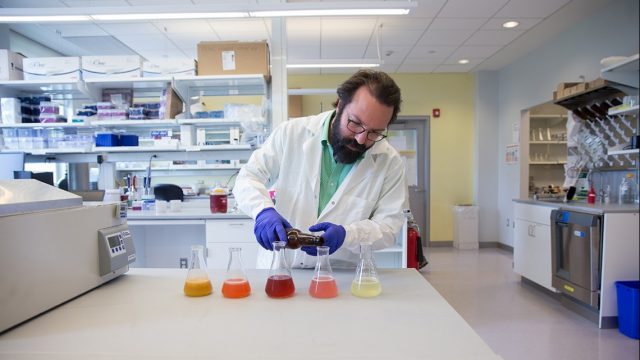 According to Alcaine, he has developed the correct mix of time and temperature than allows for the breaking down of lactose into glucose and galactose needed by brewer’s yeast to produce alcohol. He said that factors such as the breed of cow can influence the flavour in the finished product.

During trials, Alcaine has produced a low-alcohol beer (around 2.7% ABV) which had a sour and salty flavour similar to Gose beer, and other concoctions which share similarities with pulque, a traditional Mexican drink made from agave.

“There’s this whole movement around craft beer and spirits, but dairy doesn’t play in that space at all,” he said. “If we could convert whey into something that people want to drink, it opens an entirely new economic arena for entrepreneurs and brewers to explore and innovate within.”

“Right now, brewers use farm products like corn, rye and barley to make alcohol. Dairy is a natural addition, especially now, when consumers are demanding novel and interesting flavours,” he added.

However, there are actually some drinks producers that are already using whey to produce alcohol. Blaand, an ancient Scots drink which was introduced to the country by the Vikings, is an alcoholic drink made from fermented whey. It was made commercially available under the Fallachan brand, formerly owned by Humphrey Errington, the rights to which were bought by Arran Brewery in 2012.

In addition, dairy cooperative Arla Foods teamed up with Belvoir Brewery to produce a beer which includes whey. Having originally experimented with using the by-products of cheesemaking in beer back in 2010, the brewery now produces ‘Blue Brew’ under the tagline ‘Stilton infused beer’.

Outside of the beer world, Black Cow uses whey to produce its vodka while last year, scientists in Singapore developed a new “sake-like” alcoholic beverage from the bi-products of tofu called sachi.