The UK’s Wine and Spirits Trade Association (WSTA) is eyeing up opportunities in Hong Kong for British sparkling wine and gin exports, as the emerging wine country aims to increase its sparkling wine production volumes hugely by 2020, the chief executive revealed to dbHK.

“People are often surprised that English sparkling wine is priced at the same level as a NV Champagne, and the answer is [it uses] the same grapes, same methods but with less volume.” Beale commented.

Hong Kong has imported £80 million pounds worth of sparkling wines since 2013, of which 88% is Champagne, he added.

“Here in Hong Kong, 88% of the sparkling wine consumed is Champagne, as a result, there’s a good opportunity for English sparkling wine. A lot of people see the value in doing business in Hong Kong and that allows you to think about bits of China, but they understand they are very different, but that’s in the future,” he continued.

“For English sparkling wine, there’s not a huge amount of supply, and it’s a small market and its not as simple as saying you want to go in China or the US; you need to pick cities and regions. And for English sparkling wine it has been North American cities like New York, Chicago, San Francisco, Los Angeles. In Asia, it’s very clearly Hong Kong,” he noted.

In a few years, Beale estimates that the country’s English sparkling wine production is going to increase tenfold as new vines planted roughly 10 years ago will start to be productive, which will help bring the number of the country’s large-volume producers to six or seven by mid 2020. The total area of Britain under vine is more than 5,000 acres (2,000 ha), farmed by 470 vine growers with the grapes vinified in 135 wineries, according to Jancis Robinson MW.

Chapel Down, the biggest English sparkling wine producer in the UK, was among the wineries participating in the trade tasting. At the moment, only about 7% of its production is exported, but the winery expects the figure to grow to 15% in five years’ time, its sales and marketing director Guy Tresnan, told dbHK. The winery is “aggressively” buying up vineyards and planting vines, said Tresnan, in anticipation of growing domestic and overseas demand. 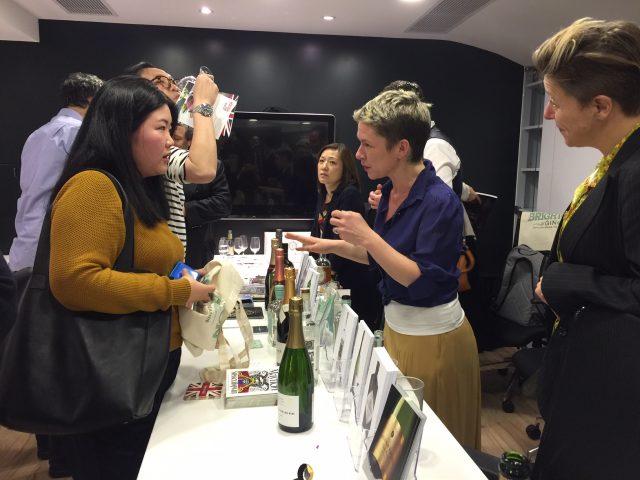 Speaking of the ongoing effect of Brexit on the English wine industry, Beale commented that while Brexit has meant a lot of uncertainties, with the value of the pound falling substantially, “if you are sparkling or wine producer, your product has just become better value.”

Speaking of other parts of Asia that the WSTA is targeting, Beale said that Japan is another key market, though Hong Kong consumers’ higher average spend on sparkling wine makes it, “more attractive”.

In addition to wine, Gin is another large category where the trade organisation is actively courting business opportunities, especially for premium and artisan distillers.

The fourth most popular spirit in Hong Kong, Gin only takes up about 10% of the local market but is the fastest growing category with 60% growth by value and 16% growth by volume since 2013, and as a category it is now worth about HK$88.5m.