LoneWolf: We’re a little more circumspect and low key than our BrewDog cousins

Doug Bairner, managing director of LoneWolf distillery, reveals his plans for the company as well as how its connection to BrewDog has helped shape the brand.

Officially launched in April 2017, BrewDog’s distilling arm LoneWolf, as the name suggests, wanted to set itself apart from the rest of the pack.

Like only a handful of Scottish gin distillers, it produces its own base alcohol instead of buying in a commercial neutral spirit.

“It is hugely important to us,” Bairner told the drinks business. “It means we can 100% guarantee the provenance and quality of every single drop of spirit in our bottles. It also means that we can play with flavours in ways that distillers using NGS cannot. We’re already working with different grain bills, and going forward we can work with different yeasts and bacterial introductions”.

Its association with BrewDog has certainly helped in this regard. “It means we get access to the best quality grain, raw materials and equipment for making our wash,” said Bairner.

In addition, the distiller uses Scots pine growing in the Cairngorms as a botanical in its gin, a further nod to its location and heritage.

Where the two producers do differ, Bairner states, is in their personalities. “We’re probably a little more circumspect and low key than our BrewDog cousins,” he admits.

Despite being only a team of nine, LoneWolf has its own onsite lab in which it is currently conducting a series of investigations.

“We have just been running analyses with our onsite lab to assess the impact of how our gin is stored after consumers open it on the flavour profile.

“We’ll be releasing a blog post soon to help people to understand how to get the most out of their gin collection on the basis of that analysis,” Bairner told db.

At a pop-up in Old Street tube station last month, the Scottish distiller celebrated the launch of its pre-mixed gin and tonic cans by developing its own gin vending machine.

Asked what inspired the move to introduce a gin and tonic in a can, Bairner said he’d sensed “frustration with the poor serves that were on offer from mainstream brands”.

“Most canned gin and tonics are around 5% ABV. A proper G&T, served as you would get in a bar would be above 8%. So we set out to give consumers a bar quality G&T in a can. Ours is at 8.8% ABV, in line with exactly how we would serve it in one of our bars,” he said.

Also in January this year, LoneWolf confirmed a distribution partnership with Global Brands which it hopes will increase its exposure to the market. 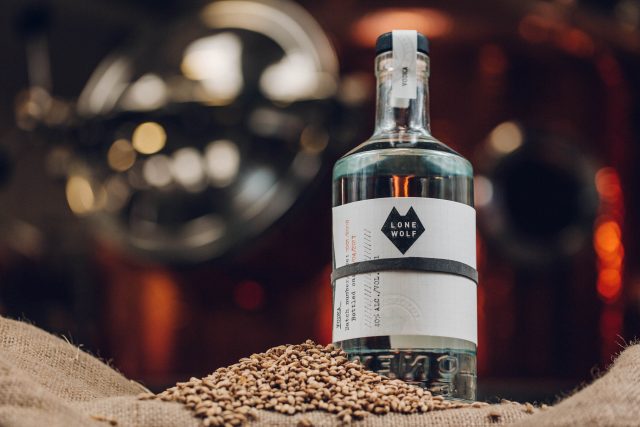 “We want to get LoneWolf into as many great bars, restaurants and hotels in UK as we can. LoneWolf is a small team of 9 people based in rural Aberdeenshire. Having 40-odd highly credible and passionate Global Brands sales and marketing people all around the country to help spread our word and get our spirits into the places where people go to enjoy a great G&T or vodka cocktail is amazing,” said Bairner.

The LoneWolf distillery is capable of producing 100,000 cases of spirits per year. It uses a unique ‘triple bubble still’ as well as what it claims is the tallest rectification column of any craft distillery in Europe.

“Every step in that process is, and will always be, delivered by hand by our distillers,” stressed Bairner.

As for his plans for the future, he told db that the team was already looking at its next phase of development that would see it produce more than its current 100,000 cases a year.

As well as its gin, vodka, canned G&T and limited edition gunpowder gin, barrel-aged vodka and cranachan vodka, Bairner stated that there will be “forays into new spirits entirely” as well as further pop-up experiences in cities across the country.

And like its prolific bar-opening cousin, LoneWolf hopes to open a dedicated bar “at some point” though this is something that they are not keen to rush.

“Craftmanship is about doing things the right way to make a great product and trusting that your sales and profit will follow rather than being led by the bottom line in the first place,” said Bairner.