Having been overlooked in the past, and its quality grapes used for blending, the arrival of the Symingtons has alerted the wine world to the potential of the Alentejo’s Portalegre sub-region. Sarah Ahmed investigates 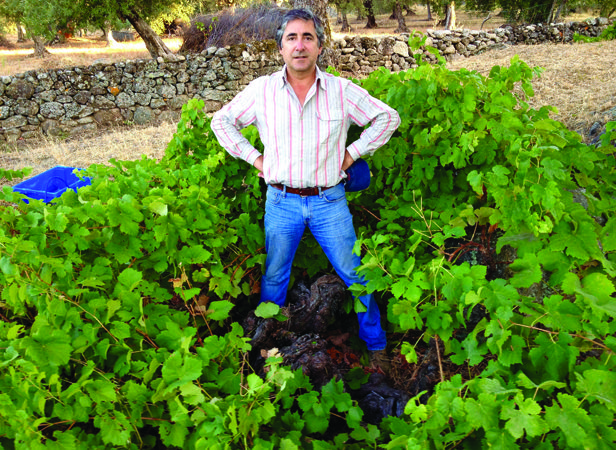 In the early 1990s, a humble cooperative produced one of Alentejo’s highest priced wines. Adega Co-operativa de Portalegre’s multi-award winning red commanded the princely sum of €25. Though the co-operative is no more, Alentejo’s Portalegre sub-region is back in the spotlight, thanks to the savvy bunch of terroir hunters who pounced on its grapes.

What’s more, it looks set to stay there now Port royalty the Symingtons have bought a 43-hectare Portalegre vineyard – their first outside of the Douro.

Plus, pioneering artisans such as Rui Reguinga of Terrenus, João Afonso (Cabeças do Reguengo), Vitor Claro (Dominó), Susana Esteban and the Rosa Santos brothers (Explicit), were attracted by the tiny old field-blend vineyards scattered across Portalegre.

These factors differentiate this northernmost, small (860ha) sub-region – a DOC – from the rest of Alentejo (even the lower reaches of Portalegre district), whose hotter, drier conditions and mechanisation-friendly plains forged its modern era of export-driven smooth, fruity wines.

Take whip-cracker Reguinga’s Terrenus range (founded in 2004), for example; it comes from vineyards between 500 to 830 metres above sea level, the oldest more than a century old.

> Alentejo’s Portalegre sub-region is back in the spotlight, thanks to the savvy bunch of terroir hunters.
> Port royalty the Symingtons have acquired a 43ha Portalegre vineyard – their first outside of the Douro.
> Winemakers are keen to ‘maintain the DNA’ of the vineyards, with ‘obscure’ grapes such as Tamarez, Manteúdo, and Assario being propagated.
> Often, Portalegre grapes have been used in blending, missing a chance to let the terroir shine.
> Wines must be vinified in Portalegre to be labelled Portalegre DOC – which is a bone of contention for Frederico Rosa Santos and Susanna Esteban, whose old-vine whites express the sub-region so well.

Describing them as “sit-up-and-pay attention” wines, importer The Wine Society’s Joanna Locke MW is taken with the analogy between Portalegre and South Africa’s Swartland, whose freewheeling wines are darlings of the indie scene. Like Eben Sadie and Adi Badenhorst, who scooped the old vine Chenin Blanc and Cinsault cream off the top of the Swartland co-operatives’ melting pot, wine writer and former ballet dancer Afonso loves “proving it is possible to make good wine with grapes everybody despises”.

Not for him the “globalised or trendy wines” made from Johnny-come-lately Alentejo varieties such as Touriga Nacional, Syrah and Cabernet Sauvignon – grapes that had crept into Adega Co-operativa de Portalegre reds and feature in wine writer Richard Mayson’s Sonho Lusitano range (“a more international style, but nevertheless distinctive,” says Locke who lists them).

Keen to “maintain the DNA” of the vineyard he acquired in 2009, Afonso is propagating obscure traditional grapes, including Tamarez, Manteúdo, and Assario. Sommelier Ieva Markaityte of London’s Taberna do Mercado started importing Afonso’s “unforgettable organic ‘slow’ wines” this year.

“Earthy, savoury with some big, ripe black fruits,” she rates the reds as “a great traditional Alentejo style”, and his white for “good acidity and firm structure – reminiscent of a warmer-vintage Puligny-Montrachet.”

These are qualities that meant it failed to obtain DOC status because, says Claro, the Alentejo Wine Commission deemed it “too acidic, with a vegetal aroma”. Yet in recent Portalegre verticals, Dominó’s maiden 2010 vintage recalled the red fruits, forest floor and mineral acidity of Tapada do Chaves’ rather Burgundian Tinto Fragoneira 1977.

This once iconic wine was a source of inspiration to Claro and Dirk Niepoort, who, says Esteban, “drove the motor” on her first envelope-pushing collaborative Sidecar label in 2014.

Flirting with the boundaries of ripeness is not the only route to edgier styles with hipster appeal. Sidecar from 2015 (a 50:50 Portalegre/Bairrada red made with Filipa Pato and William Wouters) and 2016 (a Portalegre old-vine white made with Zarate’s Eulogio Pomares from Rías Baixas) was part-fermented and aged in talha (amphora). Reguinga ferments his flagship white in concrete eggs and produced his first talha red in 2015. And it’s not just the artisans who are at it.

Esporão’s talha reds, one from old-vine Portalegre fruit, have cast this big-brand producer from Alentejo’s Reguengos de Monsaraz DOC sub-region in a new light. Observing that “cool-climate grapes in the Alentejo are not that easy to come by”, chief winemaker David Baverstock says Esporão has owned vineyards and bought fruit from Portalegre for several years.

However, save for the talha wine, it has been used as a blending component. Though this is not uncommon, it is something that concerns Explicit’s Frederico Rosa Santos because “using very good Portalegre fruit to enhance wine quality misses the terroir, blending away the sub-region’s potential”.

Another chance to fly the Portalegre flag is lost because wines must be vinified in Portalegre to be labelled Portalegre DOC – a bone of contention for Explicit and Esteban, whose old-vine whites express the sub-region so well.

Though Reguinga agrees “with just a few other grapes you lose Portalegre’s natural character”, he believes newcomers offer “a chance for Portalegre to become better known”. Based in Alentejo but outside the Portalegre DOC, Reynolds Wine Growers’ acclaimed Arinto comes from four vineyards in the sub-region. Confirming that Portalegre’s stock is rising, Julian Reynolds observes: “When I arrived everything was for sale, but now Portalegre is becoming popular.”

Indeed, the Symingtons are not the first producers from another region to invest in Portalegre. In 1998, top sparkling wine producer Caves da Murganheira acquired Tapada do Chaves, and, with an eye for freshness, seems set on restoring its reputation.

But the arrival of the Symingtons is a huge coup, and, according to Mateus, a source of “great satisfaction”. According to Afonso, having “one of the world’s most prestigious wine families as neighbours, quality and the region’s status will rise, as well as the land, wine and grape value.” How things have come full circle.

As Locke observes: “Early on, producers just didn’t realise what they had, and, while other countries and regions were making a noise about their old vines and unique grape varieties and terroirs, Portugal was shy to shout about its own.”

Even Reguinga admits to having initially given away now-precious white grapes to workers “because I tasted individual grapes from field-blend vineyards and could not see their potential”. Thanks to the buzz he and other artisans have since created around Portalegre DOC, there is now little doubt about the quality and sheer force of character of its wines.

Indeed, “convinced that my family’s decision to invest is the right one”, Paul Symington observes, “excellent wines from specific terroirs is what succeeds”.