Quirky cocktail bar Mr Fogg’s in Mayfair has added a ‘space-aged’ Negroni to its cocktail list after sending a bespoke blend to the stars and back. 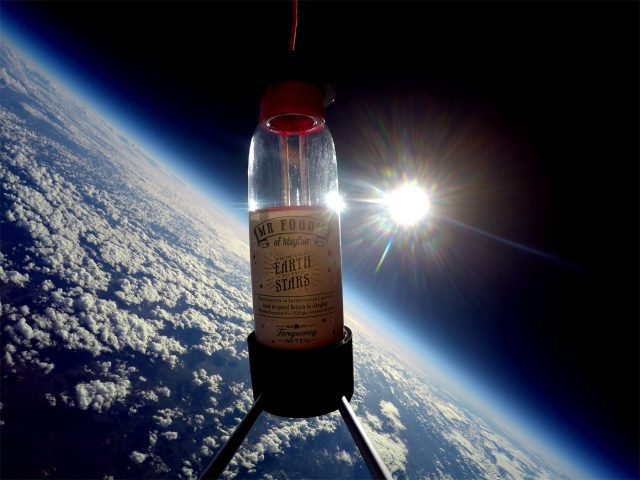 The cosmic cocktail, which was sent 27km above the earth’s surface using a bespoke balloon, will be available for a limited time at the bar. During the Negroni’s two-hour journey into space, temperatures dropped as low as -57 degrees.

Dubbed From The Earth to The Stars, the Negroni is made with Tanqueray Ten gin, Campari, Vermouth, lavender, grapefruit peel, orange peel, lemon peel, chamomile and angelica root.

Anyone who buys the £25 cocktail will receive a certificate that states they’ve sampled a drink that’s been sent to space.

“Space has been at the forefront of everybody’s minds of late with Tim Peake, Sir Richard Branson’s space tourism endeavours and science fiction films like The Arrival.

“Mr Fogg’s ethos has always been based on exploration and we’ve held many talks with everyone from Sir Ranulph Fiennes to Levison Wood – so it was a natural step for us to explore the possibility of a cocktail from space,” said the bar’s co-owner Charlie Gilkes.

“We pride ourselves in thinking outside of the box with our bars and this project has been a particular favourite. We hope everyone will enjoy their cocktail from orbit soon,” he added.

Mr Fogg’s is inspired by Phileas Fogg, the adventurous protagonist of Jules Verne’s Around the World in Eighty Days. Verne wrote two novels between 1865 and 1870, From The Earth to the Moon and Around The Moon about a planned trip to the moon.

This isn’t the first time alcohol has made its way to space. Back in 2011 Scotch brand Ardbeg blasted a vial of un-matured malt whisky with particles of charred oak from the Ardbeg Distillery to the International Space Station as part of an experiment to uncover the differences of space-aged whisky compared to its earth-based counterpart.

In 2015 Japanese producer Suntory sent whisky samples to the International Space Station to study the effect of zero gravity has on ageing.

The same year The Beaufort Bar at The Savoy became the first to send its cocktail menu into space as part of an elaborate stunt to promote its new limited-edition serves.