A 2,400 year-old mosaic featuring a wine-drinking skeleton and the ancient equivalent of a self-help message has been uncovered in Turkey. 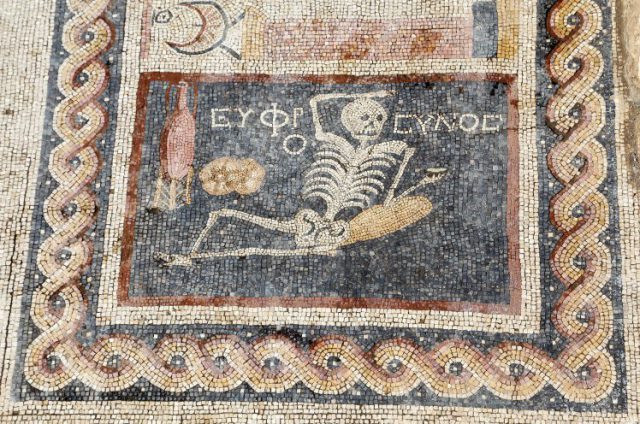 Reclining on a cushion, the skeleton holds a wine cup in one hand while bread and an amphora of wine sit close by. Above it, in Greek, is written the phrase, “be cheerful, enjoy your life”.

The mosaic was found in the Turkish province of Hatay near the Syrian border and was part of a richly-decorated floor of what was most likely a wealthy family’s dining room.

Found in the city of Antakya – ancient Antioch – the ruins in which the mosaic was discovered have been the focus of an excavation by local archaeologists since 2012.

Demet Kara, an archaeologist at the Hatay Archaeology Museum, told Turkish paper Daily Sabah, that it was the first ‘skeleton mosaic’ to be found in Turkey although others have been found in Italy.

The British Museum for example has an example of a skeleton mosaic found in Pompeii, in that instance the skeletal figure was holding two wine jugs. The motif was common in Roman mosaics, frescos and sculptures and was a reminder to ‘carpe diem’ – ‘seize the day’.

Many reports have naturally ascribed the mosaic to Roman owners and it is true that the Roman elite often spoke Greek rather than Latin, in the same way that later European aristocracies favoured French.

As the skeleton relief is common in later Roman art the link seems to make sense. Yet, if the mosaic really does date to the third century BC, it is more likely Greek as the Romans had not arrived in the region – in any great number at least – by this period.

Antioch was a ‘Greek’ city, founded by one of Alexander the Great’s generals, Seleucus I Nictor, in the fourth century BC after the conqueror’s death and subsequent partition of his empire in the 330s.

Large swathes of the Middle East as well as Egypt remained culturally Greek or ‘Hellenic’ under the Seleucid and Ptolemaic empires until the arrival of the Romans in the first century BC.

Although mosaics are best-remembered as an essential part of Roman villa life, many examples have been found in Greek houses that pre-date the golden days of Republican and Imperial Rome.

The Macedonian royal palace at Pella features mosaics from the fourth century BC, so of course the ‘Diadochi’ – Alexander’s successors – would have been well acquainted with the art form.

Evidence of later Roman mosaic makers shows many, and usually the most highly-regarded, were Greeks.