Vicky Lau is one of the most exciting chefs to have emerged on the Hong Kong dining scene in recent years. The former graphic designer was voted Asia’s Best Female Chef at this year’s Asia’s 50 Best Restaurants awards, and with good reason. 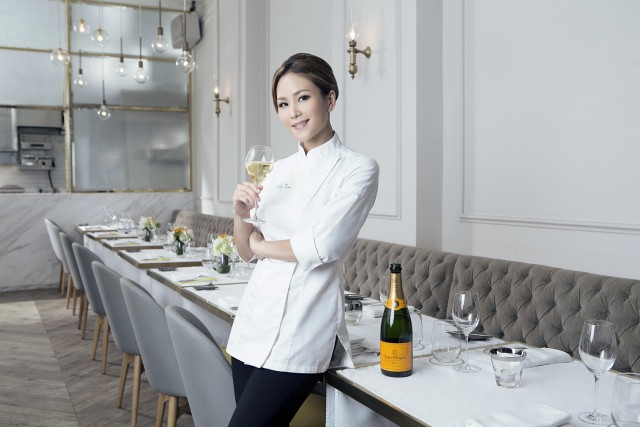 During a recent culinary tour of Hong Kong, I was lucky enough to land a reservation at her 26-seater restaurant, Tate Dining Room in Lan Kwai Fong, bringing along our man in Hong Kong, Rupert Millar, to share the experience with. Having left behind a promising career in graphic design, Lau gained a diploma at Le Cordon Bleu in Bangkok and cut her teeth at the Michelin-starred Cépage in Hong Kong before going it alone with Tate Dining Room in 2012, which won a Michelin star a year after opening.

Lau’s cuisine borrows heavily from the French tradition but incorporates Asian twists. The hallmark of her dishes is her astonishing attention to detail. Each dish is an edible artwork that tells a story. The thought and care that goes into them is phenomenal. Her Ode to Tomatoes for example, is inspired by a Pablo Neruda poem and sees the humble tomato take on five guises: panna cotta, confit, crisp, consommé and gelée, served alongside mustard ice cream.

Informed by her graphic design background, on Lau’s Edible Stories menu, each dish is inspired by a theme, where the ingredients play the role of different characters and the interplay between the flavours, aromas and textures reveals the plot.

The dining room is so cosy and inviting, it feels more like a living room. Floors are polished wood, walls are pristine white and upholstered velvet banquettes a tasteful dove grey, while the seats are pale lemon; the same colour as the waiters’ ties.

Low-hung industrial lights add a touch of grit to the serene and elegant space. A marble partition reveals an open kitchen where Lau is busy at work, looking immaculate in her chef whites.

Dining on a weekday evening, the place has a pleasant buzz on entry. Slipping into a velvet booth to a jazz soundtrack, I picked up the cocktail menu and was immediately drawn to the Yuzu Crush, blending Japanese citrus fruit du jour yuzu with vodka, yoghurt and egg white.

Keen to indulge her artistic side, Lau has sketched each of the cocktails on the list to help indecisive diners like me make a snap decision. Served short with an edible yellow pansy, the cocktail’s fresh citrus notes danced across the palate in one of the most appetite-whetting aperitifs I’ve enjoyed in a long while. We were off to a flying start.

Opting for the eight-course “Sensualist” spring menu, our feast began with a quintet of amuse bouche entitled “Five Elements” presented on a dove grey slate.

Telling the story of earth, air, fire, water and metal, among the highlights was an intense cube of mushroom panna cotta, an exploding coconut sphere and a hunk of cherry blossom smoked eel impaled on a cherry blossom twig. Ludic and packing a flavour punch, they hinted at the games to follow.

Next came a playfully packaged dish in which tuna-like fish bonito played a starring role. Served Portuguese style in a round silver tin, the glistening purple slivers were so meaty and robust in flavour they reminded me of smoky bacon.

Continuing our voyage through the ocean we were then presented with “The Sea”, an impossibly pretty dish involving scallop mousse, crab, yuzu jelly and a sheet of rice paper dotted with edible flowers and dehydrated shrimps.

The mousse was as light and fluffy as a cloud but attacked with an intense, briney taste of the sea. While tiny croutons added crunch, a generous spoon of caviar topped with gold leaf rammed the salty theme home in the most exquisite way, leaving us in no doubt of Lau’s luxury intentions for Tate.

Less to my taste was “Wreath”, which had ox tongue at its heart, served floating in an oxtail consommé with Chinese liquorice root. While the tongue in question was wagyu, the intensity of the flavour was overpowering and seemed out of place on a spring menu, more suited to autumn or winter with its warming meaty broth.

Things got back on track with the pan roasted Ibérico pork pluma served with an unctuous Port and red date purée swirled artfully on the plate. Proving that simple is often best, the pared down dish delighted with the inspired combination of the salty, juicy pork and the rich sweet and sour flavours from the purée. I could have happily devoured two helpings.

While the almost indecently pink pigeon was deliciously flavourful, the rich, fatty thigh in its crispy filo womb was one of the most delightful things I’ve put in my mouth all year, sending me swiftly to food heaven.

Filling up by this point, an intricate pair of puds awaited that showed off Lau’s hawk-like eye for detail. The first riffed on a bee theme with honey ice cream, white chocolate mousse and meringue hexagons mirroring the shape of honeycomb in a vividly sweet ensemble.

The final flourish were the petit fours, including passion fruit marshmallows and jasmine macaroons, which came dotted in a Zen garden filled with edible grey sand.

While the food remained the focal point of the evening, a number of the wine pairings shone, including a zippy 2012 Weingut Knoll Federspiel Riesling from Wachau, whose linear, mineral character married well to “The Sea” dish, while a 2010 Valdicava Rosso di Montalcino’s notes of raspberry, red currants and sour cherry paired seamlessly with the Ibérico pork.

Hong Kong has a bright star in Vicky Lau and I’m excited to see what she does next. While some of the dishes were a touch overwrought and finicky, and others appeared anachronistic on the spring menu, there was very little not to like about my evening at Tate Dining Room.

While casual dining continues its march across the city, it’s heartening to know there are still venues keen to give guests a fine dining experience, but one where the emphasis is firmly on fun.