Bacardi has moved to “redefine” super-premium gin with the launch of Star of Bombay, an elevated expression of its Bombay Sapphire brand. 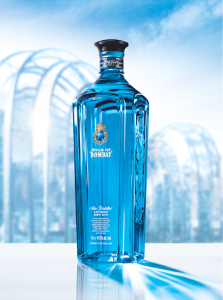 Arriving in global travel retail outlets from later this month, Star of Bombay features two additional botanicals – Bergamot orange peel from Calabria in southern Italy and Ambrette seed from Ecuador – on top of the 10 that feature in the core Bombay Sapphire expression.

This new offering is produced at Bombay Sapphire’s recently opened facility at Laverstoke Mill in Hampshire, where master distiller Nikolas Fordham used a vapour infusion process to create a gin with “a richer aroma and more intense flavour”.

The higher 47.5% abv is designed to emphasise the aromatic profile and “underpin the spirit’s overall balance and harmony,” according to the brand, which noted that the slow distillation method ensures “exceptional smoothness” despite the step up in alcohol.

Introducing the new gin, Bombay’s master of botanicals Ivano Tonutti explained: “The idea with Star of Bombay was to create a gin with an increased perception of the Bombay top-note aromatics.”

In order to achieve the desired stylistic result, he noted: “Painstaking flavour trials had to be made to achieve the precise quantities and qualities that could interact with all the other botanicals and integrate into the heart of the gin.”

Mike Birch, managing director for Bacardi Global Travel Retail, highlighted the commercial scope for this range addition. “Gin is one of the ‘hottest’ categories in travel retail, however there is a large opportunity to further premiumise it,” he remarked. “With Bombay Sapphire as category leader, we can unlock this potential with a super premium gin like Star of Bombay.”

Star of Bombay is packaged in a taller, slimmer bottle than Bombay Sapphire and will launch initially at Sydney airport ahead of its global roll out with an RRP of AUD$66 (£35).

Its arrival comes as WSTA data shows that sales of British distilled gin have seen 18% growth over the last two years, with a 50% rise in the number of premium quality offerings during the same period.

With around 28% of gin consumed worldwide originating in the UK, some corners of the drinks industry have suggested that the category could enjoy the same rise in fortunes as the Scotch whisky sector.