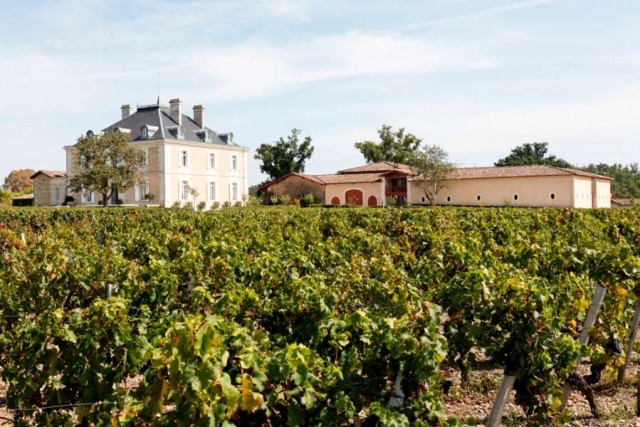 It was noted earlier this month that Liv-ex’s “Bordeaux 500” index – which monitors the last 10 physical vintages of the 50 leading Bordeaux estates – was “moving in the right direction”. The top 20 performers on the index, largely 2005s and a smattering on ‘09s, ‘03s and ‘02s, had risen over 15% each since last July when the market began to turn following a 17 month downer.

Liv-ex has now looked at the best performing châteaux on the index regardless of vintage. Of the 50 estates, 37 have risen since July 2014, 13 rising at least 4%.

Four of the top five have recently had wines upgraded by Robert Parker (Haut Bailly, Montrose, Mouton Rothschild and Angélus), Haut Bailly’s 2009, Montrose’s 2010 and Mouton’s 2005 being the most notable examples.

And despite Mouton scooping the most headlines it is Haut Bailly which has been the most consistent performer so far this year on both its sub-index, the Left Bank 200, and the wider Bordeaux 500 index.

It is also striking that, with the possible exceptions of Angélus and more recent vintages of Palmer, all of the best performing wines represent or are seen to represent the holy trinity of good quality, good scores and “reasonable” prices.

Interestingly though, the resurgence of the Left Bank has come at the expense of the Right Bank. Throughout 2013 (and the tail end of 2012) the communes of St Emilion and Pomerol seemed immune to the slide of the Left Bank estates, rising 64% in five years and boosted largely by Pavie, Angélus (just upgraded to grand cru classé A) and l’Eglise Clinet.

In February 2014 however Liv-ex noted a disturbance in the force as the Right Bank 100 index dipped 4.1% after 13 months of non-stop rises.

Although 37 of the 50 labels on the 500 index have risen since last summer, 13 have declined and six of those are from the Right Bank.

Looking at the chart below it’s clear that the Right Bank 100 recovered from its early “wobble” in 2014 and hit a high patch between August and September before declining again. 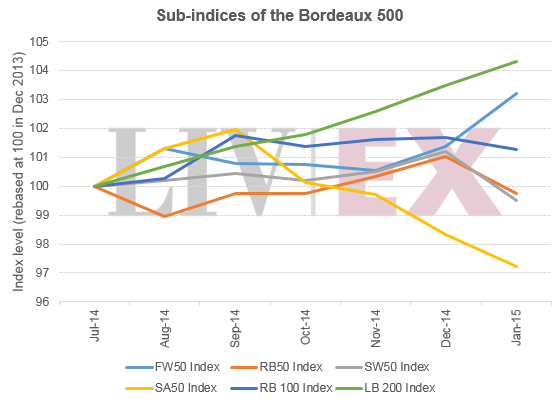 Since late November it has been on a downward course while its sister sub-index, the Right Bank Super 50 (Pétrus, Le Pin, Ausone, Cheval Blanc and Lafleur) has dropped off quite suddenly after a strong rise in late 2014.

By way of contrast, look at the upward trajectories of the Left Bank 200 and Fine Wine (first growth) 50, the former going on a herculean drive since last July and the latter hitting its stride from December onwards.

All in all it can now be more confidently said that Bordeaux – at least the Left Bank – is once again “making headway”. How long can it last?