Molson Coors UK is to invest a further £28m in its Burton Brewery taking its total to £75m and making it one of the biggest single capital investments in British brewing for decades. 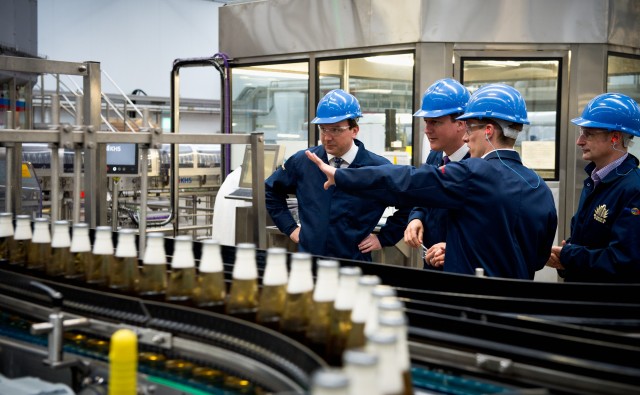 The additional capital will be invested in brewing technology and infrastructure as part of the brewery’s five year redevelopment plan to support the production of 1.2 billion pints of beer, including brands such as Carling, Coors Light and Cobra.

The announcement coincided with a visit to the brewery by Prime Minister David Cameron to view the brewery’s recently completed £21m bottling line.

Prime Minister David Cameron said: “Giving businesses the confidence to invest is a key part of our long term economic plan. Molson Coors’ commitment to spend £28 million on this innovative brewing technology demonstrates that this plan is working – encouraging business investment and giving hard-working people economic security for the future.”

A new energy centre will be built as part of the redevelopment plans, helping the brewer to achieve its target of reducing energy use by 25% and cut greenhouse gases by 20% by 2020.

Simon Cox, managing director of Molson Coors UK and Ireland said: “We are excited to be investing further in Burton Brewery and its workforce as we continue our redevelopment programme.

“Funded by the biggest investment in our industry for decades, the new infrastructure and technology at the brewery will maintain our rich heritage of brewing in Burton.”