BrewDog hits out at mainstream beers 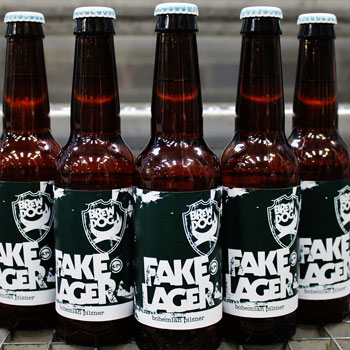 Fake Lager is a Bohemian Pilsner designed to be “everything that mainstream, mass-produced lagers are not.”

With a confrontational name and positioning, BrewDog said it hopes “Fake Lager will chip away at the stereotypes associated with the beer style” that it feels “epitomises binge drink Britain.”

James Watt, co-founder at BrewDog said: “Fake Lager will restore the muddied and bastardised pilsner style to its rightful position as a beer with complexity and character; not the shameful mass produced monstrosity that has become the stereotype in the UK.

“Fake Lager is a statement of intent and the next step of the craft beer revolution. The gates have been breached; the big guns can smell the change is coming and they’re running scared.”

Fake Lager craft pilsner will be available to buy from BrewDog.com and in any of the eleven BrewDog bars throughout the UK from this Saturday.

The Scottish craft brewer, who gained fame for its efforts in brewing the world’s strongest beer, also plans to host a nationwide crap beer amnesty. On April 6 beer fans can trade-in a can, bottle or even a keg of their “lowest common denominator beer” for a half pint of Fake Lager at any BrewDog bar.

BrewDog caused short-term outcry amongst fans when it announced Fake Lager on April Fool’s Day claiming it was a “sell out” beer, and the brewery was going “mainstream”.

Among the reported ingredients and processes in the April Fool’s Day prank were “Rice, Corn & Glucose Syrups”, “No hops at all”, “almost no flavour at all, hints of cardboard, snake oil and corroding metals” and “quadruple filtered and pasteurised to the point it no longer has a discernable soul”.

This is not BrewDog’s first attempt to tackle binge-drinking culture. Last year the creative brewer tried to “kill beer stereotypes” by launching Ghost Deer, the world’s strongest fermented beer in a 6cl bottle.

BrewDog said it was “a physical demonstration that beer can be more than a pint of fizzy, apathetic, yellow lager”.