The CIVB has said that no smoke taint has been detected in grapes analysed in Bordeaux, despite the series of wildfires that have ravaged forests in the region in recent weeks. 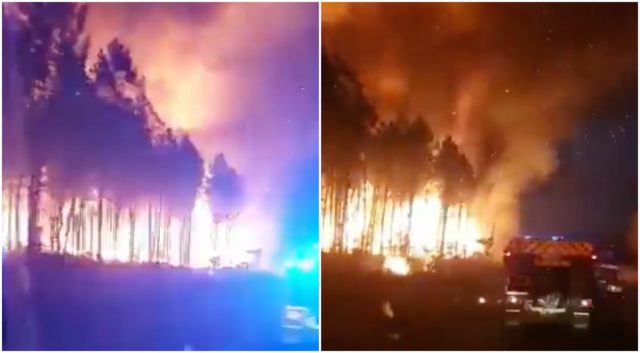 In a statement to the drinks business, a spokesman for CIVB said that the fire had not been in close proximity to the vineyards and the winds had pushed the smoke to other, non-vineyard areas, which helped protect the ripening berries.

The ripening was also still at an early stage when the first fires broke out, she said, meaning the skin of the berries was thick enough to be resistant to any smoke.

“Berries have been analysed and nothing has been detected,” she said, adding that “the rains of last week and this week have allowed to rinse any possible traces.”

She added that as soon as the first fires broke out in July, the CIVB has been contacted by vineyards of Australia and California who shared their expertise.

“This is a large-scale project lasting several years,” she said. “The forest is an integral part of the local terroir, it is the lung of the region, a natural reserve (animals, insects), of which nearly 30,000 hectares have burned. It is above all a great sadness for the inhabitants.”

The CIVB said the technical commission of the CIVB as well as all Bordeaux producers were “deeply involved and engaged” in looking at ways to mitigate the dangers.

“[We] have [all] been working for many years on the adaptation of the vineyard to climate change,” she said, pointing to a series of  initiatives launched in Bordeaux over the last few decades. “Looking forward is important. That’s why these initiatives are already widespread across all the Bordeaux vineyard such as new varieties and agroforestry.”

“We need to anticipate and invest in research.”

The fires have been a recurrent problem across the Gironde this summer as a result of drought like conditions leaving the forest like a tinder box.

Two fires broke out on July 12 in La Teste-de-Buch, south of Arcachon (a considerable distance from any Bordeaux vineyard) and at Landiras in the Graves region, close to Sauternes, Barsac and Cérons. These raged for two weeks, and causied the evacuation of Loïc Pasquet’s Liber Pater  and the storage facility of Bordeaux négociant, Les Grand Chais de France. A third, smaller, fire broke that out in the Northern Médoc at Vensac a few days later (18 July) more brought under control more rapidly.

According to local reports, the authorities believe the fire in Landiras may have been started deliberately, although a man who was arrested on suspicion of arson was later released without charge and ruled out of the investigation.

Sadly, the fire reignited in two areas on 9 August in forests around Cabanac-et-Villagrains  and Hostens last week, close to near Landiras, although these have now been brought under control.

As our Bordeaux correspondent Colin Hay noted earlier this month, smoke taint has gone from an appreciable but largely hypothetical risk in Bordeaux to a “palpable and urgent fear”, as climate change looks set to increase the likelihood of hot dry summers that elevate the risk of forest fires in late summer and early autumn (August-October).

He spoke to a number of producers and consultant oenologists (including those with experience of the fires that have ravaged Napa Valley in the summer of 2020), as well as looking at recent academic research on the subject, to consider the five important factors at play – climate change; topography; the wider environmental damage caused by forest fires; the susceptibility of grapes to smoke taint at different stages in their development; and the geography and meteorology of the region.