Phillip Schofield: ‘I want to take over the world in cardboard’

ITV presenter Phillip Schofield is set to release his bag-in-box wine range in cardboard bottles, he announced at the London Wine Fair on Wednesday. db caught up with him about the new launch and why Schofield wines is “not just another celebrity wine brand”.

“I can remember sunbathing on the roof of our shed when I was 15,” the This Morning host began, recalling that it was at this time, hearing about French wine regions on the radio, that “tweaked [his] interest” in the world of wine.

Phillip Schofield now has his own range of Italian wines with bag-in-box brand When in Rome. Launched in early 2020, Schofield Wines now comprise of a red, made with Nero de Troia, a white made with Falanghina, and a pale pink rosato made at the Viticultori d’Italia cooperative in Soave.

The ITV presenter got involved with When in Rome after learning about the brand at a Waitrose blind tasting. He is now part of the tasting team, having been involved in selecting the wines from the get go.

“I wouldn’t have just put my name on any wine,” he said. 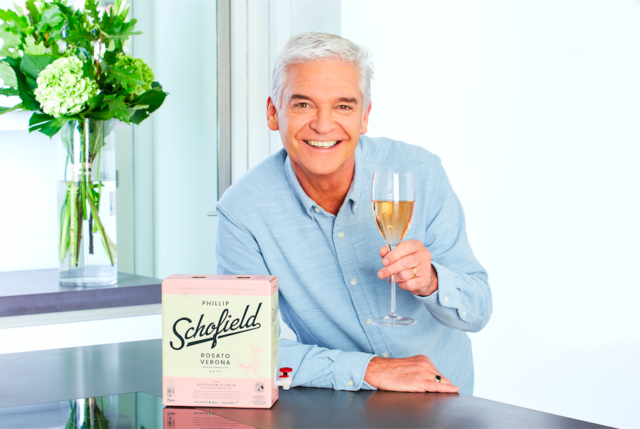 Cardboard bottles are the latest innovation. Designed and created by packaging company Frugalpac, they comprise an external layer of 94% recycled paper, with a PET plastic inner.

The paper bottles are similar in material to the original bag-in-box packaging in which Schofield launched his range, but with one key difference – the look.

“Other than looking great on the table, we know that we are doing our bit,” Schofield said.

Boxed wine makes up around 3% of the packaging for wines in the UK. When in Rome CEO Rob Malin noted that the brand is “predicated on minimising the use of glass”.

And Schofield is passionate about this message. He told db on Wednesday: “I’m not naive. I don’t think you can change the world with one good idea.”

But noted that in the face of climate change, “maybe one day we’ll have to”.

The Frugalpac paper bottle has been used by others, namely Cantina Goccia, but When in Rome claims to be the first wine in a Frugal Bottle to have a major UK retail listing with Ocado.

When asked if Schofield has any future plans to bring out a more extensive range of wines in both bag-in-box and paper bottle formats, he told db: “I want to take over the world in cardboard.”