Iona Winery is known for having the coolest vineyards in the Cape of South Africa, sitting 420m above sea level, high above the picturesque Elgin Valley. This year they celebrate their 21 st vintage and db caught up with owner and founder, Andrew Gunn to learn more about the history and the future of this renowned South African producer. 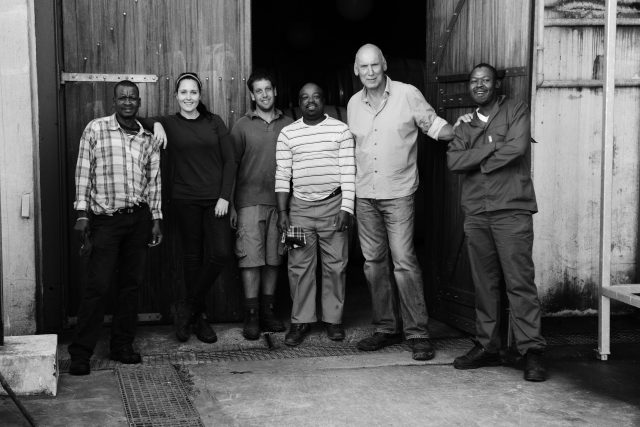 Andrew, can you tell us where it all began. How did you get here and how did Iona come to life?

Well, 2022 is the 25 th anniversary of my purchasing the farm Geelbeksvlei which I changed to Iona as a nod to my Scottish and Viking ancestry, and the 2021 vintage marks the 21 st of our first wine: the Iona Sauvignon Blanc 2001. In 1996, I was inspired by Nelson Mandela’s vision of the new South Africa, where all would work together to make the country great. I decided to invest in something that I could do for the rest of my life. I’d always loved the idea of being a farmer and saw a Lime farm for sale in Franschhoek, which started my investigation.

I visited Franschhoek on a hot February day, close to 40 degrees, this coupled with the fact that my vision of a farm is where you can’t see your neighbours, I decided to look elsewhere.

The Elgin Valley was the last area I visited after looking at 20-odd farms around the Cape. Driving down the N2 road from Cape Town one has no idea as to the extent of the Elgin Valley on the right-hand side of the N2 which stretches fifteen kilometres to the Atlantic Ocean in the south and is quite beautiful.

When I visited in March, the trees were laden with apples and pears, such bounty I had never seen, and I was convinced I could make a living farming fruit. The estate agent, finally showed what I thought was a viable apple farm, called Geelbeksvlei, surrounded by state forestry and the Kogelberg Biosphere, overlooking the Atlantic Ocean in the south and the Elgin Valley in the north with the nearest neighbour 6 km away. It was love at first sight. I made an offer, more than I should have, and moved down to the farm with my then partner Rosa Kruger.

Since purchasing the farm, what has been your biggest challenge to date?

Apparently amongst the most stressful things you can do in your life, is get divorced, start a new relationship, change jobs and move, I did all four in a year! On top of that, when I purchased the farm little did I know the industry was approaching a severe downturn, interest rates were 24%, the market deregulated and British supermarkets as a result were putting unrealistic quality pressure to bear on sellers and farmers alike. The farm was planted to the wrong varieties and the trees were old. I faced the prospect of losing everything I had worked for.

Being an engineer, I have always taken a pragmatic and analytical approach to business problems. I had been reading Jancis Robinson’s Oxford Companion to Wine which maintained that great wines are made in “cool to intermediate climatic conditions” and wondered whether the farm was suitable for wine grapes. I put temperature loggers on the farm and over a three-month period compared the hourly temperatures with a weather station in Grabouw to find that we were consistently lower. I extrapolated this information to create what I thought would be the long-term climatic conditions on the farm.

With the assistance of my uncle, a Professor of Geomorphology from England compared this to the great wine growing regions of the world. We concluded that our climate was somewhere between Burgundy and Sancerre in France where great Chardonnay; Pinot Noir and Sauvignon Blanc are grown.

I visited Professor Eben Archer, head of viticulture at Stellenbosch University, whose first reaction was “sorry to disappoint you but South Africa is a warm to hot wine growing region”. After going through my rationale, he became very excited and offered to become our viticultural consultant.

We planted our first vineyard in 1997 and for the next 4 years Eben was involved in planning, executing our plantings, and training our staff, who up until that stage had only been involved in apples.

The land and climate aside what has helped make Iona a success?

My father was a product of the Great Depression in the 1930’s, with a PhD in chemistry, he applied for 400 jobs and the only job he was offered was in South Africa with the Cullinan family in Olifantsfontein which resulted in me being born here in 1949 just as the Nat’s came into power. I am very conscious of the privileges I enjoyed during these times and how they have contributed to where I am now.

This invites introspection and acknowledgement of some people who have contributed along the way to the success of Iona in so many ways, which on a personal level has been my sole endeavour for the last 25 years and continues to be.

The business consumed much more cash than I anticipated and for some time operated at the limit of my overdraft. I solicited prospective partners and investors to no avail, at one stage I was prepared to sell 50% of the farm for 2million Rand but there were no takers – Thank you to all of you!

During my research into the wine business, I visited the late Ross Gower at Klein Constantia to discuss cool climate wine making. He became intrigued with Elgin and as a result bought a farm on auction. I attended the auction where I met Gyles Webb who at the time was involved with GT Ferreira at Tokara, he offered to make our wines at Tokara for 3 years and as a result I sold 35 ha to GT which provided me with the capital to build a cellar and fund the development of the business.

Meeting and marrying Rozy my highly intelligent, evolved, energetic and committed wife, brought up on a sheep farm in the Karoo who studied for a master’s degree in fine arts at Cape Town University brought another dimension to my life. She has a real affinity and connection to nature, this is expressed in all she does, from being a mother, wife, partner, and farmer. She gave up a promising career as a sculptor to devote herself to our endeavour. She continues to give me a balanced view and perspective of what is important in life. The way she approaches her farming endeavour for our Solace and One-Man-Band wines from her Brocha property provides for a rigorous exchange of ideas, practices, and enthusiastic banter across the whole team.

So what does the future hold?

I am very conscious of my mortality and my father always said three score years and ten is a good innings, but I do still have the energy and desire to continue being the custodian of this special property whilst I can.

The wine business is all consuming, dynamic, and alluring, you can never say you’re on top of it. I do however believe that as our vineyards get older and we learn more about them, we tread more lightly with integrity and respect the environment, the best is yet to come.

We have a wonderful young team in the vineyards, cellar, sales, and administration, all highly committed and competent and it’s unlikely that I’ll be around to celebrate the 50th anniversary, but I suspect Rozy might.

What does ‘sustainability’ mean to you?

The extended Iona family includes the 20 workers who all live on the farm, our wonderful winemaking, farming, office and sales teams. Without their dedicated work we wouldn’t be where we are today. From the beginning, 25 years ago, I knew I was taking on a huge responsibility, not only of the land but also the people who work on it.

Most farmers secure their workers from surrounding villages and townships, however due to land tenure rights in South Africa, whereby anyone living on a farm for more than 10 years are entitled to permanent residence, we have a collection of 20 homes on the farm which house all our permanent workers and their families. It is a significant responsibility in that the farm acts as a small closely knit community, all interdependent on each other for social harmony and happiness. We provide additional support by way of infrastructure and maintenance, water, sewage, electricity and transport as we’re 20km for the nearest town. Our workers get 15 days paid holiday, a heavily subsidised retirement plan, annual bonuses and are paid almost double the minimum wage. On retirement our staff can return to their ancestral homes where many use the income to build homes for themselves and their families. Should any worker choose to continue living on the farm they can. Education is vital, so their children have the opportunity to attend either the local private school or the
nearest government schools.

When I purchased the farm in 1997 I introduced a worker equity scheme where the workers acquired a share-holding in the farm which they had the right to sell back on retirement or resignation, giving them some ownership and commitment to the success and capital growth of the business.

At Iona, staff turnover is almost non-existent and most workers have in excess of 15 years’ service with quite a number in excess of 25 years. Thys Windvogel, who retired recently at the age of 70 had been working on the farm for 35 years and has chosen to continue living here with his children and grandchildren, who also work for us.

Iona focus on three varieties namely Sauvignon Blanc, Chardonnay and Pinot Noir, all ideally suited to the cool growing conditions. These are inimitable wines from the Cape of South Africa, that have been praised by many including Jancis Robinson who was recently reacquainted with Andrew’s first vintage saying, ‘Iona Sauvignon 2001, a 21-year-old wine that was still very much alive and kicking.’ Exported throughout the world, Iona is distributed in the UK by Alliance Wine.