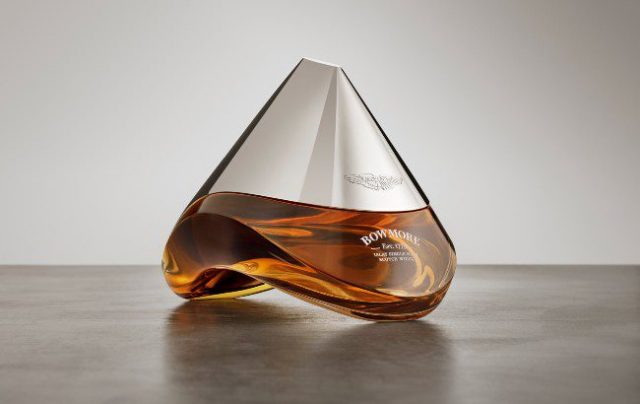 The new collaboration sees one of Bowmore’s oldest whiskies, an exceptionally rare release of 52-year-old single malt from the iconic distillery, released in a sleek, futuristic and sculptural decanter designed by Aston Martin, which the two companies describe as “the pinnacle of their partnership”.

Only 100 hand-blown decanters are being created, each numbered with a certificate of authentication, and these will be released on a staggered basis. 50 bottles will be available to purchase later in this summer, with the remaining 50 being released in early 2023. The ARC-52 will be available in key global markets including UK, Germany, Netherlands, USA, Canada, China, Singapore, and Global Travel Retail at an RSP of US$75,000 (excluding VAT/duty).

The whisky itself is “a marriage of two cask styles”, the company said, combining 50% an American Oak Hogshead and 50% European Oak Butt matured whiskies, giving “herbal and medicinal notes combined with exotic fruits, praline and butterscotch to finish”.

“This single malt promises unquestionable complexity but is perfectly balanced by bringing together these individual styles in equal parts,” it noted.

Ron Welsh, Bowmore’s master blender, said: “A Bowmore as exquisite and complex as this 52-year-old is testament to the skills of our distillery team and their commitment to optimising the time spent in cask to create such an incredible spirit.”

“Working with Aston Martin remains hugely rewarding and fascinating for me. It continues to inspire and show us a different way of working, with absolute precision, and has allowed us to create what, in my opinion, is the best Bowmore over 50 years old that I’ve ever tasted.”

The innovative scultpural design of the decanter was engineered by the team at Aston Martin, using the latest 3D printing as well as traditional hand crafted clay modelling and hand-blown glass to combine natural and man-made, modern and traditional elements so that the vessel balances on two points, “almost weightlessly”. It comes in a presentation box that is opened using a bespoke magnetic key.

“It is this concept of balance which defines every aspect of this sculpted design,” the team said, noting that it took “the very same approach to achieving balance and optimal form when designing an Aston Martin”.

Marek Reichman, chief creative officer at Aston Martin, said the ARC–52 sat “at the apex” of the partnership and showed “the depth of what we can create collaboratively”.

“We set out to produce something which hasn’t been seen before, capturing our uncompromised design principles and also the magnificence of the whisky,” he said. “I believe that what we have created is truly a piece of sculpture. Taking balance as the most important factor, as we do in designing Aston Martin cars, we’ve harnessed heritage and innovation in perfect balance.”

“For me there is just so much to discover with this whisky as it embodies so much hidden knowledge, even the colour looks like it’s been created by time,” he said.