The secondary fine wine market appears to be “immune” from the economic turmoil facing the global market after a strong first quarter of 2022 Liv-ex has said – at least for now. 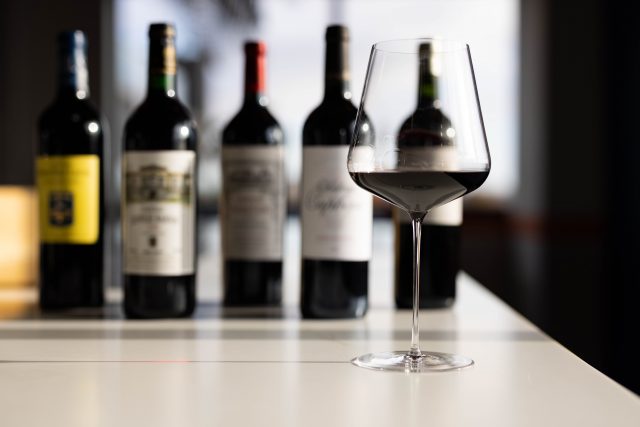 The latest quarterly report from the fine wine platform shows that “2022 has picked up where 2021 left off”, boosted by a good campaign for the 2020 Burgundy vintage. It follows a very strong performance on the secondary fine wine market last year, which saw an unbroken 18-month run of gains in both the Liv-ex Fine Wine 100 and Fine Wine 1000.

There were particularly robust gains showing for Burgundy and Champagne in the Liv-ex 1000 (which is the broadest measure of the secondary market), it noted, which the sub-indices for those regions up 14.6% and 9.6% respectively.

Although the Burgundy 150 – which tracks the price movements of the most active Burgundy wines (mostly grands crus) in the secondary market – performed the strongest over the last three months, the Champagne 50 outperformed it during the last year, rising 52.2% in 2021 or 70% over the past two years. This compares to  Burgundy 150’s rises of 43% and 55.1% over the same time periods.

The index for the rest of the world has also risen, up 6.8% in the last three months, or 30.2% over the past year, driven by strong trade and price performances of US wines, especially Napa’s Screaming Eagle. This drove the sub-category by 7% during the first three months of the year, it said.

Another star performer among the Liv-ex 1000’s component wines over the last three months was Domaine Leflaive 2012, from the Puligny-Montrachet based wine estate in the Côte de Beaune, which has risen in price by 76% in just 3 months. This highlights the strength of Burgundy, with nine of the top ten performing wines, being Burgundian, – the exception was a Domaine Jean Louis Chave from the Northern Rhône. 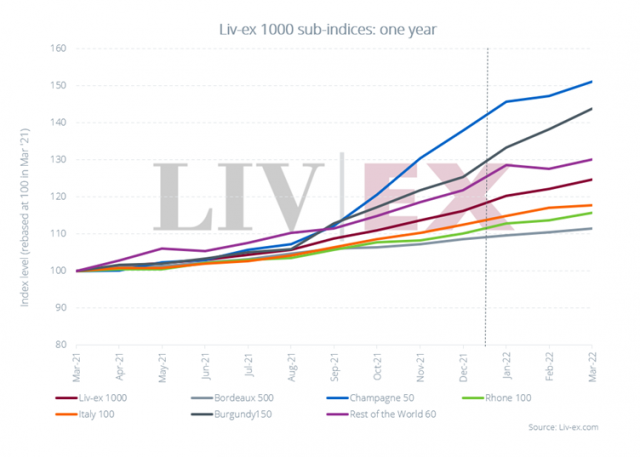 The report come despite economic challenges associated with Russia’s invasion of Ukraine, with rising inflation and interest rates, soaring prices in crude oil and other commodities and the rising cost of living.

However, the report argued that fine wine continues to outperform equity markets while lagging behind surging commodities.

“As an alternative asset it retains certain advantages over mainstream financials in difficult times, especially as it is both a diminishing asset and one where time invested in holding on to stock is often necessary and generally encouraged. Thus, its volatility is extremely low,” the report said.

For example, the Liv-ex Fine Wine 50  has remained stable over the past quarter, outperforming major equity markets such as the FTSE100 and Dow Jones, it pointed out.

There is, it notes growing demand from the US, while Sterling has continued to see volatility against many of the world’s major currencies, notably losing ground to the US dollar.  This is partly due to the US’s distance from the war in Ukraine, both geographically and economically, but it has helped countries such as Singapore and Hong Kong, whose currencies are linked, especially as the Yen has weakened, cooling demand.