Five of the most expensive bottles of wine in the world

With fine wine value surging as a luxury investment, wine is certainly more than holding its own when it comes to sky high prices. As such, here are some of the most expensive bottles of wine in the world, and how much they sold for.

In November 2021, a six-litre bottle of The Setting Wines 2019 Glass Slipper Vineyard Cabernet Sauvignon became the most expensive wine ever sold at auction, going for an eye-watering US$1 million.

Grapes for the wine were sourced from Napa’s Coombsville area, where the Glass Slipper Vineyard resides. While the sole six litre bottling of the Cabernet Sauvignon sold for US$1 million, at charity auction, a 750ml bottle will go for a more humble $185. However, only 900 bottles of the 2019 vintage were ever produced, suggesting it may be hard to get your hands on.

An Asian collector paid the princely sum of US$558,000 at auction in New York City for this 1945 Domaine de la Romanée-Conti, Romanée-Conti Grand Cru in 2018. In the process, several records were set, including the highest price paid for a standard size bottle of Burgundy, and – at the time – the most expensive bottle of wine in the world. Only 600 bottles of the challenging 1945 vintage were produced.

Only 500 cases of Screaming Eagle are produced each year, making them highly sought after and rare. They have ideal ageing properties.

The famous Bordeaux vineyard is certainly synonymous with quality, but it also lays claim to having one of the most expensive bottles of wine ever sold to its name. This Bordeaux Blend red wine consistently goes for a pretty penny, particularly the rare 1945 vintage, but in 1997 someone paid a whopping $310,700 for a jeroboam.

Often characterised as the greatest wine of the 20th century, the 1947 Château Cheval Blanc is something of an outlier when it comes to fine Bordeaux. A spectacular wine from St-Emilion, the 1947 vintage is always sure to command a high purchase price, but at a Christie’s auction in 2010, a bidder paid $304,375 for a bottle.

The wine is 50% Cabernet Franc, 50% Merlot and hails from an extremely hot vintage that delivered grapes high in sugar. The resulting wine is high in alcohol, particularly compared to others of the same era, at 14.4% ABV. It’s a true one-off, something Cheval Blanc’s current director, Pierre Lurton, described as “an accident of nature”. 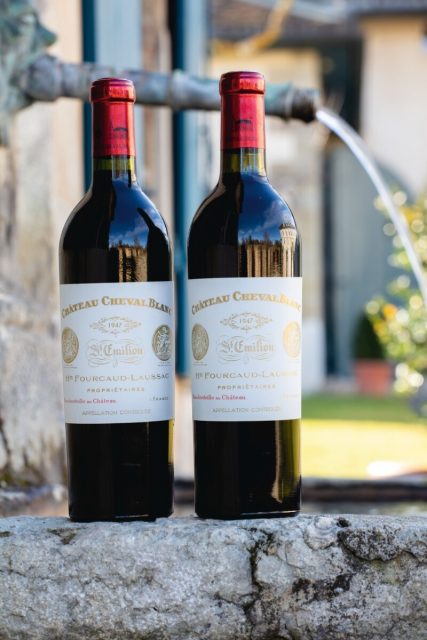 With fine wine soaring in the most recent Knight Frank Luxury Investment Index, it probably won’t be all that long until a new bottle breaks the record to become the most expensive bottle of wine in the world.