A popular TikTok user has sparked a debate after claiming that Costco’s in-house spirits are basically the same as higher-end brands like Jim Beam and Grey Goose. 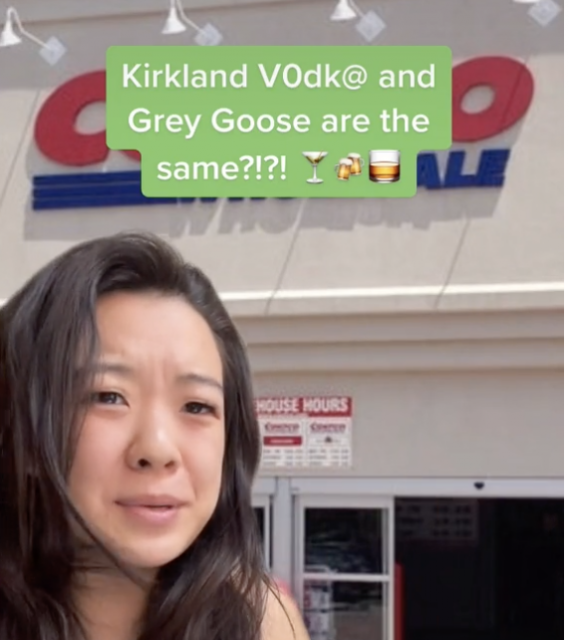 Her username on TikTok is @yourrichbff, and she uploaded a video last month, in which she claimed that purchasing from Costco does not mean that one is not able to afford other brands, but instead it is about getting the most out of “the product”.

The video is structured as almost an acting role-play with herself, where she says to “grab a handle of Kirkland vodka“. Her “friend” noted that the pair are not students anymore (meaning they have a stable salary) and therefore “can afford the Grey Goose”.

Viv responded: “It’s not about ‘affording’, It’s about the product. You do know that Costco’s Kirkland booze is all made by famous distilleries, right?”

To back up this statement, Viv continued to state that Costco’s Kirkland brand vodka is made by Grey Goose, before claiming that Kirkland bourbon and rum are produced by Jim Beam and Kentucky. “I’m never going to overpay for a label again,” she concluded.

The video in itself has been viewed more than 3.6 million times, and it really sparked a debate. Some were questioning the reliability of the TikToker’s claims, while others suggested that – even if produced by the same distilleries – the Costco brand spirits are not the same as the high-end ones.

Some users also pointed out that Grey Goose itself has previously denied the claim. In fact, the company told USA Today in 2020: “No, Grey Goose Vodka does not produce nor privately label Kirkland vodka … This is a viral claim that has circled Grey Goose for many years and it’s completely false.”

Furthermore, the distillation process is different too, as Grey Goose stated: it distills its product only once “in an effort to preserve the quality natural ingredients and profiles of its ingredients”, while Kirkland’s vodka states that it is distilled five times, according to USA Today.

On the other hand, Vice previously noted that both vodkas use water from the Gensac Springs region of France.

Another outlet clarified the claim regarding Costco’s bourbon: Forbes. “Costco’s original bourbon bottlings were sourced from Jim Beam and then George Dickel,” Forbes stated. However, Costco now sources its spirit from from Barton 1792, a Sazerac-owned company.

Viewers of Viv’s TikTok also noted in the comments that just because Kirkland may have used the same distilleries as higher-end brands before, it does not mean that the product recipe is the same. One viewer wrote: “NO IT’S NOT!!!!! It is made in the same place, that doesn’t mean the SAME INGREDIENTS OR METHODS.”

Someone else compared it to other drinks: “Coca-Cola makes Coke and Sprite. Doesn’t make them the same.”

While speaking to The Independent, Viv said: “To me, it feels that even if the products aren’t identical, they’re nearly identical enough that folks don’t need to be overpaying for marketing. The products are made in the same Cognac region and white labelled for Costco’s use.” She then continued: “At the end of the day, alcohol is one of the most marked up items – in terms of ‘designer brands’ – so I highly recommend Costco/generic versions. For a smoother taste, you could even run cheaper vodka through a Brita filter!”