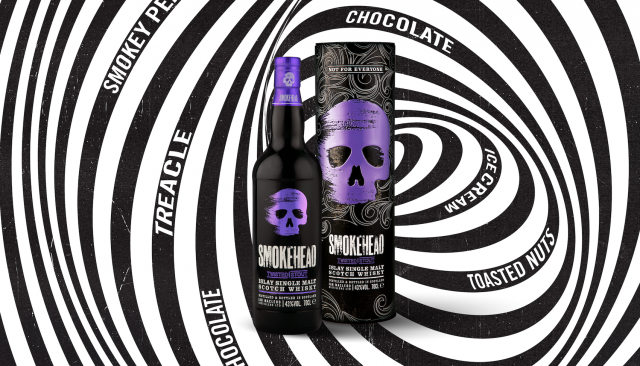 The new 43%-ABV Islay single malt Scotch has been part-finished in stout casks to give it a “notes of rich chocolate and treacle toffee, vanilla ice cream, roasted nuts, and toasted biscuits,” in addition to the brand’s flagship peated smoke flavour.

In a move that the company has called “convention challenging,” “trailblazing” and “rule breaking” the new expression traverses categories by offering notes of both beer and whisky in one drink and is targeted at people who are looking for new and exciting flavours rather than category loyalty.

Iain Weir, Smokehead brand director said: “We’ve clearly struck a chord with those who do things their way, live life on their own bold terms, and pick a whisky that’s as disinterested in the status quo as they are. Twisted Stout is as far away from a standard single malt as the combination of tastes, aromas and flavours inside the bottle.”

Weir added: “While all our releases come with an original twist, our latest might just be our most twisted yet. Which is just how we like things.”

The distiller’s tasting notes describe the new expression as “maritime air meets a decent pint on the shore” making the new launch “the twisted lovechild of whisky and beer”.

Smokehead Twisted Stout will be available to buy exclusively from www.smokehead.com and will retail at £49.99 per 70cl bottle.