With al fresco drinking and dining returning today (Monday 12 April), here’s our round up of the best outdoor dining spots in the UK capital, from timeless classics like The Ritz, to relative newcomers like Stanley’s in Chelsea.

The Garden at The Berkeley 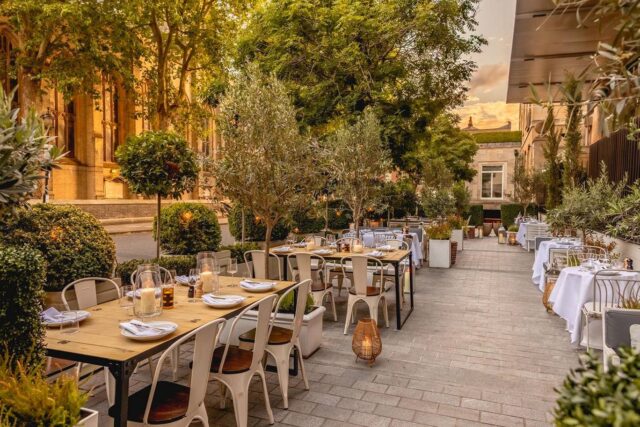 The Berkeley hotel in Knightsbridge has a shiny new al fresco restaurant called The Garden. Draped in fairy lights and dotted with lanterns, the foliage filled Mediterranean terrace, tucked between The Berkeley Bar and St Paul’s church, serves the likes of octopus with lemon aioli; roast cauliflower with smoked almond puree; and Greek-inspired saganaki with pomegranate and tomato salsa cooked al fresco on barbecues. Fingers crossed for Mediterranean weather… 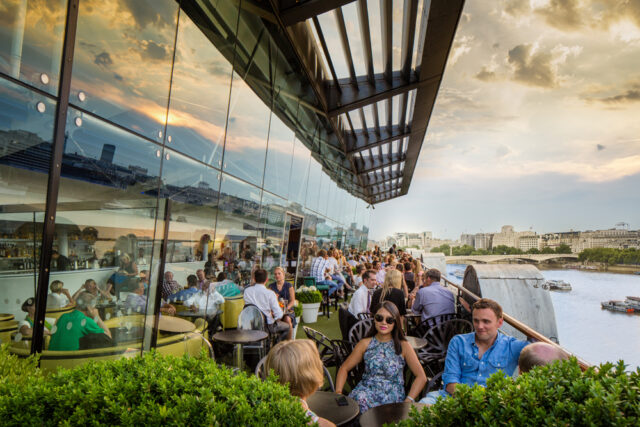 An oldie but a goodie, the Oxo Tower Brasserie is one of the Big Smoke’s quintessential al fresco spaces. Perched eight floors above the South Bank, the 200ft boasts serene views of St Paul’s dome. The casual dining venue serves seasonal modern European dishes like burrata with golden raisins and a balsamic dressing; yellow split pea soup with spiced yoghut and chilli oil; and grilled prawns with pickled shitake mayo and pickled cucumbers. The outdoor tables are allocated on a first-come first-served basis, and a word of warning – there is no outdoor heating. 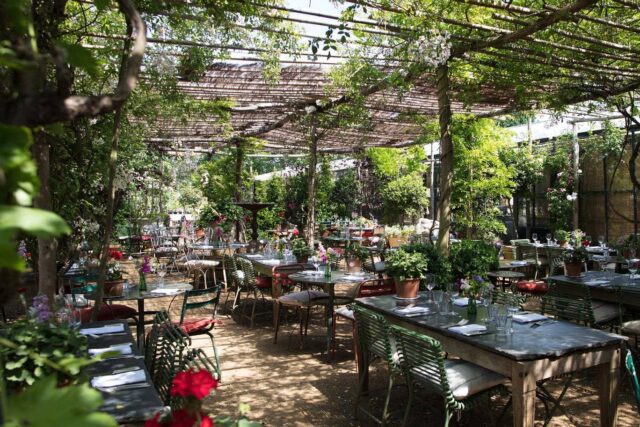 Run by the Boglione family, owners of Petersham House, which boasts a plant nursery within its grounds, Petersham Nurseries is a must for flower and foliage fanatics. Its glasshouse restaurant specialises in seasonal dishes made with produce from the family’s kitchen garden. On sunny says guests can dine under its wisteria and rose-covered outdoor pergola. Dishes on its current menu include courgette flowers with sage and borage; chilled tomato, cucumber and basil soup with salted ricotta; and tagliatelle with peas, crème fraîche and Amalfi lemon. At its sister site in Covent Garden, the floral courtyard is home to casual dining restaurant La Goccia.

Having started life as a staff canteen for Richard Rogers’ architectural practice, The River Café is now one of London’s best loved Italian restaurants where the all-Italian wine list is as carefully curated as Ruth Rogers’ seasonally focused menu. The riverside restaurant is probably best experienced al fresco in the venue’s garden, so it’s worth waiting for a fine day to dine. Outdoor tables, on the lawn or the heated terrace framed with fruit trees, need to be requested on booking. Rogers uses some of the produce from the garden in her dishes. On her current menu are chargrilled squid with chilli and rocket; Scottish langoustines with basil, mint and fennel; and sea bass carpaccio with marigold tomatoes. 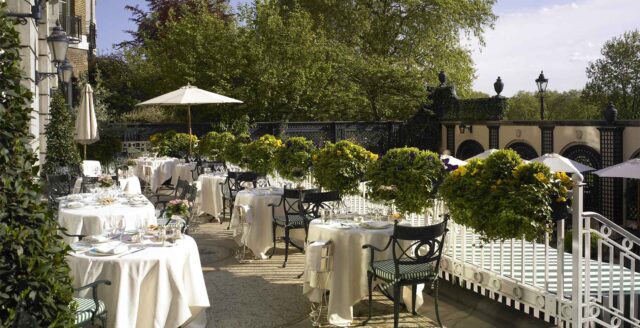 Open for the summer months, The Ritz Restaurant terrace is one of the capital’s prettiest (albeit priciest) al fresco dining spots, with its Italian-inspired parasols and racing green garden seating, abundance of blooms, mosaic flooring, and views over Green Park. While terrace tables can’t be booked in advance, they can be requested. Lucky diners can feast on John Williams’ thoughtfully conceived menu of seasonal dishes, such as pea velouté with Parmesan and almond; sea bream with courgette, basil and fennel; and Kentish strawberries with white chocolate and mint. The jacket and tie dress code still applies, but on hot summer days men are permitted to take off their jackets. 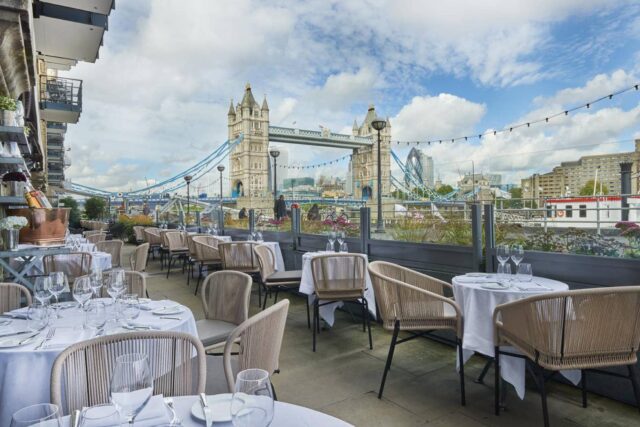 Another stalwart of the London dining scene, La Pont de La Tour, housed in a 19th century former tea warehouse in Shad Thames, offers gorgeous views of Tower Bridge at its outdoor terrace. While drinking in the views of the Thames, diners can enjoy modern twists on classic French dishes like steak tartare with watercress and garlic toasts; Cornish crab with pink grapefruit and dill mayo; and steak frites with café de Paris butter. 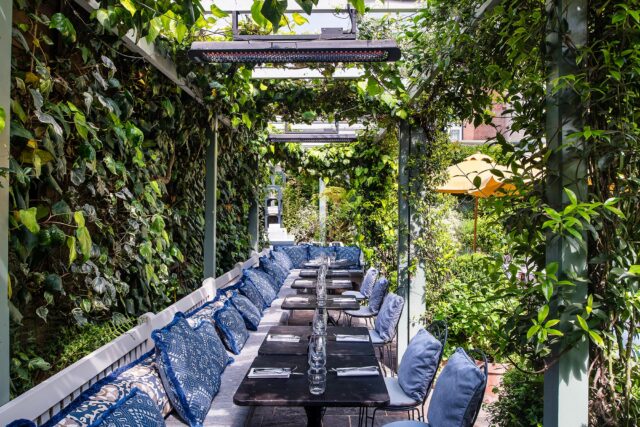 Richard Caring’s The Ivy group can seem to do no wrong. His Chelsea offshoot on King’s Road boasts art-filled interiors and its own outdoor terrace and orangery. Having recently been refurbished, the garden is currently bursting with blooms and fecund with foliage. But man cannot feast on vistas alone, so find a shady spot in the garden and tuck into bountiful mounds of zucchini fritti, truffle arancini, lobster linguine with tomato and chilli; and crispy duck salad with watermelon, toasted cashews, coriander and ginger. 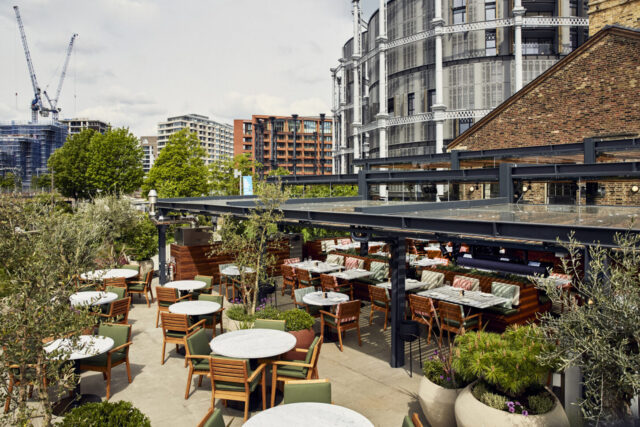 While many restaurants have terraces as an added bonus, Parrillan in King’s Cross’s chic Coal Drops Yard development, is a year-round al fresco restaurant. Specialising in grilling (and named after small tabletop charcoal barbecues) the Spanish-inspired venue, owned and run by the same team behind Barrafina, serves tapas dishes alongside meat, seafood and veggie offerings diners grill themselves on their own mini bbqs. Among the tapas are classics like pan con tomate; pimientos padrón; and ham croquetas, while the grill dishes include red prawns; milk-fed lamb kidneys; and Iberian pork lagarto with aioli. Walk-ins are available for the uncovered spots but canopy tables need to be booked in advance. 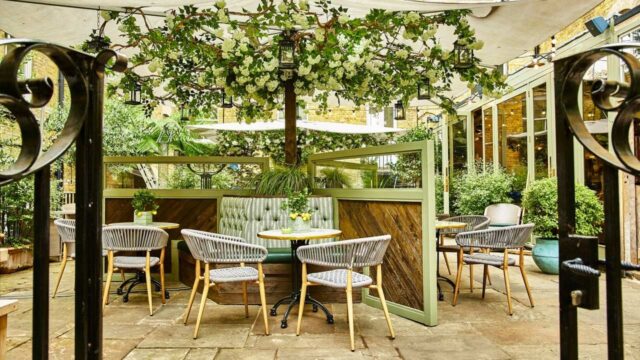 New in town is Stanley’s, which, slightly confusingly, resides on Sydney Street in Chelsea. At the helm is Masterchef: The Professionals finalist, Olivia Burt, who has crossed town from Claridge’s to head up the 102-cover venue, which boasts a large outdoor terrace. Named after owner Hugh Stanley, who comes from a long line of horse breeders, the site has a garden feel throughout and serves modern British dishes made with seasonal ingredients. Among the dishes on Olivia’s debut menu are: whipped smoked cod’s roe with buttermilk flatbreads; crisp prawns with sriracha emulsion; and beef tartare with pickled shallots and smoked egg yolk. 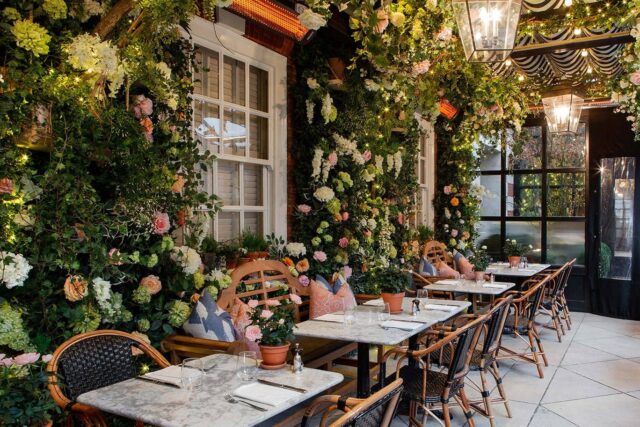 Taking inspiration from its Bloomsbury location and the best known novel of one of the Bloomsbuy group’s leading members – Virginia Woolf’s Mrs Dalloway, the Dalloway Terrace at The Bloomsbury Hotel changes its décor in keeping with the shifting seasonas. Filled with flowers all year round, in summer the terrace is transformed into an English rose garden, while winter sees it festooned with white blooms.

With its heaters and retractable canopy, the terrace is open throughout the year, with panama hats passed around in the summer and blankets offered to diners when the mercury dips. On the food front, expect the likes of crab croquettes with citrus mayo; tuna sashimi with pickled rainbow radish and a ginger, ponzu and sesame dipping sauce; and chicken Milanese with capers, lemon and Parmesan. 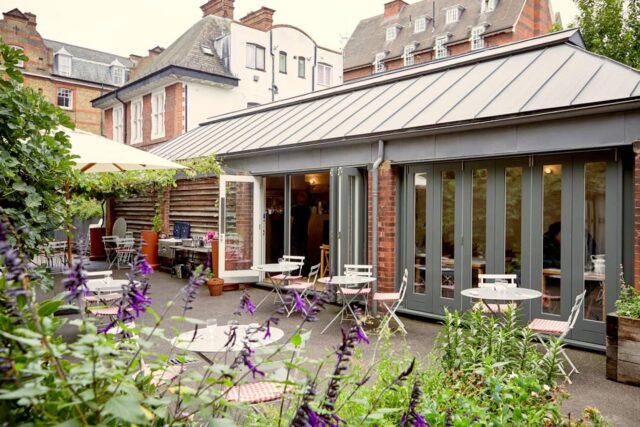 Housed in a converted Victorian school bike shed, Margot Henderson has long won foodies over with her simple seasonal fare at Rochelle Canteen in Shoreditch. It even appeared in the London episode of Anthony Bourdain’s brilliant food focused travel series, Parts Unknown.

Bourdain and Henderson were filmed enjoying lunch at the venue’s vine-filled al fresco dining area and discussing the results of the Brexit referendum and what that meant for the future of the UK. Among the dishes on Henderson’s current menu are: barbecue squid with harissa and tomatoes; kohlrabi with cucumber and feta; lemon sole with capers and dulse; and roast pork loin with shallots and anchovy. For added privacy, you need to press a buzzer to be allowed inside the grounds. 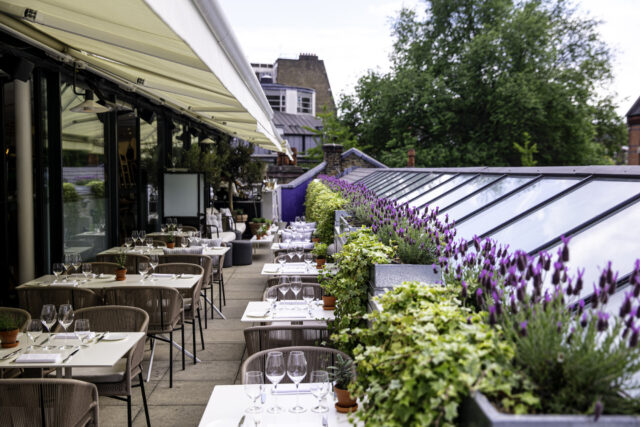