A book by former chairman of France’s National Cancer Institute, David Khayat, urges people to enjoy life’s pleasures, from sex to wine, and, as one might imagine, it’s attracting much debate. 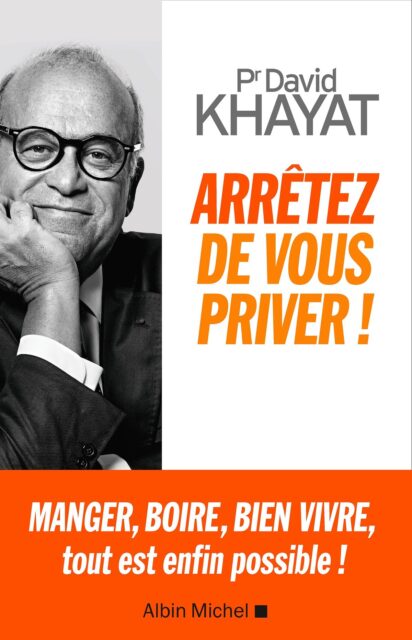 Following the release of his newly-published tome, Arrêtez de Vous Priver (Stop Depriving Yourselves), Khayat has featured in a range of leading French media over the last few days, promoting the message that people should have a “few small excesses, without feely guilty,” as reported by French commercial radio network, RTL.

Such indulgences are necessary for a person’s self-esteem, according to Khayat, who points out that the constant denial being promulgated by organisations, governments and some doctors are in fact harmful to the mind, while making little difference to the body.

Indeed, in an interview with Adam Sage at The Times, which was posted online yesterday, he says that the health risks from enjoying chips, meat and alcohol are being inflated by “rarely very great doctors”, who, he adds, are keen on imposing their “hygienist” vision of society.

In particular, he is critical of the “dogmatic” approach by the World Health Organisation (WHO), dismissing its guidance on risks from electronic cigarettes to processed meat.

Commenting that the former are “not a problem at all”, he then attacks the group’s claim that 50g of processed meat a day raises the risk of colorectal cancer by 18%.

He told The Times, “They tell you the rise in the risk is 18%, but they don’t tell you what your risk is in the first place. In fact, it is 2%. So if you stuff yourself with ham, your risk goes from 2% to slightly over 2%. Is it worth depriving yourself of a slice of ham for that?”

In place of WHO, he suggests people follow the precepts of Epicurus, who advocated enjoying modest pleasures for tranquility of the mind.

In essence, Khayat says that people “need balance”, and, having recommended drinking wine and having sex, he says, “life without pleasure makes no sense”.

Writing in The Times, Sage points out that the respected oncologist’s book and comments are a French response to British and American campaigns favouring dieting and abstinence.

Sage mentions England’s former chief medical officer, Professor Dame Sally Davies, who warned women that every glass of wine increased their risk of breast cancer, and US breast surgeon Kristi Funk, who suggested that they give up meat and dairy products too.

While Khayat’s comments have generated ‘fierce public debate’ according to The Times, they have been welcomed by many in the France, with Le Figaro praising his “positive and liberating message”.

FOUR TIMES SCAREMONGERING STUDIES ON ALCOHOL HAVE BEEN DEBUNKED