Vas-y Coupe, translated as Wine Crush, is an interesting cultural documentary about a harvest in progress at Jacques Selosse that’s crying out for a narrator, finds Roger Morris.

Is there a difference between telling how wine is made and telling how to make wine? There is, and it’s called Vas-y Coupe, a cinema vérité film that is scheduled to be streamed on Apple TV and Amazon video on demand beginning 8 October under the anglicised title of Wine Crush.

And those viewers who want to know the former will be delighted by the 90-minute film, and those looking for the latter will give up a few minutes into this documentary directed by Laura Naylor.

Wine Crush is the story of a small group of ageing men from an unnamed French village who every harvest drive to the Champagne vineyards of Domain Jacques Selosse to pick grapes, bringing with them a working-class culture that for the harvest tries to interface with Selosse’s more-cosmopolitan winegrowers’ culture. Sometimes the cultures clash, but in the end they get the grapes into the Selosse cave. 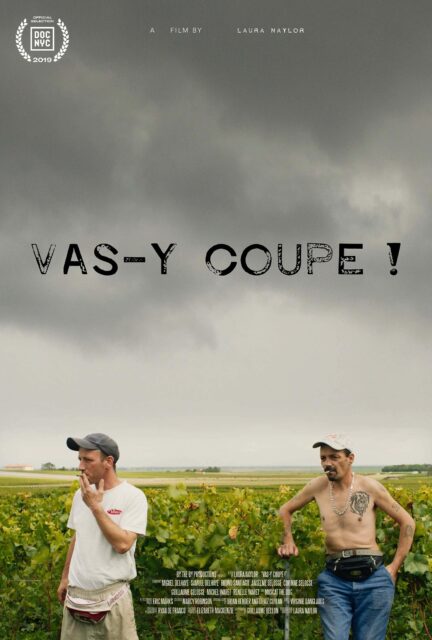 What makes the film interesting – or maddening, depending on your point of view – is that there is no narrator or narrative explanation of what is going on, how decisions translate to how wine is made.

All we have is the unrehearsed dialogue of the winery crew and the picking group, sometimes separate, sometimes linked together, which is recorded all in French with English subtitles. We see a truncated view of how wine is made by observing the chatter and actions of both crews, a great inter-cultural study, but we get no insight into how to make wine.

For example, we see almost nothing of what occurs between when the grapes are picked and murky sequences of Anselme Selosse in his barrel cellar, pulling bungs and wafting the aroma with his hand to his nose while quizzically looking heavenward.

Without shots of the sorting, crushing and fermenting, we are given no explanation as to how the grapes or juice got into the barrels and whether Selosse is nosing this year’s wine or a reserve from a previous vintage. There is nothing in the cellar that hints of making Champagne, and we’re left to wonder why Naylor chose to make a wine film with so little emphasis on winemaking.

But what does make the film interesting, if seldom fascinating, is what anthropologists would deem a form of ethnography, the close-up viewing and recording of a culture without trying to influence or re-stage its actions. Naylor’s aim is pure. Except in the selection of what she chooses to film for us to see, she doesn’t tell us what we are to think about it.

Nevertheless, there is a pervasive feeling that, as these workers age and perhaps encounter alternate work opportunities, they may not be back next year or the year after, and that as young Guillaume Seloisse takes over for his father, he may not want them back.

As happens in most slice-of-life documentaries, we encounter what I would term the typical “documentarian’s melancholia” – watch closely, audience, because a way of life is disappearing, and this may be your last chance to see it. And in that plaint, they ask that we, the audience, care.

But should we? Yes, we see a lot of middle-aged men being middle-aged men – drinking, swapping stories, repeating insults and complaints (“why do you get a 20% bonus, while I only get 10%?”) Add to that the warmth of the family and staff cooking huge meals for both the picking and cave crew (there is more cooking than winemaking in this film) and caring whether the crew likes it or not.

They appear concerned about the men’s welfare. The weather is crappy, so will the grapes be any good (pray for a sorting table from what we are shown), will there be enough of them, and will the harvest be completed on time? Then there’s the succession story of father-to-son, the only part of the film that occasionally seems staged.

While not Kardashian in import, Wine Crush or Vas-y Coupe is interesting if you like reality shows where the main entertainment is people watching with minimal storytelling. But caring? Not beyond what we would normally care about anyone’s health and economic welfare. Nothing in life stands still, and not everything should be preserved. In the end, there is no craft or lifestyle in Wine Crush to mourn when it slips away.