Jameson whiskey teams up with Irish brewery on new expression

Jameson owner Irish Distillers has teamed up with Eight Degrees Brewing on a new edition of its Jameson Crested expression. 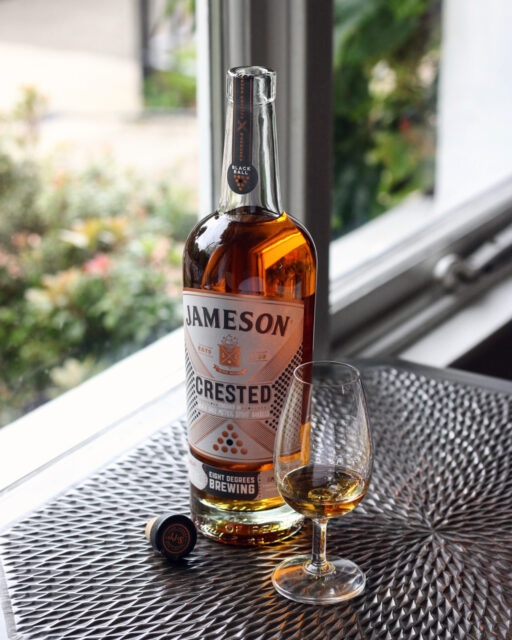 Jameson and Eight Degrees Brewing, which are both based in Ireland’s county Cork, have previously worked together on a beer. To celebrate its eighth anniversary last year, Eight Degrees released the Black Ball Metric Stout, which it finished in Jameson whiskey barrels.

Jameson has now done something similar with its whiskey, finishing its spirit in the stout barrels.

Blender at Irish Distillers, Dave McCabe, said: “We were delighted when the opportunity arose to create a truly special whiskey. When we were selecting a whiskey to mature in these barrels, Jameson Crested became the obvious choice. It’s higher pot still component and Sherry cask inclusion allowed the whiskey to meet the impact of the stout head on, creating a balanced reaction.

The spirit was put into the stout casks last November and spent four months in barrel.

McCabe added: “The stout influence is prevalent in the taste, complementing the whiskey beautifully. It’s a truly unique liquid, perfect when enjoyed neat, paired with a craft stout, or as part of a spiced cocktail.”

A total of 10,000 bottles of the limited-edition expression have been produced, and it will be available to buy direct through Jameson’s online shop for €45 a bottle. The bottling will also be sold at Dublin Airport’s terminal two from mid-October.

Derek Neville, head cellarman at Eight Degrees Brewing, commented: “It was an honour to be given the opportunity to create our special 8th anniversary stout using barrels from Jameson, the world’s most popular Irish whiskey. Today we are delighted to have made our mark on Jameson Crested, an icon of Irish whiskey, through the release of this special edition.”

According to the producer, the whiskey has notes of malt, vanilla, chocolate, dried fruit and coffee beans with a creamy mouthfeel.

Jameson rebranded its Crested whiskey back in 2016.