Excerpt from Firing Blancs by Peter-Stafford-Bow

Felix Hart, Head of Wine at Gatesave Supermarkets, is obliged to attend the ‘Festive Forum’, the board of directors’ inspection of Gatesave’s proposed Christmas range. The malevolent CEO, Sweaty Parker, singles out Felix’s drinks range for close interrogation… 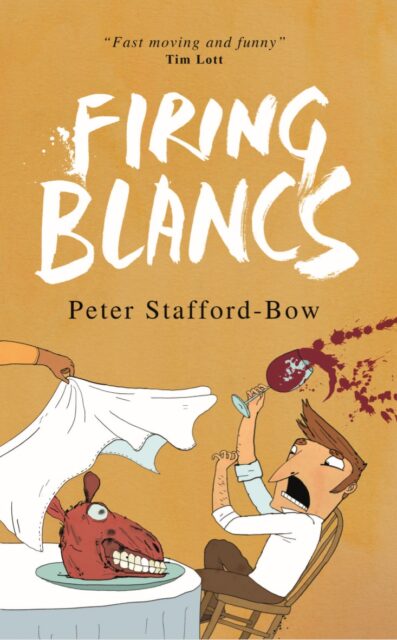 “Hart! I said a few thousand bottles of Sherry aren’t going to turn around our deplorable market share performance!”

I snapped out of my reverie to find Parker’s damp face just inches from my own.

“Apologies, sir. I was just calculating how much profit we’re going to make this year on Buck’s Fizz. Over a million pounds more!”

“Buck’s Fizz isn’t going to save you any more than Sherry is. The market for those products is in decline. What’s new? It had better be good, Hart. I have a feeling you’re taking us for a ride.”

“Of course, sir, you’re right. Growth can only come from innovation.”

I nodded to my assistant. She lifted a bottle from the table and presented it to Sweaty Parker.

“Our hero product this year… is glögg!” I declared.

The silence felt as thick as a super-premium mince pie. But I was prepared.

“Of course, this beverage is currently little-known to the drinkers of Britain. But, this Christmas, glögg will be on everyone’s lips!”

“What the hell is glögg?” sneered Parker, his moist face still uncomfortably close to my own. He snatched the bottle and scowled at it.

“It’s the Swedish version of mulled wine, sir. But this is a hundred times more delicious than a stewed saucepan of plonk with a half an orange floating in it.”

My assistant lifted a tray of small glasses, each filled to the brim with a steaming, cloudy, red liqueur.

“I don’t like mulled wine,” said Parker, banging the bottle down on the table. “And I don’t like your idea either. If this is the best you’ve got, we’ll be looking for a new Head of Wine, very shortly.”

“I promise you, once you’ve tried glögg, you’ll never look back! The wine is infused with Madagascan vanilla, Indian cardamom and Jamaican ginger, and blended with juice from the plumpest Californian raisins. It’s bursting full of flavour!”

Oh heck, I thought. This is going badly. Come on you sods, Christmas is coming! Get some bloody festive spirit inside you. I nudged my assistant and she approached the other directors with the tray.

“Try it!” I ordered, fixing the Director of Finance with gleaming eyes. “Close your eyes and think of mistletoe!” Perhaps I had sampled a couple too many wines earlier, I mused.

The Director of Finance squinted at the little tent-card boasting a sixty percent profit margin, complete with exclamation mark, and raised a glass to his nose.

“It does smell of Christmas, I suppose,” he muttered.

“Smell the fruit and taste the margin!” I said, feeling slightly unhinged.

The other directors lifted their glasses, but Parker remained unmoved. “I’m still halving your travel budget,” he said.

“Mmmmm,” declared the Director of Supply Chain, a ruddy-faced man with a vast belly. “That is nice! I might have another.”

“I don’t like the name,” said Parker. “Glögg. It sounds too foreign. Glögg,” he repeated, scowling.

“Everything Swedish is very fashionable right now,” I said. “I checked with the home accessories buyer, and glögg-scented candles are the market’s fastest-growing aroma.”

Genius. That got his attention. Hell, I was good. Parker unfolded his arms, hesitated, then took a glass of the gently steaming beverage.

“If I don’t like it, we’re not selling it,” he said, and poured the liquid into his mouth.

“You’ll love it!” I said, praying to Bacchus for divine intervention.

“What are all those bits in the bottom?” sniffed the Director of Human Resources, screwing up her face.

“Oh, that’s a Swedish tradition,” said my assistant. “You add nuts, raisins and spices to the glass then pour the glögg on top.”

“Sounds like a choking hazard,” she said, poking at the stray nuts with her finger. “I hope there are no bits in the bottled product?”

“No, don’t worry! I don’t think Bill would allow us to add fragments of nuts and cinnamon to a bottle of wine, would you, Bill?” I gave the Senior Technical Manager a wave.

“So, does everyone like it?” I asked, watching Parker’s face. He was sweating quite assertively, little rivulets of moisture tracing paths down his cheeks, and he appeared to be concentrating intensely on the flavour, eyes wide and head tilted back.

There was a somewhat unsettling period of silence. All eyes were on Sweaty Parker. Would glögg be the Christmas Hero line or would I be stripped of my rank and put in charge of festive toilet tissue? Come on, you sweaty sod, I prayed, give us a sign!

“Arrghh,” croaked Parker. He raised a hand to his throat and attempted to insert the other into his mouth.

No-one moved. Perhaps it was the heady aroma of mulled wine, mince pies and brandy butter, but everyone appeared rooted to the spot, as if drugged by the booze-laden air.

Parker made several more distressed noises and attempted to push his hand further into his mouth.

“Pat him on the back!” someone shouted.

The Director of Supply Chain discarded his empty glasses of glögg and positioned himself behind Parker. Then he balled his huge fist and thumped him between the shoulder blades. Parker flew forward and sprawled across the party food table, his face pressing into a pile of mini samosas.

Several dozen festive nibbles catapulted themselves high into the air, raining down on neighbouring tables like a breadcrumb-coated air strike. Parker began making horrific wheezing noises, his groans punctuated by the tinkle of crockery and the patter of spherical party bites dropping to the carpet.

The Director of Supply Chain raised his huge fist once more.