US is a ‘replaceable’ importer of European wine

Two major US wine trade bodies have warned that the tariffs imposed on European wine are damaging the American market, with exports to China and other markets “replacing” those to the US. 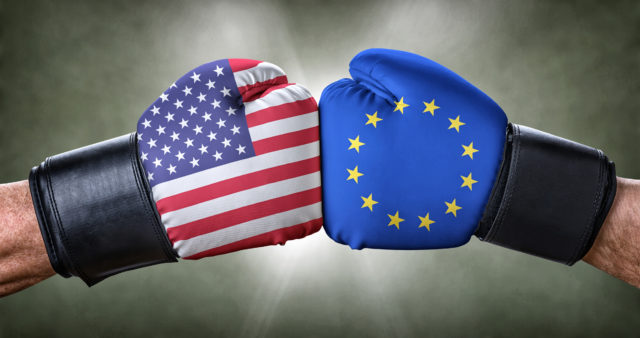 The US Wine Trade Alliance and the National Association of Wine Retailers (NAWR) have warned that wine previously exported to the US is now ending up in China and other markets.

The trade bodies make three main arguments. The first is that the US is a “replaceable importer of European wines”, meaning that European producers can find other markets where they can distribute their products.

Secondly, they state that for the US, these wines cannot be replaced with domestic products – ie. the US cannot produce enough wine itself to make up for the shortfall in imports.

Finally, they state that due to the three-tier system governing the sale of alcohol in the US, 75-85% of the selling price of each bottle of wine “is profit or taxes taken by American entities”.

In October 2019, the US government implemented 25% tariffs on still wine (not over 14% ABV) made in France, Germany, Spain and the UK, transported in containers of 2 litres or less; liqueurs made in Germany, Ireland, Italy, Spain and the UK; and Scotch. The tariffs were put in place owing to long-running dispute over subsidies given to Airbus over rival aviation company Boeing.

In December, it was revealed that these tariffs could be raised to up to 100%, as well as extended to cover a wider range of goods.

The proposed new list includes bulk wine, fortified wine and sparkling wine from all EU countries, as well as other whiskies made in Europe, most notably Irish whiskey.

The United States Trade Representative (USTR) will make a decision by 17 February as to whether they will expand the tariffs.

Harry Root, head of the US Wine Trade Alliance said: “Due to ill-advised tariffs on wine, we are witnessing the direct transfer of the American-European wine trade to China and other markets and the only people getting hurt are American business owners and consumers.

“China is a ready and willing customer for European wines not sold to American importers. New numbers from the Global Trade Atlas verify that the 25% tariffs are already speeding the growth of the Chinese market.

“The transfer of a healthy, thriving industry to our biggest trade adversary is too great a price to pay for an ineffective trade action. Future action should target products that will effectively apply pressure to the EU to stop the Airbus subsidies and not disproportionately harm American business.”

Meininger’s Wine Business International has reported that the EU is releasing US$1.3 billion of its five-year funding cycle for immediate use to help companies build new trade partnerships. It is also adding $12 million to the EU marketing budget for 2020, and allowing companies to redirect marketing plans without restriction.

Bordeaux’s wine trade is also campaigning for a €300 million compensation fund to make up for losses incurred as a result of two trade disputes with the US.

US-based sommeliers, wine importers and restaurateurs took to the streets of Washington DC last weekend, campaigning for an end to the tariffs.

One of the attendees, sommelier Erik Segelbaum, told Bloomberg: “A lot of people think, ‘oh boohoo, a bunch of wealthy elitist snobs will have to pay more for wine,’ and their second thought is ‘this will be good for American wines. That’s not true.”

He added that a $9 glass of a wine and a $20 pasta dish could end up costing over $70 in a restaurant if proposed tariffs on Italian food products and wine go ahead, and mark-ups are taken into account.

“Even as a lover of wine, I’m not going to pay more than double,” he said.