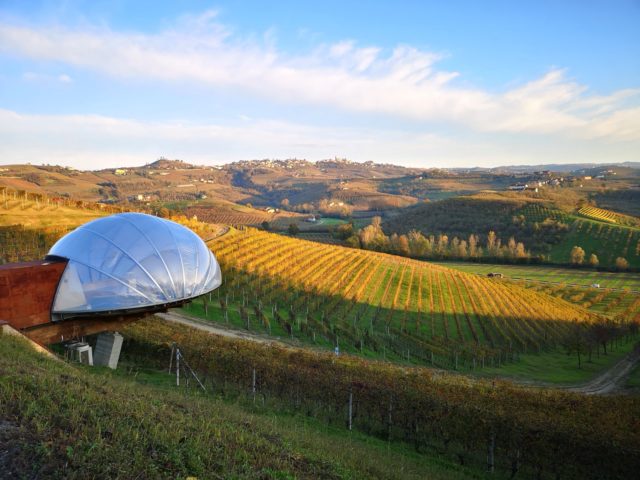 The forecast predicted rain, but db’s editor, Lucy Shaw, was treated to blue skies and jewel-like vines bathed on golden light when she arrived in Piedmont this week to visit family-run estate Ceretto. Her first stop was to Ceretto’s Monsordo Bernardina estate in Alba, the family firm’s hub where its leading labels are made and the wines from its four estates are stored. 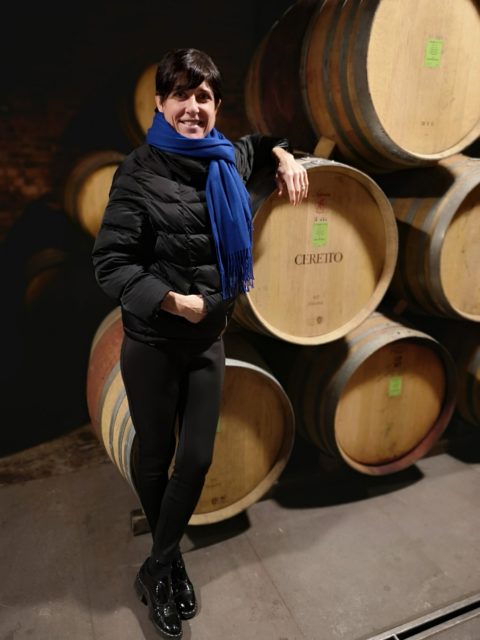 Founded in the 1930s by Riccardo Ceretto then passed down to his sons Bruno and Marcello in the 1960s, who went on to be known as the ‘Barolo brothers’, today Ceretto is run by third generation family member Roberta Ceretto, her brother Federico and cousins Alessandro and Lisa, who all began working for Ceretto in 1999. Bruno and Marcello are widely credited for pioneering a more modern style of winemaking in Piedmont. Specialising in estate-bottled, single vineyard wines, Ceretto is among Piedmont’s most progressive producers. 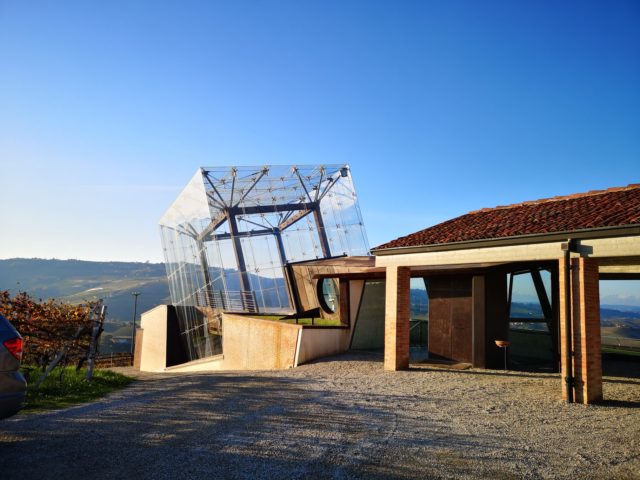 In addition to making fine Barolos and Barbarescos, the Ceretto family are also big investors in contemporary art – an initiative pioneered by Roberta Ceretto. At their four Piedmont estates you’ll find sings of their passion for art and architecture, including this quirky glass cube at their Bricco Rocche estate. A real sun trap, Roberta revealed that guests tend not to be able to spend more than 10 minutes inside the cube without getting dizzy due to its jaunty angle. 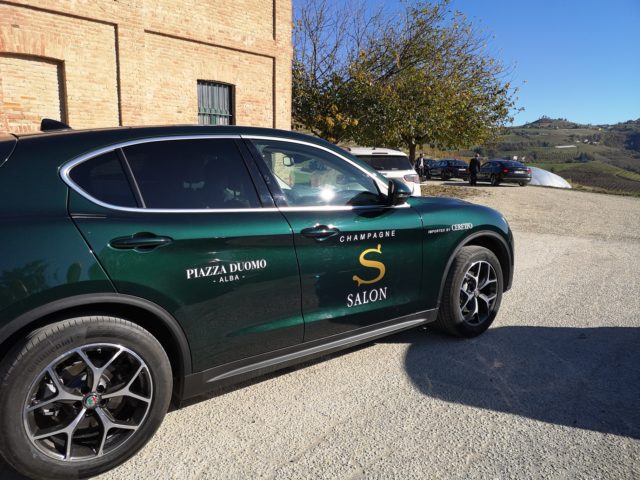 As fate would have it, our trip coincided with a visit from Champagne Salon’s president, Didier Depond, as Ceretto distributes Salon in Italy. Depond had gathered some of Italy’s top sommeliers and was due to present them with the 2008 vintage, of which only a minuscule amount has been made and bottled entirely in magnum. Those interested in snapping up a mag will also need to buy two bottles of the 2006 and two of the 2007 vintage to seal the deal. 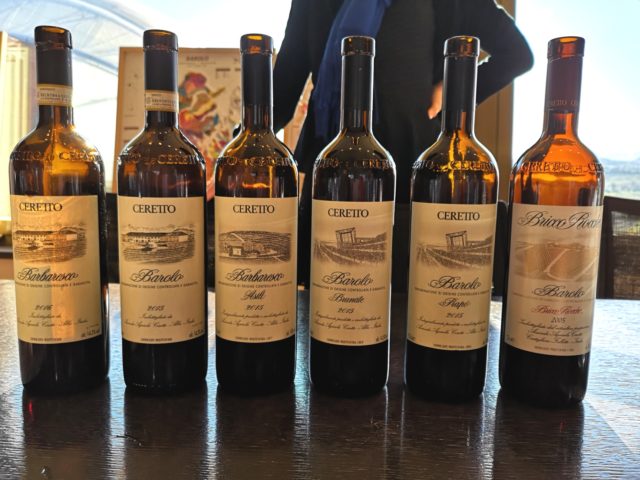 After a tour of the Monsordo Bernardina estate in Alba, we got stuck into a tasting of Ceretto’s single vineyard Barolos and Barbarescos, as well as those made from a blend of grapes from their four estates. All of the wines shared a thread of elegance, brightness of fruit and red fruit flavours. While many of the Barolos had the concentration you’d expect from the region, all had a lightness of touch and fine grained tannins that made the wines incredibly approachable despite their youth. 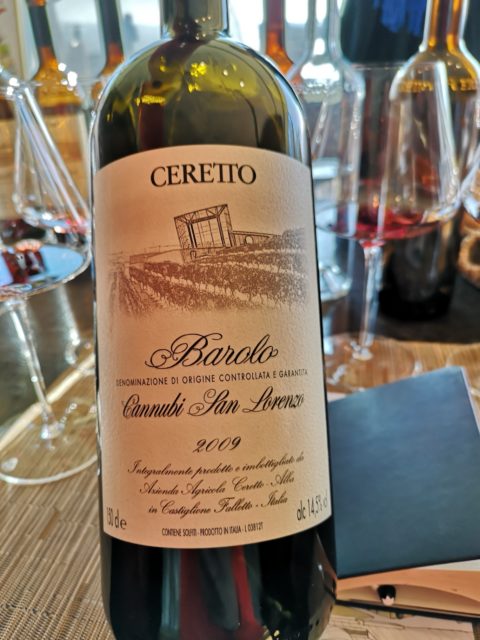 As a comparison, we also tried the 2009 vintage of top drop Cannubi San Lorenzo, which is only made in standout years and bottled in magnum. With 10 years on the clock this wine sang with notes of sour cherries, dried herbs, forest floor and truffles, and had a charming florally to it. Barolo rewards patience and the wines come into their own after a decade. The problem is having the patience to lay them down for that long. 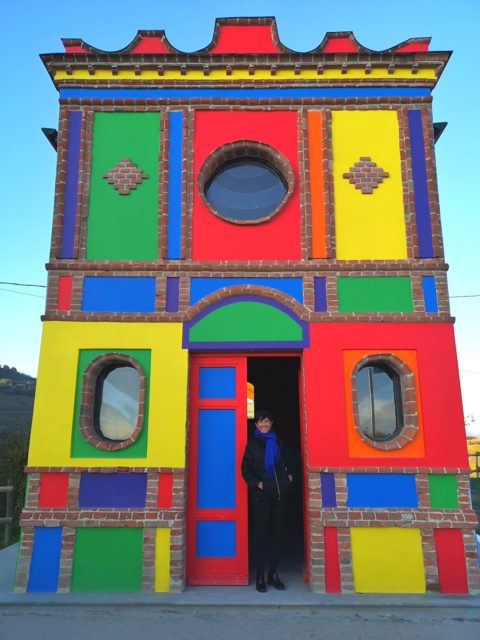 One of Ceretto’s best known art projects is its colourful chapel in Alba, designed by Sol Lewitt and David Tremlett in 1999. The chapel was built in 1914 but never consecrated. Snapped up by the Ceretto family in 1970, in 1999 Roberta asked Lewitt and Tremlett to work their magic on the building, with the former creating the eye-poppintly bright exterior and the latter designing the more serene interior. It’s now a popular picnic spot. 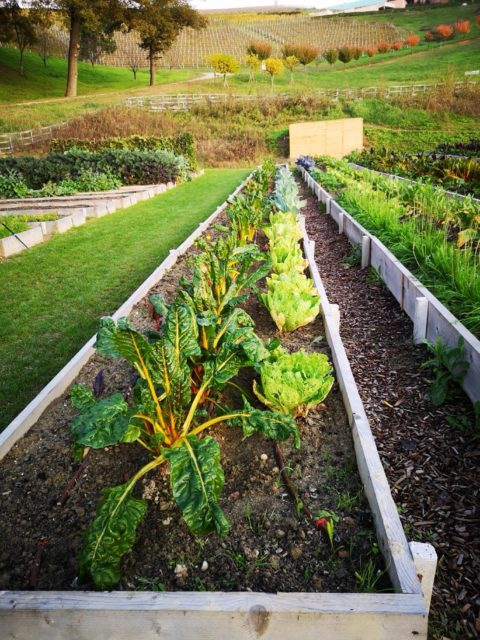 Fresh from the chapel we headed to chef Enrico Crippa’s kitchen garden within the grounds of the Monsordo Bernardina estate. In addition to their art and wine projects, the Ceretto family own and run the three Michelin-starred restaurant Piazza Duomo in Alba, which Crippa has been at the helm of since it opened in 2005. Fanatical about seed to plate eating, Crippa grows the majority and herbs and vegetables used at Pizza Duomo, a large number of them appearing in his signature salad, which features no less than 50 different elements. 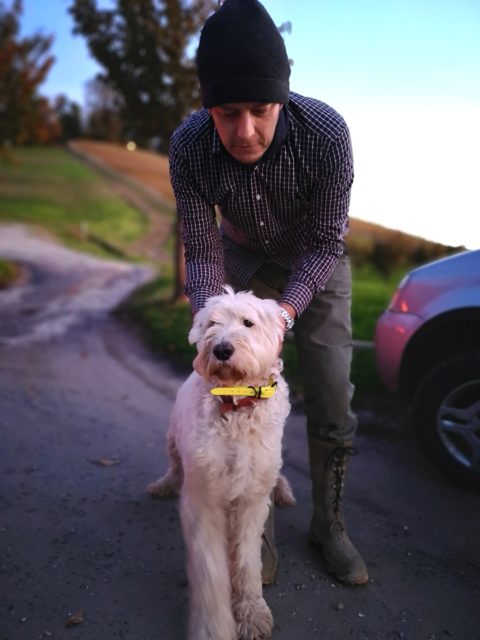 Our visit coincided with peak white truffle season in Alba, so we ventured out on a nocturnal truffle hunt by the light of the full moon with local hunter Carlo and his trusty hound Buc. Being white, he proved relatively easy to keep up with while wading through the forest. Interestingly, truffle hunting is a bit of a free for all and local landowners have no claim to the nuggets of white gold unearthed on their grounds. The cost of a white truffle is ten times that of a black, so hunters head out either in the early hours of the morning or late at night so they won’t be spotted. 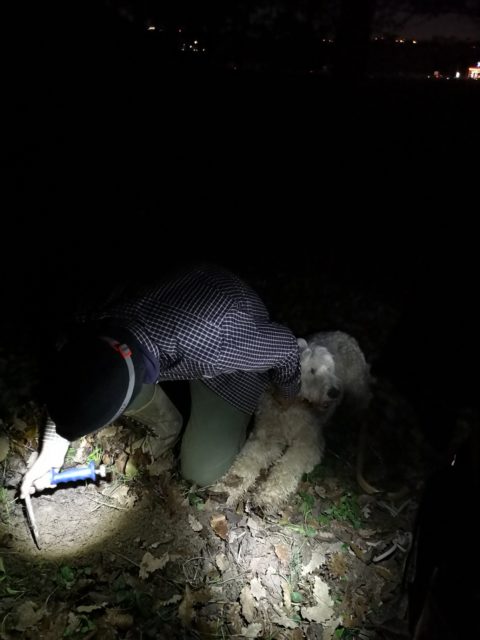 It took a while for Buc to sniff anything out but after a while he started circling a small patch of land and began digging furiously. Carlo took over and started uprooting the soil. He knew he was on to something when he sniffed the earth and it had the unmistakable musty aroma of white truffle. White truffles tend to grow near one of four trees: oak, willow, linden and poplars. 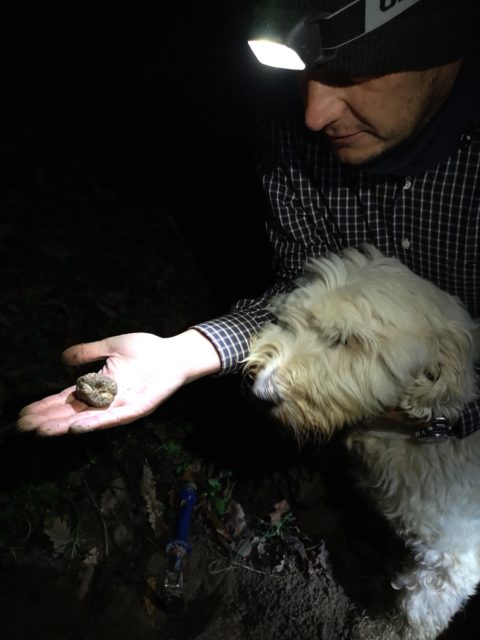 The calcium carbonate-rich soils in Alba have helped the region to become the most revered place in the world for white truffles, which can sell for as much as €250 per 100g. They have to be eaten quickly though, as they soon start shrinking and losing their freshness. After a few minutes of digging Carlo unearthed this nugget of white gold as Buc looked on longingly. 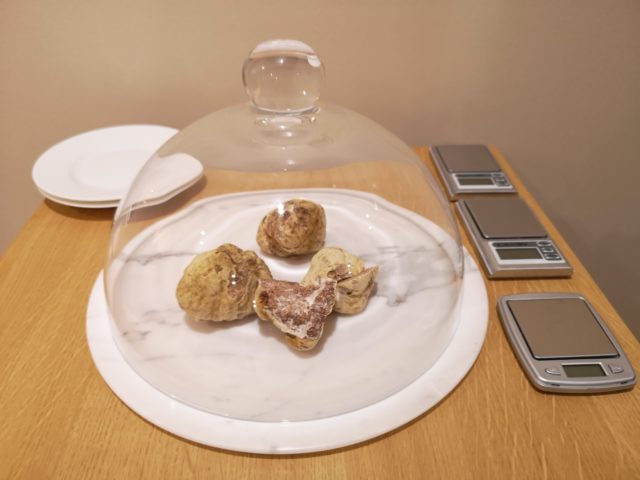 We’re not sure if it’s the same truffle but there were a number of nuggets on display at Piazza Duomo, named after the square where the restaurant resides, where we were lucky enough to dine that evening. 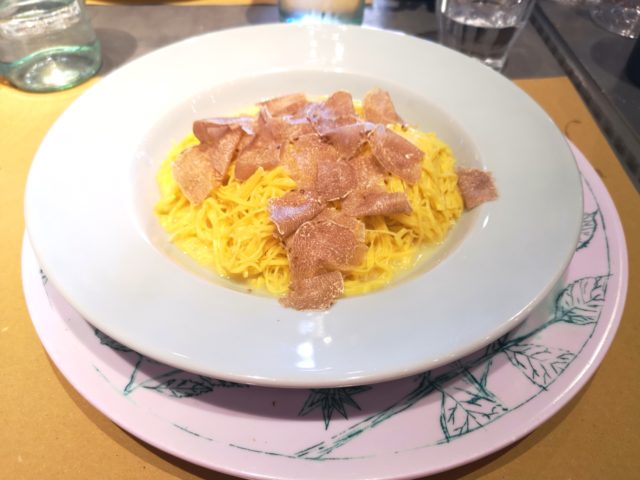 The following day the truffle was put to good use at Ceretto’s more casual sister restaurant, La Piala, beneath Piazza Duomo, where we greedily tucked in to a sublime bowl of buttery tajarin pasta blanketed in tartufo bianco. 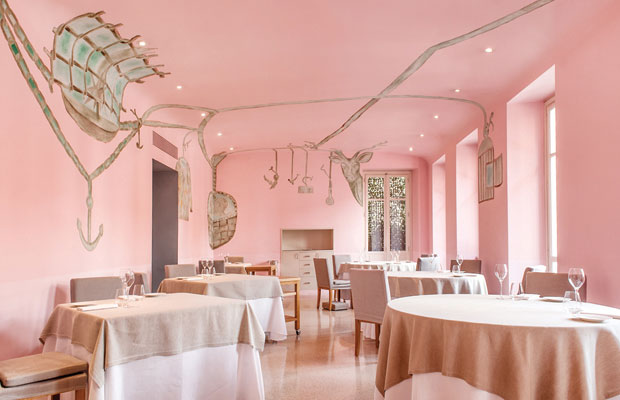 Pastel lover Lucy was delighted to discover that the dining room at Piazza Duomo is pale pink. After stints working for Michel Bras in France and Ferran Adria in Spain, Enrico Crippa opened the restaurant with Ceretto in 2005 and won his first star a year later, second in 2009 and third in 2012, making him one of under a dozen restaurants in Italy to boast that accolade. 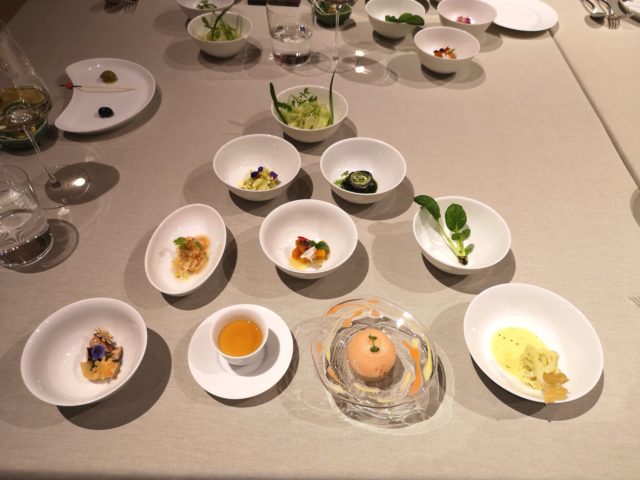 One of the highlights of dinner at Piazza Duomo was our 10-part starter, which leans heavily on produce grown in Crippa’s kitchen garden picked the same morning it’s served. Among the miniature delights was a cloud-light foie gras mousse with ginger foam and a peanut biscuit, tiny pickled mushrooms, a simple but sensational puntarelle salad with chickpea purée, and a clever sweet-savoury starter of salted crême caramel. 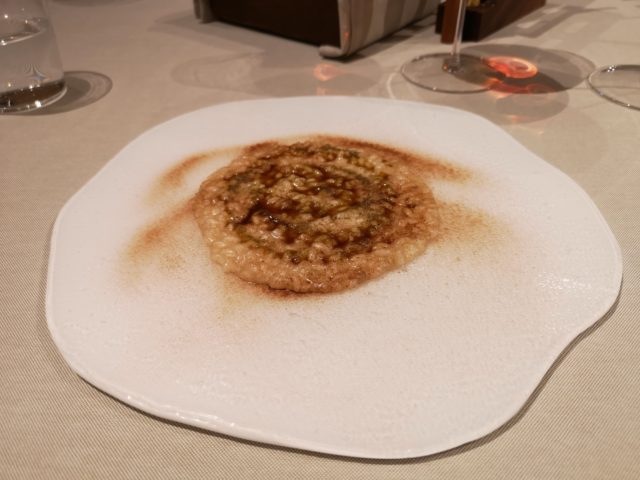 Another intriguing dish was this al dente risotto with chestnuts, chocolate, a liver reduction and lemon jelly, which sounds like it shouldn’t work but absolutely did, and paired a treat with our balsamic-scented Ceretto Bricco Rocche Barolo 2012 and autumnal Bernadot Barbaresco 2015.