London-based members’ club for wine lovers, 67 Pall Mall, is to open its first international outpost in Singapore, which will feature a 5,000 bin wine list, and has hinted that it may open further locations around the world. 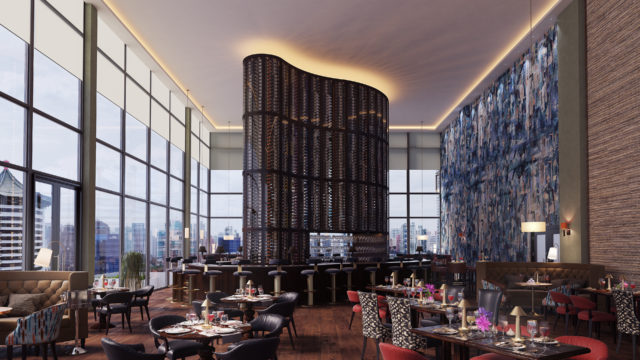 The London wine club’s Singapore site is set to open in the autumn of next year, boasting wines from 42 different countries, with 1,000 available by-the-glass, and an event schedule curated by Singapore’s three Masters of Wine.

Members of the new club will be granted free access to the London original as well as to clubs “around the world that will be opening in the future”.

Based in a penthouse location with double height ceilings in the Orchard Road district of the city, the 15,000 sqft site will be located in the Shaw Centre. The site will retain the name of its London mothership, being christened 67 Pall Mall Singapore.

Like the London original, 67 Pall Mall Singapore promises to “democratise fine wine” and offer a pricing structure that allows its members to broaden their horizons.

As part of the package, the Singapore site will store its members’ wine collections in a cellar which will maintain a constant temperature of between 13 and 14 degrees and humidity levels of between 65 and 70%. Members can also bring a bottle of their own wine to the club in return for a “small corkage fee”.

The food menu will incorporate dishes served at the London site as well as a “selection of iconic regional dishes”, and will be open for breakfast through to dinner. The events programme will include masterclasses, tasting dinners, walk-around tastings and more casual drinks gatherings, all curated and presented by Singapore’s three resident Masters of Wine.

The club will also be a provider of WSET courses, which will be taught by MWs.

Founder and CEO Grant Ashton commented: “We are thrilled to be able to bring people together with a shared passion for fine wine, and to take the 67 Pall Mall journey to the next level.

“Singapore is a sophisticated market with an increasing appetite and appreciation for wine, making it the natural choice in our first step to international expansion. By merging the best of what we have established in London with Singapore’s unique culture and heritage, we are creating a haven for wine lovers that is deserving of this thriving and cosmopolitan city-state.”

In the same year, the wine club announced that it was expanding its premises, opening a new floor and adding a further 96 covers.

In 2018, 67 Pall Mall won Wine List Confidential‘s Wine List of the Year, receiving praise for its wine selection and spotless Zalto stemware. This year, the institution picked up another award, this time for its by-the-glass offering. One judge described the institution as “like a candy shop for wine lovers”, while another said: “The scope of the list leaves you breathless with excitement. It gives you an opportunity to taste those legendary wines – if you’ve always wanted to taste a First Growth, you can.”