Accredited beer sommelier, judge at The Drinks Business Beer Masters and the UK and Europe representative for the Brewers Association, Lotte Peplow, rounds up the top trends from this year’s Great American Beer Festival, from the move towards sessionable styles to the growing link between wine and beer. 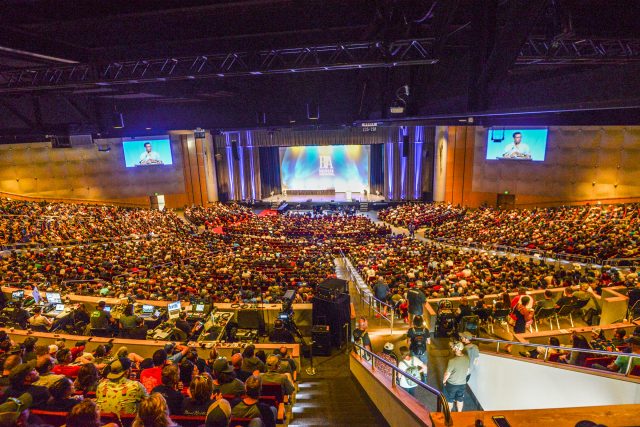 Beer festivals come in many different guises, some focus on real ale, some on sour beers and others on stouts and dark beers but there’s one festival that focuses on, well, everything! Organised by the Brewers Association, the not-for-profit trade body representing small and independent American craft brewers, the Great American Beer Festival (GABF) is a gargantuan monster of a beer festival pouring over 4,000 beers from 800 breweries and attracting 62,000 visitors over three days. It takes place in Denver, Colorado every autumn, and September 2018 saw the 37th, and biggest ever, edition of the festival.

Housed in a cavernous convention centre the size of eight football pitches, GABF is a mind-blowing, overwhelming and unique experience. Taking place at the same time is the GABF competition, the largest commercial beer competition in the world, featuring 8,500 beers from 2,404 breweries which vied for brewing excellence in 102 different beer categories and were judged by 293 judges from 13 countries.

Anticipation builds before the first beer is even poured as the queue snakes around the building and hundreds, if not thousands, of eager beer lovers await their chance to sample sought-after and rare beers. Many are bedecked in pretzel necklaces and other edible accessories, while Friday is designated dress-up day, and there are some sights to behold! Penguins, hops flowers, vikings and knights were just some of the vibrant and colourful costumes on show.

Beers are poured in 1oz (about 30ml) samples to encourage variety rather than volume, but woe betide anyone who drops their acrylic tasting cup as they are met with a loud cheer from the crowd. Even the most dedicated and die-hard beer lover would struggle to try a fraction of the beers on offer but for identifying new trends it’s the place to go.

Click through to view the six hot new trends from this year’s festival. 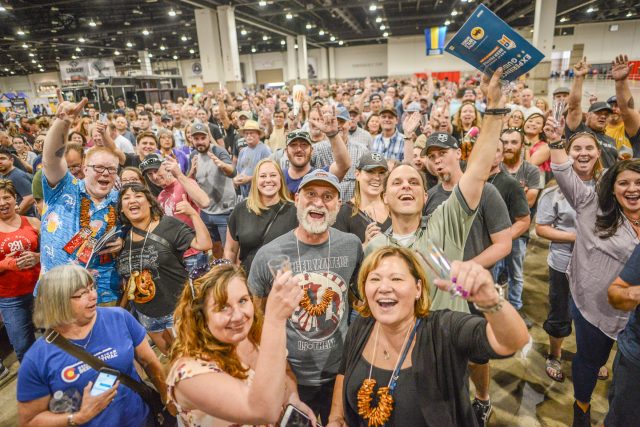 The IPA style is the rockstar of the American craft beer world and has been for many years. It accounts for 36.8% of all American craft beer sales and 77% of craft growth (according to the Brewers Association). American craft brewers love hops and continue to innovative and diversify the style with different iterations such as black IPAs, white IPAs, imperial IPAs,. West Coast IPAs, Belgian-style IPAs, Brett or Wild IPAs, red IPAs, rye IPAs, herb/spiced IPAs, hazy or juicy IPAs. They range in ABV from 4% or less to 12% of more. Juicy or Hazy IPAs (commonly known as New England) is the latest IPA craze and was judged for the first time at the GABF competition this year. The style attracted the most category entrants of all with 391 (surpassing American-style IPA, which has held top slot for over a decade) and was won by Le Jus from Alarmist Brewing in Chicago.

This year’s Festival saw a preponderance of juicy and hazy IPAs but two very different takes on the style stood out – ‘milkshake’ and ‘Brut’. Milkshake IPAs are thick, hazy, juicy and brewed with fruit hops and lactose for a full, sweet mouthfeel, while Brut IPAs are bone-dry, pale in colour and highly effervescent Beers such as Heretic Juicier Than Thou, a hazy, New England-style IPA with mango that’s full of juicy, tropical hops but smooth, refreshing and balanced at the same time, is helping to widen appeal of American craft beer and bring new consumers into the style craft beer world. The trend towards IPAs in its many incarnations continues to go from strength to strength and is unlikely to change any time soon. 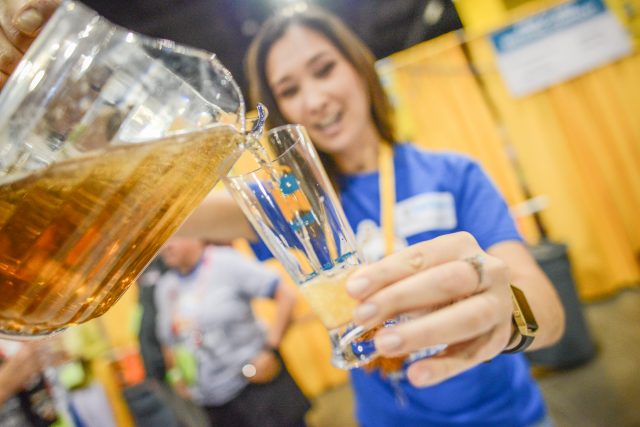 Sessionable American craft beer styles account for 26% of the growth in craft sales value, according to the Brewers Association, and many American craft brewers now have the confidence and facilities to brew perfectly crafted, clinically clean, refreshing and crisp Helles, Pilsners, Kölsch, Altbiers, Oktoberfest, Dunkels and many more. These styles appeal to young drinkers coming into the craft beer category for the first time as well as those older drinkers who entered the craft beer world at its inception, some 30-40 years ago, who are now ageing and therefore looking for something more sessionable. This trend looks set to continue. 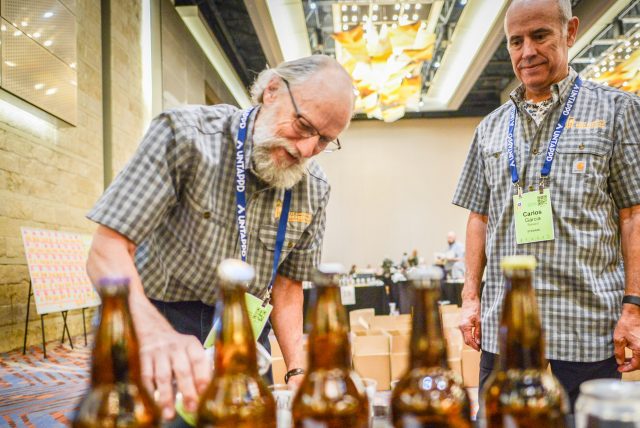 The barrel-ageing game was ramped up several notches at GABF by the addition of the new Jameson Caskmates Barrel-Aged beer garden where all beers were barrel-aged in James Irish Whiskey barrels, Cigar City Beoir Le Caife, a brown ale brewed with lactose and Jameson-rested coffee beans then aged in Jameson Whisky Barrels was smooth and rich with a chocolate and coffee character while DC Brau Your Pet Cow imperial milk stout, a playful riff on an American stout, used lactose for an inspirational twist on a classic fortified stout from a bygone era of British brewing tradition, and had a more pronounced hop character.

Elsewhere in the Festival beers aged in oak barrels or those previously holding wine, gin, tequila, brandy, Bourbon and more were pouring like Three Weavers Extraordinary Humans Bourbon Barrel-Aged Imperial Oatmeal Porter with vanilla and lactose, a luscious imperial porter aged in Willett bourbon barrels for 14 months, one sip of this decadent darkness is like a big oaky hug! Not all were knock-your-socks-off imperial stouts over 12% ABV, although there were plenty of these up for grabs, some of the more nuanced and elegant barrel-aged beers were sour beers aged in oak barrels with fruit added. 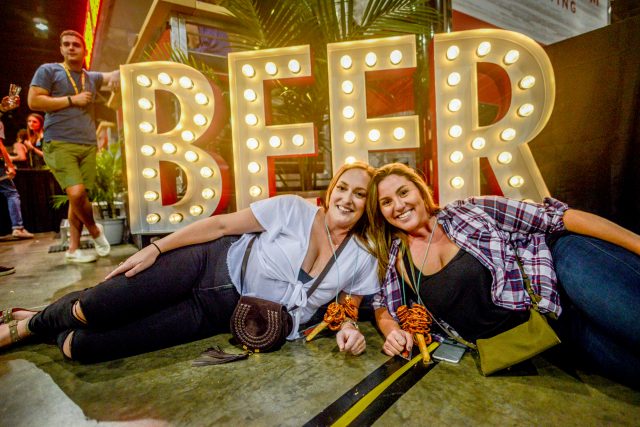 Sour beers with fruit are nothing new, but vegetable and savoury sours are a whole new ball game. One of the hottest beers of the Festival was a Spaghetti Gose from Weldwerks Brewing Co. Brewed with roasted tomatoes, fresh basil, oregano, sea salt and spaghetti pasta it tasted just like a plateful of pasta smothered in tomato sauce! Also on point was Odell Green Coyote Tomatillo Sour, a bright, crisp take on a classic German-style Berliner Weisse using a bountiful spring harvest of tomatillo fruit to create a slight sweetness and tangy bite with subtle notes of kiwi, cucumber and lemon to complement the tartness. Other beers featured kale, mint, rosemary, jalapeno peppers and shiitake mushrooms to name but a few. Are these styles likely to become a mass-market trend? Probably not, but they demonstrate the ground-breaking creativity of American craft brewers. 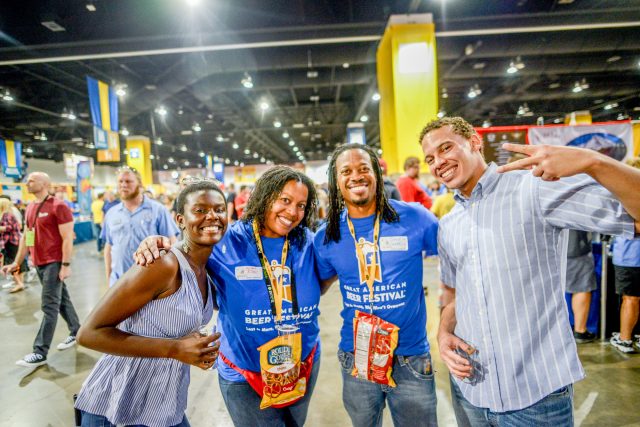 Whether this is a trend or a gimmick remains to be seen, but the use of wine yeast, wine barrels and wine ingredients served to blur the lines between grape and grain, for example, new Oskar Blues Guns n Rosé is a rosé style ale brewed with hibiscus and prickly pear and based on rosé wine while Orpheus Chaos Night and Dark is a fruited barrel-aged wild ale blended with spontaneous and wild ales for two years in barrels then re-fermented with merlot and old vine zinfandel grape must, blackberries and blueberries.

American craft brewers like to experiment with just about anything, edible or otherwise! Beers using tree sap, spruce tips and pine needles were in evidence while spices, herbs, chai, tea, coconut, key lime pie, peanut butter etc were all fair game for the curious brewer.

And finally, not only was brewing creativity in evidence at GABF but beer names were too with clever, witty and downright bizarre names front and centre. Favourites included: Gotta Pay the Pils, Punch You in the EyePA, Rye the Hell Not, Brettrospective, New Kids on Maibock, These Pretzels are Making Me Thirsty I Just Want to Drink Beer for Breakfast Stout and Watermelon Zombies from Outer Space. 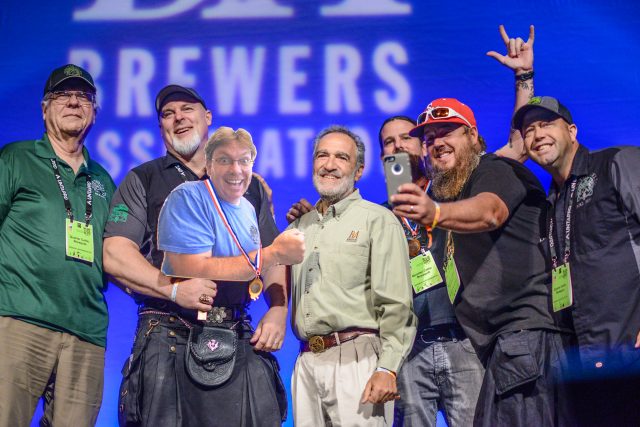 In the States there are now over 6,700 small and independent craft brewers who represent 12.7% by volume of the overall American beer market. Global export of American craft beer grew 3.6% in 2017 to total 482,309 barrels with a value of £125.4 million (the latest figures available). Canada is the largest export market for American craft beer with 51.3%, followed by the UK with 10.5%, Sweden with 6.7%, Korea with 4.6% and Australia with 3.8%. The global thirst for high quality, diverse and innovative American craft beers shows no sign of relenting and once the above trends ripple out from the States expect to see yet more craft beer options in Europe.