A staunch advocate of natural wine, Legeron founded the RAW wine fair in 2012 – dedicated to natural, organic and biodynamic wines – with the concept recently expanding to include annual events in Berlin, New York and Los Angeles. Prior to Raw, Legeron consulted for restaurants in London including the two-Michelin starred Hibiscus in Mayfair, Borough Market local, Elliot’s, and The Richmond in Hackney. She has also hosted her own TV shows including That Crazy French Women and Journey into Wine. Last year Legeron was awarded the WSET’s first Outstanding Alumni Award, voted for by WSET Diploma graduates, having completed her WSET Diploma in 2003, and went on to become France’s first female MW. Since then, she has made it her mission to raise the profile not only of natural wines, but increase consumer awareness of the level of sulphites in wine and boost routes to market for producers of wines that are created using natural farming methods and low-intervention vinification techniques. When she’s not promoting the producers of natural wines, the fearless MW is happiest foraging for mushrooms, watching boxsets of Nordic Noir and making home-made tea. 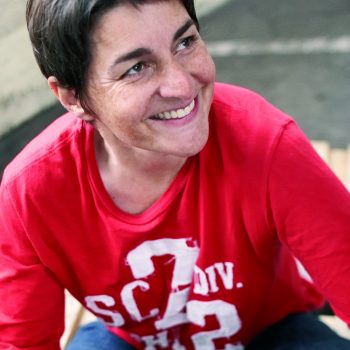 Wine feels like home to me. When I was a kid, a drop of wine in our water was our version of cordial. And yes, my family is stereotypically French – a band of gregarious, beret-wearing, accordion-playing, garlic-smelling, belotte-playing, merry-making farmers.

A wine that has accidentally re-fermented in bottle. Seemingly ‘normal’ looking on the outside, it’s a bit of a misfit and no one’s quite sure how to handle it.

I am a country bumpkin at heart even though I have been London-based for over 20 years now. I am at my happiest foraging for mushrooms or plants to make my own teas. There is nothing like leaving London in the small hours and driving to the New Forest, in time to hit the first light of morning as it streams through the trees, with breakfast, a flask of coffee and dog in tow. That’s the only way I can really switch off.

Binge watching a great TV series. It happens extremely rarely but has happened, and what luxury when it does. There’s nothing quite like totally immersing yourself in an entire series of The Sopranos, The Wire or a brilliant Nordic noir all at once, without even getting out of your pyjamas.

Feel the fear and do it anyway. Building RAW WINE up has been a huge learning curve, punctuated with lots of jumping-off-the-cliff-without-a-parachute moments. Often following your heart can be quite tricky. Be it deciding to work with natural wine when I became an MW and all my wine colleagues telling me it was career suicide, or picking Los Angeles when everyone said we should go to San Francisco, or even deciding to charge a small fee to the trade for this year’s London edition of the fair, I have had to learn to trust, and follow, my instincts but it is not always easy.

Casot des Mailloles, Le Blanc du Casot 2008. When my partner and I got engaged, this is what we celebrated with. Alain Castex is one of my favourite producers and that particular wine of his brings back very happy memories.

The best and worst are two sides of the same coin. The best is that we can work very closely with nature and the environment, and that as an industry we can make a huge difference by supporting those who farm well. I have witnessed firsthand the impact of conventional agriculture and seeing the result is desperately sad. Over the course of about a decade, I watched my own family farm and vineyard transform from being vibrant eco-systems where wild salads, asparagus and even trees would sprout between the vines, and where we could collect snails to feed our ducks, into a virtual desert devoid of life except for our heavily-sprayed vines in their machine-compacted soil. I didn’t understand what I was witnessing at the time but when I look back now, I wish I could reach into the past and cry stop. It’s definitely the worst thing about our business. It is easy to hide behind pretty packaging and labels that talk about terroir and butterflies whilst polluting the land, and we’re too complacent as an industry. We need to focus as much on how vines are farmed and wine is made as on how it tastes.

To actually make my own wine from grapes I farmed myself!

The more diverse and eclectic the better, but my table would definitely include a host of unexpected environmentalists: Masanobu Fukuoka (for his revolutionary farming), Leonardo DiCaprio (for his LDF and the remarkable use of his fame) and Noah from the Old Testament (because he knows a thing or two about saving animals from extinction).

I am not sure I understand the question. As you can imagine I don’t rate Parker very much.

Mechtild from the Gut Oggau – served out of a Nebuchadnezzar – because it is one of the best white wines to come out of Austria. It’s always a treat to drink and what better way to bid me farewell than with a glass of a resolute matriarch in hand. After all, she is – as Gut Oggau describes her – someone who “polarizes opinion” and “defies all of life’s trials and tribulations like a gnarled oak in a storm”.