James Grundy and Felix James have launched what they claim is the world’s first ‘small beer’ brewery in London’s Bermondsey, dedicated to brewing beers between 0.5% and 2.8.% ABV.

With session beer having taken off in the US and the low-alcohol sector on the rise, Grundy and James hope that their new beer, with a lower ABV than is traditionally associated with session beer, will deliver in flavour what it lacks in alcohol.

The pair are launching two new lager beers into the UK market: a Pilsner-style lager made with British malt and Saaz hops (2.1% ABV) and a dark lager (1% ABV) described as having “dark berry fruit on the nose” and a “coffee-like palate and smoky finish”.

Speaking to the drinks business, Grundy said: “Within the beer sector, we found there was simply not an option that offered the same flavour experience as a 4.5%-5% beer. Lower ABV (around 1.2%) didn’t exist in the UK market, and the 0.5% examples, often seen as non-alcoholic, weren’t competing when it came to flavour and drinking experience”.

“In today’s busy world when people’s lives are going at 110mph, we believe consumers still want to enjoy those social occasions over a really good beer, yet still be able to make that early meeting / gym class / school run with a fresh head the following day”.

This led them to launch a brewery dedicated to the production of ‘small beer’ which they define as at between 0.5% and 2.8% ABV.

Also known as table beer, the term small beer is rooted in history with its production dating back centuries to a time when it was considered an everyday refreshment. Although teetotallers were not unheard of in Britain as early as 18th century – writer Samuel Johnson was a keen proponent – there was nevertheless an unreliable supply of clean drinking water, with most preferring to opt for beer.

Much as it today, small beer was enjoyed as its low alcohol content meant that it could be consumed without the person becoming intoxicated after only a few glasses.

To prove this point, William Hogarth, in his print entitled Beer Street (1751), depicts workers holding tankards brimming with beer, going about their daily routine. In the background, roofers can be seen perched on top of a building, enjoying a beer break on the job.

While Small Beer Brew Co. certainly does not propose drinking its beers while sitting precariously on a pitched roof, this example does nevertheless explain in part why they are wanting to revive the sector.

Grundy said: “Felix and I found ourselves looking at the pumps in pubs and bars, searching out the lowest ABV – at best they were at around the high 3s or early 4s. Sometimes you would get lucky with a good beer, at other times we were left wanting.”

“We believed there was a vast gap in the market and high consumer demand. Small beer played such a large part in society in the 1700s albeit for very different reasons. However, with the improvement of water filtration techniques in the late 18th century, the craft for producing small beer was lost”.

With James’ experience in beer, the pair have “reworked the entire brew process” allowing them to naturally maximise flavour and minimise alcohol. But it wasn’t all plain sailing.

“Following the planning and design stage, we had a very amusing conversation with the brewery team who we commissioned to take on the build,” said Grundy.

This kit allows Small Beer to brew to strength. Grundy added: “We don’t cook off the alcohol to lower the ABV, nor do we strip it out through reverse osmosis”.

Having worked on the project for the past 15 months, both Grundy and James have spent their weekends brewing, tweaking and re-working both the recipes and the kit as they went. Having dipped into their own savings, they also secured funding from a group of private investors and now have a registered site in south London. 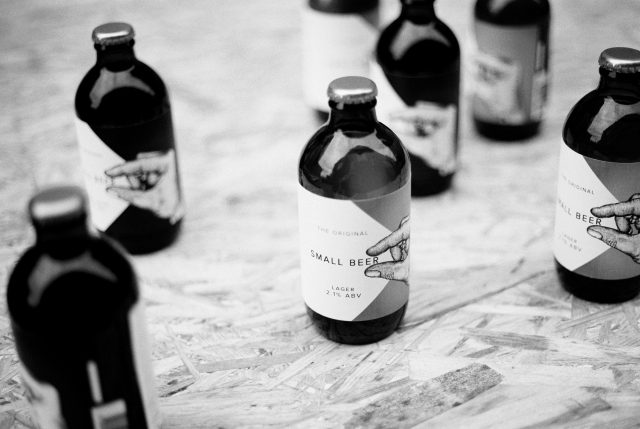 Grundy, who joined Sipsmith in 2010, a year after it was founded, having started out in drinks at Majestic Wine, believes the experience gained at the London distillery helped him to start afresh in beer.

“Our time at Sipsmith was unquestionably a huge help,” he told db. “It gave us the opportunity to develop a brand from the very grass-roots and to further develop our love for the industry. It also reinforced the importance of quality and taste credentials, not just a brand stamp.”

The pair hope to roll out their beers across the UK in due course.

In addition to focusing on low-alcohol but big flavour, Grundy and James have made a commitment to sustainability.

They produce all boxes, labels and business cards from recycled paper and have reduced the pints of water required per pint of beer from up to 10 to just 1.5. In addition, they have adopted a ‘dry floor policy’.

“You won’t see us hosing down the floor with gallons of water,” said Grundy. “We run an entirely dry floor policy at the brewery, and as we know, this is the first such policy of its kind”.