In a recent survey of the UK hospitality industry conducted by the Kennel Club, 98% of dog friendly pubs believe that business has improved due to canines being allowed on the premises. 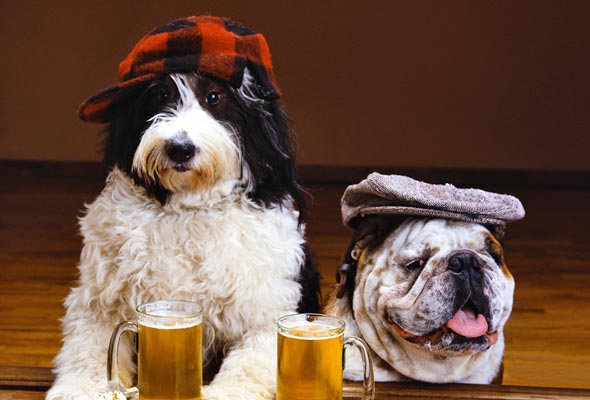 According to new research by the Kennel club, 97% of all dog friendly businesses, including pubs, cafés and restaurants, stated that our canine companions have added value to their business.

In its survey of 251 managers, the Kennel Club also revealed that 76% think health and safety laws may prevent dogs from being allowed in their establishments, when in fact this is not the case. The laws state that only food preparation areas are out of bounds and canine access to other areas, including where food is served and sold, is determined by the manager.

The current CAMRA figures reveal that 21 pubs in the UK are forced to close each week. With 8.5 million dog owners in the UK, the Kennel Club believes pubs are currently barking up the wrong tree and should be enlist the support of man’s best friend.

As part of the study, the Kennel Club found that 82% of all pub managers noticed increased levels of social interaction between guests when dogs were allowed in and 79% stated that they thought the atmosphere improved with the help of a hound.

Colin Valentine, CAMRA’s national chairman said: “CAMRA welcomes the Kennel Club’s research into the positive impact of dog-friendly pubs across the UK. Pubs play a vital part in many people’s lives, providing a place to meet and socialise and feel part of their community. It therefore makes sense that in many cases a dog-friendly policy will help attract footfall to a local, particularly when paired with some great walking routes nearby”.

“There are a number of different factors forcing British pubs to close, ranging from high business rates to competition from supermarkets. We support any measures that help publicans remain in business, which can sometimes be achieved by diversifying a pub’s offering so that more people visit. There is, however, no simple solution to solving Britain’s pub crisis, and it is up to the individual publican to decide what the right business decision is for their pub”.

73% of businesses within the hospitality industry, which currently do not allow dogs, told the Kennel Club that they would consider amending their policies if owners could prove that their animals would behave.

Caroline Kisko, Kennel Club secretary added: “This new research proves just how effective a dog friendly policy can be in ensuring a business’s survival. British pubs are an integral part of our society and whilst it is important that the public should support them, it is also essential that pub owners do everything within their power to make their venue the kind of place people will want to visit time and again.

“Dog owners and their pets are a key part of any community and as these statistics show, they have proven themselves to be an asset to many pubs across the country by spending their time and money as well as helping to create a nicer atmosphere”.

Pubs may have a further incentive to increase canine access. American company Apollo Peak recently released a wine range for pooches, including a ‘Chardognay, ‘Malbark’ and ‘Zinfantail’, along with a ‘Champagne’ made with chicken and apple, and a ‘Doggy Mary’ cocktail made with natural bacon flavourings.

This follows the launch of Woof & Brew’s Pawsecco, a non-alcoholic, non-carbonated ‘wine’ suitable for both dogs and cats.

If your mutt prefers a pint to a Pawsecco, they might like to try ‘Bottom Sniffer’ a non-alcoholic brew made from non-fermented beer wort, comprised of water, barley malt, Bladderwack seaweed, chicken flavouring, burdock, dandelion, flax and nettle.

This news comes as the Kennel Club holds its annual Be Dog Friendly Week (24 July – 28 July) which encourages more business to adopt a ‘dog friendly attitude’.

Bar for dogs to open in Chelsea