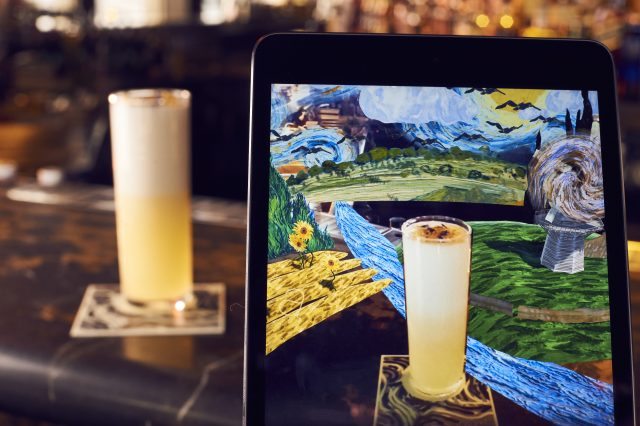 Jamie Jones told db that he wanted to find the middle ground between the theatrical, multi-sensory and surrealist serves at the Artesian ­- its extraordinary array of drinking accoutrements “would be impractical in a restaurant” – and the stripped back, visceral elegance of the White Lyan.

Jones had dreamt up the idea well before the Pokemon-Go phenomenon and admitted he was worried that the gaming sensation “would pinch his idea.” Fortunately for him, the world of augmented reality has thus far remained restricted to finding a wild ‘Pidgey’ rather than a pomelo and samphire cordial.

The menu explores art through the ages, deriving inspiration from Michelangelo and Van Gogh through to Andy Warhol and Banksy.

The process: Upon booking, customers are invited to download a purpose-built app, created by Mustard Designs. The app, in terms of MB, will be around “the same size as Facebook,” Atherton said.

The cocktail will be served up accompanied by a special coaster. To view the cocktail in augmented reality, simply open the app, point and focus the camera on the coaster and the cocktail will come to life. The animations can be captured either in a photo or video.

The app then allows sippers to save, email and share their photos/videos on social media. The public launch, according to Atherton, is set for mid-June.

Click through the following pages to uncover the full Mirage menu. 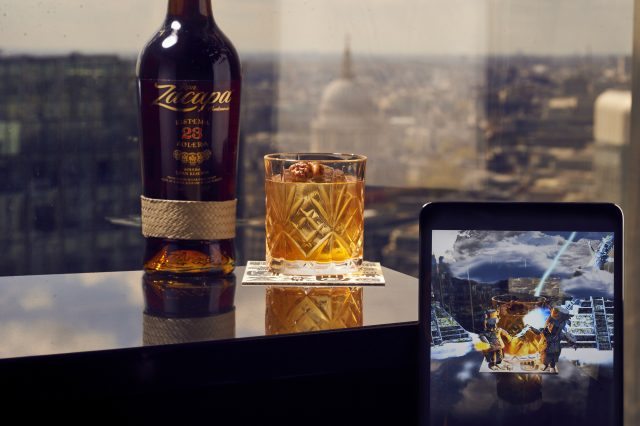 Inspired by the intricate and textural complexity of Mayan carvings – an empire than once encompassed southeastern Mexico, Guatemala, Belize and the western portions of Honduras and El Salvador – Huracan is wonderfully warming and nutty, with notes of dried fruit and coffee – the sweetness of the honey tempered by a hit of cacao.

The animation features two stone temples complete with steps as well as three stone statues that have come to life. Storm clouds circle ominously with flashes of lightening striking the cocktail in the centre.

This is Jason Atherton’s favourite, and certainly, for me, one of the stand-out drinks on the menu. The perfect end to a meal as you gaze out at London’s impressive skyline from the 24th floor of Tower 42. 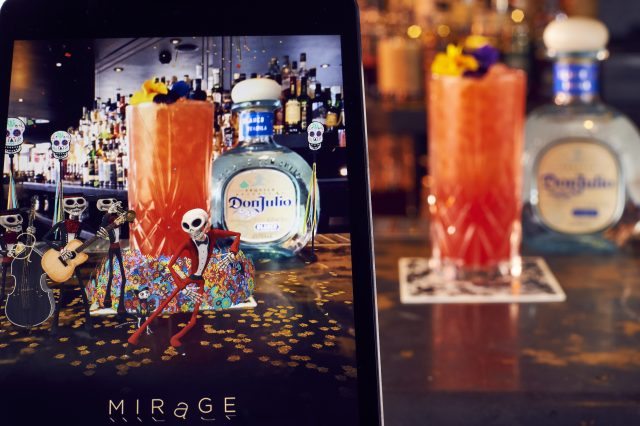 Sangrita, traditionally sipped alongside tequila, literally translates as ‘little blood’ – something the Aztecs were certainly unafraid of spilling. Red in colour, it is non-alcoholic and usually includes pepper powder, spices, pomegranate, orange and lime.

With this cocktail, Jones wanted to express another side of tequila, rather than resorting to the traditional pairing with lime.

The animation features a skeletal rock band, complete with floating skulls and a floral garland surrounding the cocktail.

Fruity, with a pronounced acidic kick from the tequila, Calavera mellows into a spicy, almost smoky finish. A very pleasant surprise and ideal for those looking to branch out from a margarita. 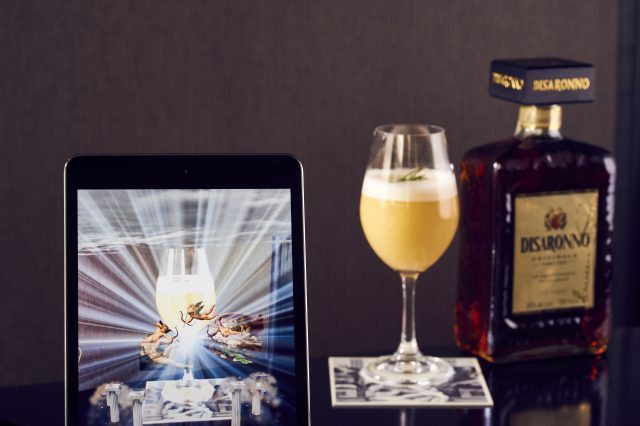 Crossing the Atlantic to Italy, The Creation fast-forwards to the 15th and 16th centuries and the height of the Renaissance. Named after Michelangelo’s The Creation of Adam on the ceiling of the Sistine Chapel, The Creation combines Disaronno, sparkling pear, cumin, olive oil, lemon and egg white.

The animation is appropriately celestial with figures from Michelangelo’s fresco masterpiece floating across the screen, surrounded by remnants of classical Roman architecture.

A homage to Hendricks and Victoriana, Dogstone brew is inspired by the gin brand’s iconic imagery, which in turn, is indebted to Monty Python’s Terry Gilliam. Celebrating the Victorian love of flora, fauna and hothouses, Dogstone Brew combines the cucumber and rose infused Hendrick’s gin with Italicus, bergamot, black tea split milk, port and orchid root.

The animation is remarkably detailed and includes someone inflating a giant cucumber, cucumber and rose hot air balloons and a giraffe playing the trumpet.

A take on a milk punch, Dogstone brew is both light and floral, and silky and creamy. Served in a glass tea cup, this dainty, powder-pink sip is subtle but also aromatic. 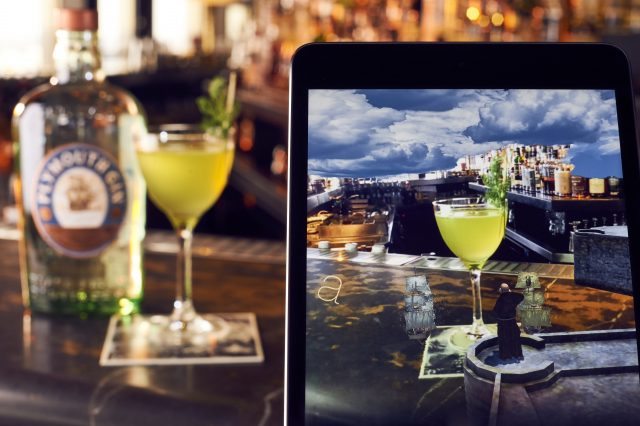 A tribute to Plymouth gin, the prowess of the British Navy and the long naval art tradition, Sea Marshall combines Plymouth gin, pomelo and samphire cordial, dry vermouth and aquavit.

The animation celebrates the history of Plymouth gin and its association with the British Navy. Two ships fire canons at each other, whilst a monk looks on, a reference to Plymouth’s Black Friars distillery, a former monastery.

Fresh and green with an addictively salty tang, Sea Marshall would be the ideal start to a meal.

The animation is a Van Gogh montage, taking elements from works such as Wheatfield with Crows 1890, it also includes a moving windmill and Van Gogh’s famous sunflowers. Jones stated that he wanted customers “to feel like they were in the painting.”

Surprisingly light, Wheatfields with Fizz is, dare I say it, a grown-up take on a shandy. This comparison does it a disservice however, as this is another stand-out serve. Refreshing lemon combines beautifully with floral notes from the elderflower liqueur and bee pollen – the bitterness of the lager cutting through the sweetness and the egg white. A well-balanced refreshing drink, great for when the sun comes out. 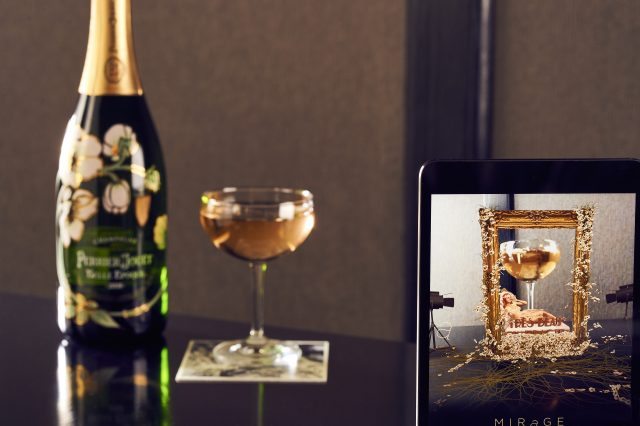 Unashamedly extravagant, Sashay is influenced by the early 20th century movement Art Nouveau, a movement that also inspires Perrier-Jouet’s elegant bottle designs. Mixing Perrier Jouet Belle Epoque, Japanese plum wine, jasmine and liquorice, Sashay is wonderfully aromatic without being cloying. An indulgent and sophisticated start to the meal, the jasmine and liquorice pairs well with the white peach, citrus and brioche notes from the Champagne.

The animation includes an ornate gold picture frame encrusted with delicate white flowers. A glamourous woman reclines on a white satin chaise lounge, holding up her coupe of Champagne inviting you to join her. 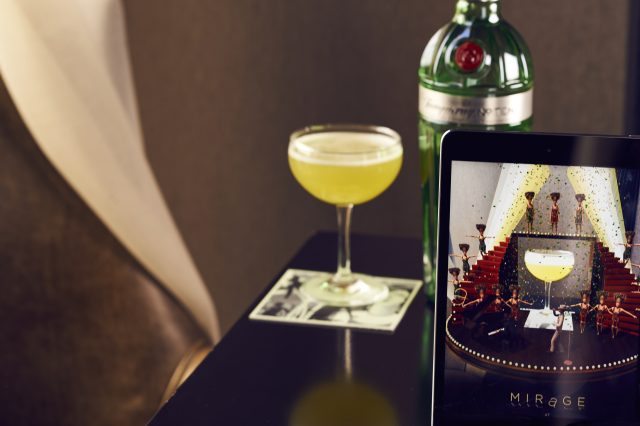 Tallulah harks back to the 1920s during Prohibition, though fortunately the gin-based cocktail is not mixed in a bathtub. Tallulah, the name perhaps a reference to Speakeasy singer Tallulah in Alan Parker’s Bugsy Malone, combines Tanqueray Ten gin, chamomile, Moet and Chandon Champagne, pineapple, vanilla, tarragon, lemon.

The animation oozes Art Deco glitz and razzmatazz with a series of dancing showgirls, stage lights and glitter falling from the ceiling.

As the name and animation suggest, this sip is the antithesis of subtle. The cocktail is a complex balance of the sweetness of the pineapple and vanilla counteracted by the aniseed flavour of the tarragon, the acidity of the lemon and Champagne and the punchy juniper from the Tanqueray. 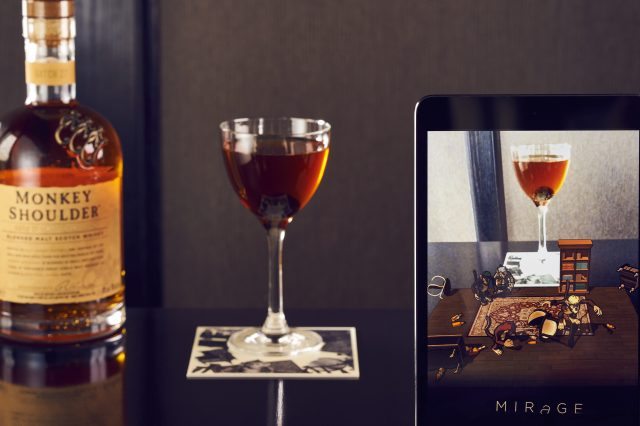 In reference to the name of the whisky, the animation portrays a group of cartoon monkeys trashing a gentleman’s lounge complete with a globe that lifts to reveal a drinks cabinet. The term ‘monkey shoulder’ is actually a reference to a condition that maltmen suffered when working long shifts, turning the barley by hand. It caused their arms to hang down in a fashion reminiscent of a monkey. 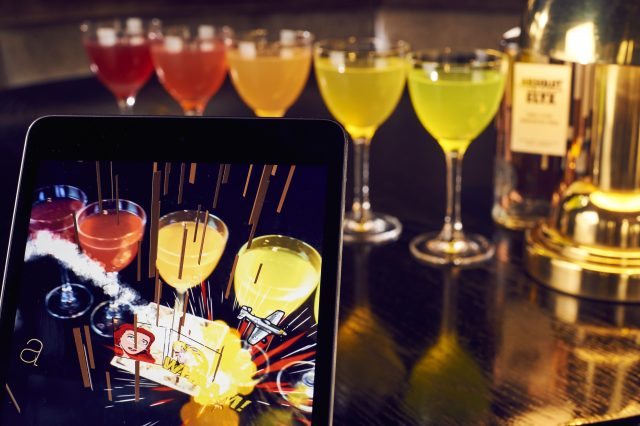 Made out of Skittles, the colourful confectionary staple, Taste the Rainbow appeals to your inner child. It is entirely up to the bartender as to which flavour you receive, though considering the strong aversions to certain colours usually loudly expressed when a packet is opened, this could be a problem!

A tribute to the pop art movement, the animation borrows from both Roy Lichtenstein and Andy Warhol with famous figures from their works helping to tell a story.

Skittles are joined by Absolut Elyx, Fanta reduction, white grape and lime. Guaranteed to make you smile, these vibrant sips really do taste exactly like a liquid version of the fruity sweet treats. 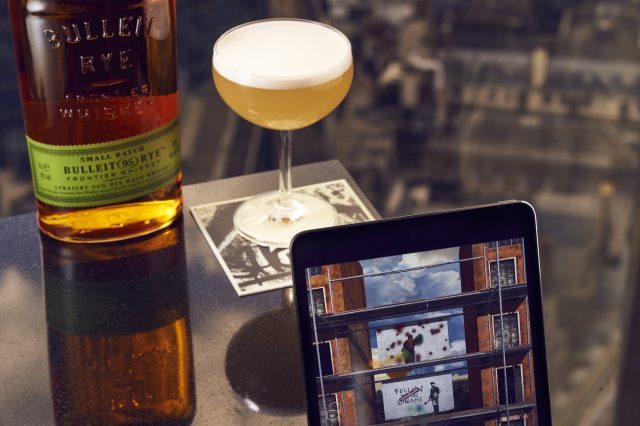 The Mild, Mild West may take artistic inspiration from Banksy, but the flavours are a tribute to the great American Western. The cocktail mixes Bulleit Rye, Gewurtztraminer, watermelon, pickled cactus and egg white. Unlike anything I’ve ever tried before, The Mild, Mild West is simultaneously aromatic, fruity, sweet and sour.

The animation tips its hat to Banksy, recreating the construction of his work, created in 1999 in Bristol. The original work depicts a teddy bear throwing a molotov cocktail at three riot police. 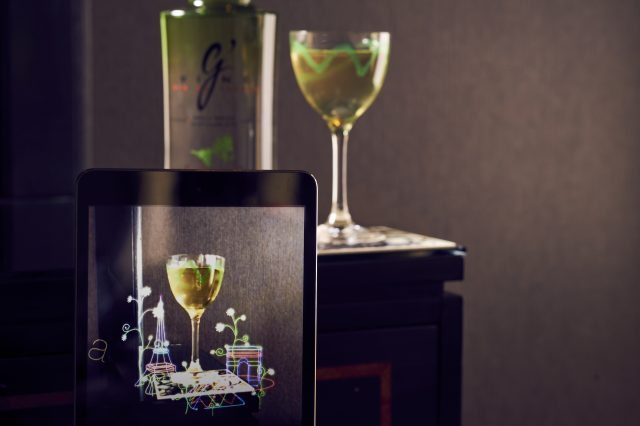 Last but not least, Avant-Garde completes the artistic journey through the ages, evoking elements of Post-Modernism. The French G’Vine Floraison gin is added to sugersnap pea, lychee, Sauternes and green apple.

Representing, as the name suggests, an experimental break from the norm, certainly epitomised by the creativity of the modern gin renaissance, Avant-Garde balances floral notes with crisp, green apple, aromatic lychees and the unctuous, honeyed sweetness of Sauternes. This is not a particularly sweet cocktail however – the Sauternes is used in moderation resulting in a refreshingly refined sip.

The animation features neon reconstructions of famous Paris monuments such as the Eiffel Tower, the Arc de Triomphe and the Louvre Pyramid, the flowers representing the botanicals found in the gin.