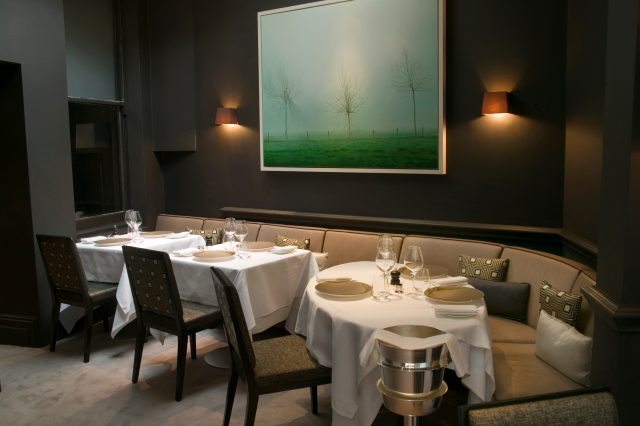 The concept: Named after the quiet Kensington street it resides on, Launceston Place is best known for being Princess Diana’s favourite restaurant. Occupying the ground floor of a pretty townhouse far from London’s maddening crowds, it’s easy to see why the chicest restaurant in the D&D London stable would have appealed to Diana. Its sprawling setting is all secret staircases and cosy connecting rooms.

The décor: There’s something very homely and private about the space. It feels as if you’re dining at a wealthy aunt’s house rather than a fine dining restaurant. The colour scheme is muted and safe – banquettes are beige and walls a sombre shade of grey, hung with Hockney-like paintings of lifeless, leafless trees, spindly branches snapping in the wind.

The food: Launceston Place opened in 1986 and has lived through a number of incarnations, none of which have veered wildly from its signature offering of refined French cuisine with a British twist.

Having lost its Michelin star last year, newly appointed chef Ben Murphy is hoping to revive its fortunes. The artfully inked 26-year-old comes by way of The Woodford in east London, voted the Evening Standard’s Restaurant of the Year 2016.

Under Murphy’s stewardship, The Woodford received a rare five-star review from the late, great AA Gill, restaurant critic of The Sunday Times, so hopes are high that he’ll soon win back Launceston’s lost star.

The dinner menu is almost audaciously confident in its brevity – offering just four starters, mains and desserts. I admire Murphy’s decision to keep the menu curt – too many options smacks of trying too hard to please and often results in a loss of focus.

Murphy’s cooking philosophy is simple – to maximise the flavour of seasonal ingredients. This approach is evident in one of the standout dishes of the night – a medley of mushrooms flecked with shards of salty Parmesan and topped with a savoury yeast foam. Far from a token veggie offering, the dish is a textural tribute to the humble mushroom and its wonderful, wild, earthy flavour.

Another triumph is a clever twist on a beef Wellington where perfectly pink pigeon is given a starring role, nestled neatly in sesame seed-flecked puff pastry beneath a rich layer of foie gras in a decadent, Asian-inspired combo. It’s clear from the get go that you’re in the hands of a very capable chef.

Signature dishes: Be sure to order lashings of Murphy’s anchovy butter. Unctuous and rich, it captures the saline saltiness of the silver sea creatures.

Murphy’s sense of fun is exemplified in his Heston Blumenthal-like canapés that play on sweet and savoury. The tiny ice cream cone is filled with a scoop of umami-rich cheese, while the miniature Jammy Dodgers are piped with red pepper.

The egg and soldiers meanwhile (listed on the tasting menu but also offered as a starter) is pure comforting nostalgia. Served in a white hen’s foot egg cup, the egg is whipped into an impossibly creamy foam laced with earthy celeriac, while the soldiers are made of sweet brioche.

Murphy’s menu will change with the seasons, but a current favourite is the presa Iberica with aubergine, ponzu and crackling. The juicy pork is perfectly cooked, and the smoky aubergine and crispy crackling make for a fine pair, but I would have liked the ponzu to have asserted its citrus flavour more obviously on the plate.

The drinks: Cocktails are classic in character – a Kir Royale with a Moët & Chandon base kicked off the night in celebratory style. Polish head sommelier Piotr Pietras is keen to take diners out of their comfort zones with wines made on a small scale from lesser-known regions like Noussa in Greece and Turckheim in Alsace.

Rather than order a bottle, it makes for a far more interesting evening if you let Pietras pair small measures of wine to each dish. Among the most inspired unions was Piedrasassi Santa Barbara Syrah 2014 and the pigeon, the wines notes of raspberry, blackberry and spice pairing perfectly with the gamey meat.

Who to know: Affable and exquisitely attired Italian general manger Sandro Alessandrini will make you feel at home.

Don’t leave without: Leaving space for dessert. While so often an afterthought, Murphy has created sweets that sing with flavour and texture. Opting for the smoked lemon and hazelnut pud, the lemon was fashioned into a zingy sorbet and dollops of creamy curd amid an explosion of hazelnut foam that tasted like nocciola ice cream.

But while tradition is cosy and comforting, Murphy’s exciting, daring, contemporary dishes seem to jar with their setting. Having gone to such efforts to inject energy, texture and punchy flavours into his food, the dishes are let down by the tepid environment in which they’re served. Such culinary fireworks deserve a greater stage for the drama to unfold.

Perhaps scared to upset its regulars, Launceston Place is playing it too safe in the dining room at the moment. If it wants to stay relevant it needs to deliver the kind of experience Londoners are seeking these days – one offering exquisite food, yes, but also a relaxed, fun, engaging environment.