The Consejo Regulador for the Denominación de Origen Jerez-Xeres-Sherry is marking its 80th anniversary by launching a new website to help entice the next generation of Sherry drinkers to the category. 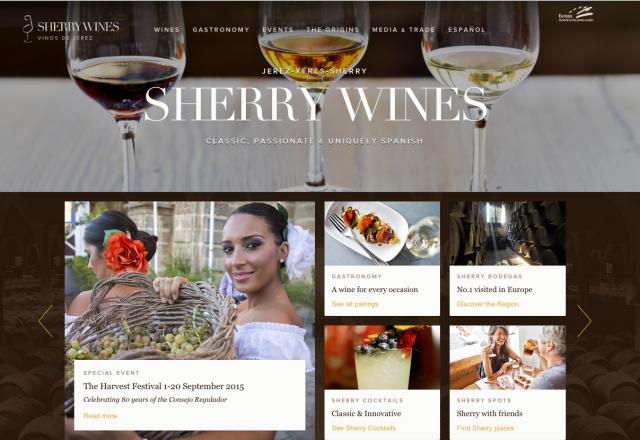 Sherry.org brings together the global marketing strategy of Sherry Wines, unifying the brand on a worldwide platform with a consistent message. One of its aims will be to communicate the fact hat Sherry is indeed a wine, and a versatile one at that, helping to move consumers away from the traditional image of Sherry being limited to a pre-lunch aperitif.

The website will feature a new “gastronomy” section detailing food and Sherry pairings, from sushi in Japan to being poured over ice cream in England, helping to communicate the message that there is a style of Sherry to suit every occasion. Other new sections on the site include sherry cocktails, with the recipes of winning cocktails from the annual Sherry Cocktail Competition in the US, set to be posted regularly. A downloadable guide will be available for those less experienced in Sherry describing each style and its taste and offering food pairing suggestions.

A “Sherry Spots” section will highlight bars and restaurants from all over the world that serve sherry, with a dedicated section for Sherry events, such as tastings and seminars, taking place around the world.

“The new website combines deep roots with a projection towards the future,” said Cesar Saldaña, director general of the Consejo Regulador. “We are appealing to a new generation of Sherry drinkers. Sherry is integrally tied-up with the culture of this region, of Andalucia. There’s lots of passion here, and we want that to be a part of our identity.”

In addition the site will feature the upcoming International Sherry Week (2-8 November), with bars and wine merchants planning events able to list them on the website.

The site will be available in English and Spanish at first, with German and Dutch versions launching in October. The DO of Jerez-Xeres-Sherry was founded in 1935, making it the oldest DO in Spain.