The French criminal court has launched its first ever criminal investigation into the death of a winemaker caused by sustained pesticide use over four decades. 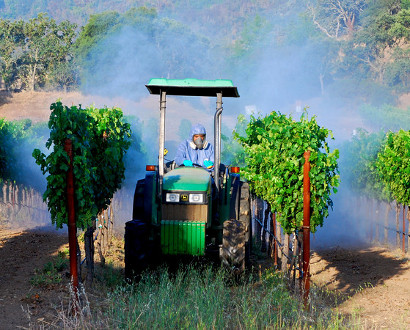 James-Bernard Murat died of lung cancer in 2012 having spent 40 years spraying carcinogenic pesticides on his Bordeaux grapes at his vineyard in southwestern France.

The pesticides, which contain sodium arsenite, are now banned, but were used by Murat to treat his vines for esca, a parasitic fungi that attacks the trunks of grapevines.

The French court has now launched an inquiry into Murat’s “involuntary homicide” after his death was formally linked to his profession.

According to reports by The Telegraph, the court is seeking to determine those responsible for “involuntary homicide, fraud and failure to offer aid”.

“Until now, the official line has been that my father got cancer because he had wrongly used the products sold to him”, said Murat’s daughter Valérie, who filed a legal complaint in April.

“The industrial chemical giants are now going to have to take responsibility for their role [in his death],” she told Nouvel Obs.

Murat only used the pesticides three times a year, but over a sustained 40 year period.

“The companies have always sworn that chronic inhalation in “homoeopathic doses” posed no danger to human health”, added Ms Murat. “The inquiry will determine who was right and who was lying.”

The case is likely to set a precedent over the use of pesticides in France, perhaps opening the door to cases against other pesticide producers.

Ms Murat’s lawyer, François Lafforgue, said around 40 legal complaints are currently under way concerning French farmers suffering from diseases they say are linked to pesticide use.

While France is Europe’s biggest user of pesticides, spraying around 60,000 tonnes on crops every year, it has pledged to cut pesticide use by 50% by 2018.