A German entrepreneur has trademarked the word “Grexit”, referring to Greece’s possible exit from the Euro, and is launching a satirical vodka-based drink off the back of it. 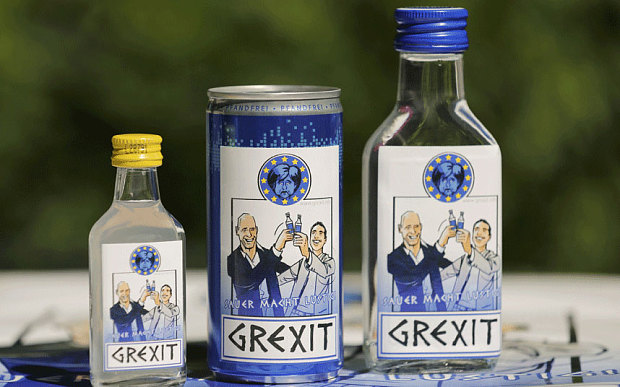 Tapping into the animosity between Greece and Germany, Uwe Dahlhoff is encouraging people to drink to Greece’s potential exit from the Eurozone, launching a satirical vodka brand mocking German chancellor Angela Merkel.

Grexit’s label depicts Greek prime minister Alexis Tsipras and finance minister Yanis Varoufakis raising a drink underneath a European Union flag with Angela Merkel’s face surrounded by a circle of stars.
It’s tagline, “sauer macht lustig”, roughly translates to “even sour fruit is good”, which is similar in meaning to the English phrase “when life gives you lemons, make lemonade”.

The lemon vodka schnapps will be available in 2cl and 100ml bottles and will cost as little as €0.59 a bottle, inspired by Greece’s economic crisis.

“Some people are satirizing the situation in pint and on TV. I’m doing it on a bottle. Lots of people understand that it is supposed to be satirical,” Dahlhoff told Global Post.

Dahlhoff insists that the product is not intended to cause offence but to make people think about the Greek financial crisis, “or to think about it all at all, and to look at how serious the situation really is.”

Greece rejected further bailouts in a referendum on Sunday, plunging the country into further financial uncertainty.