‘Kiss Cam’ couple drench each other in beer

A couple at a Dodgers versus Giants game decided not to go for the public smooch when caught on the stadium “Kiss Cam”. 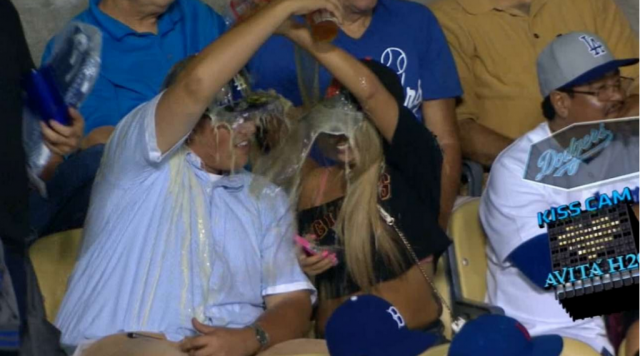 Attending the game between the Los Angeles Dodgers and San Francisco Giants on Tuesday night, the pair were singled out by a cameraman during a break in play and flashed up on the big screen.

Rather than giving each other a quick peck on the lips as usually happens, the couple – each wearing a baseball cap from a different team – decided to pour their beers over each other instead, laughing as they did so; a move that went down well with the ballpark crowd.

They might not have been laughing so much spending the rest of the game (which the Dodgers won 4-2) soaking wet and having to spend $20-$30 getting new beers, however.

The best beer-related Kiss Cam moment seen by the writer, was at a CFL game between the BC Lions and Winnipeg Blue Bombers, when an eagle-eyed cameraman picked out a man in the crowd who thought it would be very clever to parody the Kiss Cam couples by kissing his mug of beer instead.

Eyes closed as he planted a smacker on the condensation-laced plastic he opened them again as the crowd roared, to see himself on the stadium big-screen, lips still stuck to the side of the cup.

All he could do was close his eyes again in embarrassment and smile in the knowledge that he’d been caught out.