Speyside whisky producer Glenfarclas has confirmed plans to introduce a 1966 fino Sherry cask expression as the first part of a new series.

A total of 1,400 bottles have been filled from four fino casks which were discovered in the Glenfarclas warehouses last year.

“We didn’t realise we had this,” admitted George Grant, sales director at Glenfarclas. After realising that a group of casks had been seasoned with something other than the oloroso Sherry more normally used by the brand, the team consulted diaries kept by Grant’s grandfather and discovered that he had purchased some fino casks from an Edinburgh broker.

Pointing to the lighter fino character that appears on the nose in contrast to the brand’s typically richer style, Grant suggested that the familiar Glenfarclas expression then emerges on the palate, although he added: “it doesn’t have the bitter chocolate flavours.”

Having bottled the whisky in December last year, Glenfarclas now plans to release it around the world in early November. Although precise allocations and price are yet to be confirmed, the UK is expected to receive around 300 bottles, priced at about £750-800 each. 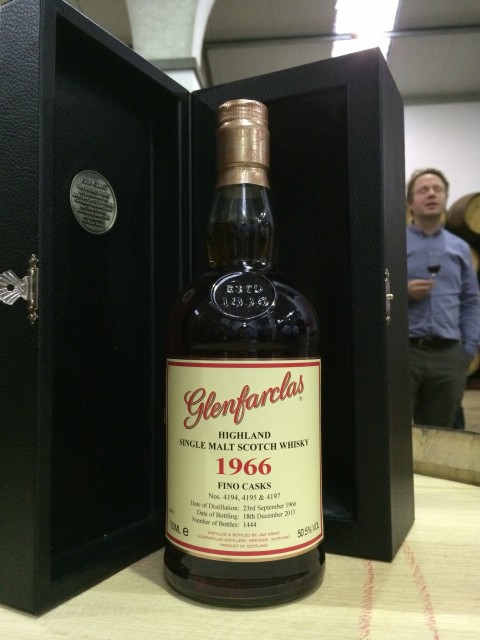 Each bottle is packaged in a black box bearing a silver coin which features an image of John Grant, who founded the distillery six generations ago.

It marks the first in a series of six different Glenfarclas special releases, one for each generation of the family. “Another one is coming on board that is going to be totally different,” hinted Grant at the future development of this series.

Although confirming that the distillery had produced fino cask-aged whiskies before, Grant noted that these had been “much younger” expressions than the new release.

“We did an experiment with different casks and realised that oloroso matched our whiskies best,” he recalled. “Most people like a fuller flavour but there are always people looking for something different.”

Commenting on the market’s interest in this type of release, Guy Hodcroft, assistant wine & spirit buyer for luxury UK retailer Selfridges, remarked: “We do very well with their family cask whiskies – the vintage date really works. We’ll have to wait for the price but this is interesting, with the date on the bottle and a limited edition so it’ll appeal to collectors.”